Scotland: The courage to grasp the future?

Does Scotland have the courage to grasp its own future, to be master of its destiny and to make decisions for Scots taken by Scots, or is Scotland going to continue to be ruled time and time again by Governments seated in Westminster, for which the majority of the Scottish people did not vote? Are the Scots going to bow to the manipulation of fear? 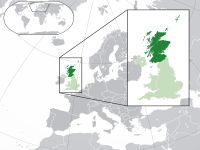 If the Scottish people by and large did not vote for the Government in Westminster, then why is it making decisions which shape the livelihoods and futures of the Scottish people and their children? Let us take a look at the opportunities which an independent Scotland could take advantage of.

If Scotland used the Scottish Pound divorced from GBP or created a new currency, it would be free to follow its own economic policies, using its currency as leverage to create jobs and wealth by favoring exports, this being translated into opportunities and work posts for its youth and added income for the State through revenue from taxation and duties.

Famous for its whisky, Scotland produces a wide range of products in numerous areas of economic activity in all three economic sectors: in the primary sector, Scotland produces barley, fish, Iron-Bru, beer, potatoes, whisky, timber, shortbread and mineral waters; in the secondary sector, from cutting-edge technologies in aerospace and naval systems to vehicles for public transportation, computer hardware and software development, from chemical products to oil and gas, electricity, electronics, pharmaceutical products and renewable energies, ships and textiles; in the tertiary sector, Scotland is also a  major player in business and financial services.

Despite the threats from London and the European Union, to make things as difficult as possible for Scotland, as they try to scare the Scottish people with hypothetical "What if..." questions, so what if Scotland left NATO? Who is going to invade Scotland, Mars? Or Burkina Faso? Maybe the Faroe Isles? And if Scotland left NATO, it would be free from its massive payment to the coffers of this organization whose annual budget is one point two trillion USD. Each year, every year. Perhaps England and the USA would like to pay rent for their bases in Scotland, bringing in more revenue. In fact, an independent Scotland would be free from the web of deceit, skulduggery, arrogance and intrusion that Washington and its NATO poodles in Europe weave and impose on other countries and cultures, creating hatred, sowing chaos and reaping terrorist threats at each and every turn. An island of peace, stability and prosperity. Respected by all, not hated.

There would also be nothing to stop Scotland becoming a Tax Haven for companies the world over to set up their headquarters, bringing added value, income and capital to the country, bringing also opportunities for its citizens.

In fact, Scotland has the full potential to become a pioneer for tomorrow, taking advantage of its formidable geo-strategic position at the southern gateway to the Arctic, the western gateway to the Baltic, the Eastern gateway to the North Atlantic, its area of influence spanning a vast area from Norway to the Americas, with untold riches lying on its northern shores, waiting to be harnessed.

Finally, tourism. From the Scottish Isles to Loch Ness, from Ben Nevis to the lochs, from that beautiful pearl, Edinburgh, to the Orkeys, to the Shetlands, from its magnificent scenery, its castles, its golf, its restaurants, gastronomy, wildlife, Scotland has the potential to become one of the world's leading tourist destinations.

What after all is holding Scotland back?