Ebola: Has the World Health Organization lost it?

Experimental and unapproved drugs are to be allowed for widespread therapies in the infected areas in West Africa, where Ebola Virus Disease has caused over 1,000 victims since March, when the first cases were reported in the Republic of Guinea. Why now, five months later, does the WHO take such an unprecedented decision when there have been no travel restrictions imposed to date? 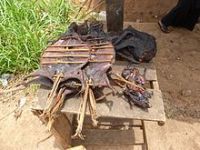 Ebola Virus Disease was first discovered in (then) Zaire, now DR Congo, in 1976 alongside the River Ebola. It is believed to be hosted in fruit bats which inhabit the densely forested areas where outbreaks begin, caused by the habit of eating bushmeat. Previous outbreaks have been caused by eating infected animals, such as chimpanzees, while the current one appears to have been caused by eating dried bats, a delicacy in that part of the Republic of Guinea and prepared precisely at that time of year (March).

The propagation of the virus then spreads among close family and friends and anyone coming into close contact with the patient, even touching the skin, during the time the patient is infectious, which means showing symptoms, this coming between two and 21 days after infection. However, male victims have the virus active in their semen for up to six to seven weeks. The symptoms include fever, sore throat, hiccups, difficulty swallowing, a rash, nausea, vomiting and diarrhea and in some cases, but not all, internal and external bleeding. Death follows closely after this.

Not all patients die: the mortality rate is up to 90 per cent, in the current outbreak it is oscillating between 50 and 60 per cent.

The virus enters the body and the Ebola virus glycoprotein (GP) is synthesized; the replication of the virus is so rapid that it surpasses the defense mechanisms of the body as the virus targets the endothelial cells. The GP binds the virus to these cells by forming a trimeric complex which helps the virus to concentrate in the interior of blood vessels. The virus then uses white blood cells as a means to transport itself around the body after overwhelming the immune system, using them as piggy-backs taking it to the lymph nodes, liver, lungs and spleen, where it constricts the blood vessels, causing massive organ failure and sometimes hemorrhage. The cell damage is the result of the release of cytokines such as TNF-alpha, IL-6, IL-8 , the molecules which cause fever and inflammation.

These mechanisms are well known. So given the highly pathogenic nature of the disease and given its easy transmission, why haven't tried and tested medicines or vaccines been developed? Because it is endemic in subtropical and tropical rain forests in Africa? And do we need a global pandemic for some real action to be taken?

The WHO, a voyeur

We already saw during the so-called Swine Flu epidemic (a name quickly changed to protect the agro-industrial lobby) how the WHO operates, namely, as a voyeur. It identifies what is happening, then tracks the spread of the disease through the six phases from start to worldwide pandemic. True, the WHO sends healthcare workers and true, the WHO puts a lot of logistic equipment on the ground and in the field. KUDOS to those health workers who risk their lives trying to save lives.

We see the same cavalier and voyeuristic attitude in the recent outbreak of Ebola. If EVD exists, and has shown what it can do in numerous outbreaks, it is not beyond the realms of possibility that it can make not only a species jump, but also break out of its normal norms of transmission, which seems to have been the case with HIV/AIDS, from SIV (Simian Immuno-Deficiency Virus). Research Green Monkey Disease.

And who can guarantee that the new untested products put forward (albeit with the best possible motives, we hope) for therapy in the current EVD outbreak will not facilitate a species or transmission jump? And what about the already existing medications which have been tried and tested in other outbreaks?

Research: Statins, ACE inhibitors, Angiotensin receptor blockers, treatment blocking sepsis (which leads to the death of so many Ebola victims).

If the agro-industrial complex can pump chicken feed full of arsenic, then let chicken carcasses and "litter" (bones, skins and feces) be fed to pigs and cows, entering our food chain and rendering basically all the meat (and fish) we eat as being wholly suspect of being poisonous, then surely it can come up with a solution to the transmission devices used by EVD. For example, reducing the viral load, for example inhibiting the docking mechanism, for example blocking the reproduction mechanism...

And the World Health Organization could start applying some sensible measures such as isolating communities at the first sign of an outbreak, banning flights to and from the country, restricting internal travel and slapping a 22-day imposed holiday on the entire region (since the  incubation period ends after 21 days).

This, and an education campaign made a part of the compulsory syllabus of middle and secondary education programs in the areas where such viruses may appear, so that people will not react in a way which fosters the spread of the virus. One cannot blame communities for reacting in ways which appear totally at odds, when nobody has explained to them what is going on.

The bottom line is, has the WHO done enough since March to contain this outbreak? No it has not, because it has acted in a cavalier way and displayed an attitude which is totally inadequate.