Ebola: Can somebody please do something?

Ebola Virus Disease has been ravaging communities since March this year when the first case was reported in the Republic of Guinea. Since then it has spread to three other countries (Liberia, Sierra Leone and now, Nigeria), has caused 932 deaths among 1,711 cases and has become the worst outbreak in history. And what has been done to prevent it? 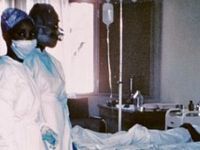 Between August 2 and 4, 108 new cases of Ebola Virus Disease (EVD) were reported (these being either laboratory-confirmed, probable or suspected cases) along with 45 deaths (10 cases and 5 deaths in the Republic of Guinea; 48 cases and 27 deaths in Liberia; 45 cases and 13 deaths in Sierra Leone; 5 cases and 0 deaths in Nigeria).

EVD can reach a mortality rate of 90 per cent, in this case the average has been between 50 and 60 per cent, currently at 54%. It was first discovered in 1976 in the Democratic Republic of Congo in a village near the river Ebola. Affecting humans and primates, the most likely carrier or origin is the fruit bat.

Symptoms appear within two to 21 days after infection, which is caused by coming into contact with the body fluids of the victim, by touching the skin or by eating infected meat (bushmeat, namely primates or bats, is considered a delicacy in parts of Africa). The onset is usually signaled by a fever, weakness, pain in the joints and muscles, headache, sore throat, then diarrhea, vomiting, a rash on the skin, liver and kidney damage and internal and external hemorrhages, bleeding from the ears, nose, eyes, mouth or even skin.

There is no approved virus or medicine available, the healthcare procedure being limited to supporting the patient while the body deals with the disease.

The recent panic among some citizens in the United States of America about the transportation of two US healthcare workers infected with EVD is a typical example of the paranoia that accompanies this disease, visible also in West Africa where people avoid contacting clinics because they think that the patients will become worse there, or that the doctors themselves have imported the virus. The bottom line for those terrified they might catch the disease is that it cannot fly and you cannot catch it unless you come into close contact with an infected person or a surface which this person has been in contact with.

The result of this ignorance is that there has been a constant chain of transmission and everyone coming into contact with a person showing symptoms is at potential risk.

Now, can someone please do something? It is all very well for the World Health Organization to call a meeting of its Emergency Committee of International Experts, in Geneva (today) but why hasn't something been done before (since March) and why does the WHO approach all outbreaks of disease in the same way, namely sitting back, informing people that the disease is spreading and refusing to impose travel restrictions? Meanwhile the disease takes hold and ah... is that the pharmaceutical lobby I can hear cheering in the background?

With a disease like this, surely there should have been a total travel ban and a one-month imposed "holiday" for all citizens to spend at home, avoid public gatherings and a helpline set up with an emergency response team on the ready to respond when called. That would have been back in March. With hundreds of new cases being reported every week, it appears that we are looking at the tip of an iceberg; imagine what will happen if this disease takes hold among Nigeria's Lagos, for example, with 21 million people.

Today, suppose there were a total travel ban into or out of these countries, a temporary restriction on movement within the countries and a call for people to stay at home? If the incubation is 21 days, we are speaking about a three-week emergency response.

If anyone wishes to invoke the economic situations of the countries where EVD has broken out, then let us remind ourselves that every year 1.7 trillion USD is spent on weapons.