Saving our planet, making a difference

Can online petitions actually do something? The answer, in three words, is Yes, they can, after 1.6 million people signed petitions delivered to Thailand to plug a loophole which allowed the sale of ivory, thus stimulating elephant poaching in Africa and Asia. Thailand now has a year to act, or else face a trade ban and wide-ranging sanctions. 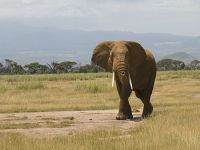 CITES (Convention on International Trade in Endangered Species of Wild Fauna and Flora) has 35,000 species listed as endangered, in most cases, the result of human activity in the beautiful home that our Planet is. The African elephant is today one of the most visible species edging towards the precipice. Since 2011, sixty thousand have been murdered. From an estimated 27 million elephants in the nineteenth century, African elephants today number 400,000 to 660,000, at most. Estimates that the animal could become extinct in fifteen years err on the side of caution: the African elephant may only exist in zoos by the end of the decade.

These wonderful animals, roaming the continent at least since 11,000 BC, live in matriarchal communities, where females take care of the calves. They have been seen to manufacture tools to use, they recognize death and enter mourning when a family member dies. They even recognize a skeleton of a deceased family member, running their trunks along the tusks and touching the head. In tears.

And what happens? Humankind encroaches on their habitat, murders them for trophies and the females and calves can only look on when an adult is butchered, sometimes hacked to death and its tusks cut out of its still living body by butchers wielding machetes, for the ivory to be sold so that someone can sport a statue or trinket on a shelf, or hanging round their neck.

Recently, one of the world's largest African elephants, called Satao, met an identical fate, one of fifty-four elephants (on average) murdered every day. That is over two per hour.

Until recently, Thailand was the world's worst culprit in presenting conditions which favoured the ivory trade, having laws which allowed the sale of ivory from Thai elephants, thus creating an easy market for African ivory to be sold alongside the domestic product. The 1.6 million-strong petition organized by the WWF and Avaaz, delivered to Thailand's government, and coupled with a threat to ban trade in all 35,000 species on CITES' lists, caused Bangkok to take action to ban the trade in ivory.

In January 2015, Thailand must report on progress made and will remain under the scrutiny of international organizations. By August 2015 it must fully comply with international law on this issue.

Since 2007, illicit trade in ivory has doubled. The main culprits are known as the Gang of Eight: three supply countries in Africa (Kenya, Uganda and Tanzania), and the market in Asia: two consumers (RP China and Thailand) and three transit countries (Malaysia, Philippines and Vietnam).

In a world in which one point seven thousand billion dollars (1.7 trillion USD) are spent annually on weapons systems for people to murder one another, surely there is money available to save endangered species and set up sustainable projects? In a world in which software has been developed to the advanced state we see today, surely an Ethical Trading Register could be drawn up, with total trade embargos slapped on countries with bad records in animal and human rights?

One thing is certain: the following generations may not have been born yet but through organisms such as CITES, the WWF and others, and the work performed by activists and journalists, our generations today are already under the spotlight. Our grandchildren should not, must not and will not forgive us.

Author's note: What can you do? Be informed, checking out CITES, the WWF and other websites, performing searches of endangered species, registering with wildlife organizations, networking with others, holding meetings to draw up plans of action. One of these I suggest is the formation of an international Ethical Trading Register, which contains the trading actions performed by each country including figures on their own history of animal and human rights. Why not broaden this Register to include foodstuffs, with clear information on labels, including health warnings, as on cigarette packets? Another, why not use the word "murder" with regard to the voluntary termination of an animal's life?

18:30
Kremlin calls Johnson "Freud's dream" after his words about Putin
17:50
Zelensky's office names the amount of money Ukraine needs to restore its economy
17:20
Zelensky compares NATO to policy to old turnstiles in the Kyiv subway
16:45
NATO officially names Russia the main threat to its security
15:44
Video: Russia did not strike Amstor shopping centre in Kremenchuk
15:05
German Chancellor Scholz grins to question of security guarantees for Ukraine
13:46
Russia tells UN for how long special operation in Ukraine will last
20:00
USA bans Russian gold
19:56
USA sanctions Russian defence officials and TV presenter
18:00
Poland: 'Enemy' is too beautiful a word, but we should not call Russia so
Americas
USA unveils plan for post-Putin Russia to collapse into smaller states