America and Britain destroyed Iraq for them, lynched the country's President for them, created five million orphans, five million displaced, over a million widows and now upper figures of over one and a half million dead for them. They created mass graves on an industrial scale for them, with people's beloveds buried in car parks, gardens, patios and football pitches - but now they are in the hands of ISIS (the self proclaimed Islamic State of Iraq and Syria) they pose barely a "minimal risk" say US government spokespeople. We are talking of course, chemical weapons. 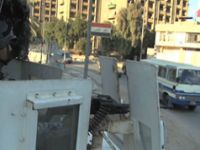 The currently sanguine view of the US government is in stark contrast to that of the New York based Soufan Group, a security and political risk consultancy with worldwide offices and operations, stretching from London, the Middle East, Asia, Africa, the Americas and Singapore. For them: "ISIS has become indisputably the most effective and ruthless terrorist organization in the world." (1)

On 11th and 12th June, ISIS gained control of the Al Muthanna former chemical weapons complex where, in the 1980s Iraq developed weapons believed to be on par with, then, the US and the former Soviet Union. Iraqi scientists reportedly travelled to the US and UK in order to gain the relevant expertise in chemical munitions (2.)

The vast Al Muthanna compound, covering many acres, was bombed and much destroyed by the "coalition" in the 1991 Gulf War, hardly the most intelligent target to hit, releasing untold life-threatening chemicals on the population, fauna, flora. But of course, then as now, as General Taguba was informed during his investigation in to the terrorist activities towards prisoners at Abu Ghraib prison by US personnel: "They were only Iraqis."

However, according to a CIA Report last updated in 2007 (3) there seems every reason to be exceedingly alarmed about the capture of Al Muthanna. Of the facilities which survived the attack were a number of bunkers for storage of the most dangerous materials. In 1994 in was found that: "Two sealed cruciform bunkers containing the largest declared stockpile of chemical munitions, old bulk chemical agent, and hazardous material associated with the CW program remained. The surrounding area at the facility became a refuse area or junkyard for relics of Iraq's past CW weapons program."

The weapons inspectors': "exploitations indicate that the storage area still remains a threat despite testing. Chemical storage containers filled with unknown hazardous chemicals are showing signs of rusting-through and leaking.

"Key bunkers and facilities are currently scheduled to be sealed or resealed.

"Stockpiles of chemical munitions are still stored there. The most dangerous ones have been declared to the UN and are sealed in bunkers. Although declared, the bunkers contents have yet to be confirmed. These areas of the compound pose a hazard to civilians and potential black-marketers."

Further: "The contents of two of the cruciform bunkers bombed during Desert Storm showed severe damage. Due to the hazards associated with this location, the UN decided to seal the bunkers.

"UNSCOM (the weapons inspectors) viewed the contents of the two bunkers; however an accurate inventory was not possible due to the hazards associated with that environment." Thus, there is neither a full inventory of the potentially most lethal of materials and they were simply sealed in and left.

Bunkers, of course, can be unsealed.

The Guardian (4) records that:

"The last major Report by UN inspectors on the status of Iraq's weapons of mass destruction programme was released about a year after the experts left in March 2003. It states that bunker 13 contained 2,500 sarin-filled 122mm chemical rockets produced and filled before 1991, and about 180 tonnes of sodium cyanide, a very toxic chemical and a precursor for the warfare agent tabun."

Whilst the tabun-filled containers were all treated with decontamination solution and "unlikely" to contain any agent (no certainties) "the residue of this decontamination would contain cyanides, which would still be a hazard". Understatement or what?

US State Department spokeswoman, Jen Psaki, whilst concerned about seizure of the complex, sunnily dismissed what to most would be a pretty alarming inventory as "degraded chemical remnants ... (which) "don't include intact chemical weapons and would be difficult, if not impossible to safely use ... or ... move." The US Defence Department sang from exactly the same hymn sheet.

So lethal chemicals are used "safely" and "difficulty" (not inability) with moving are air brushed.  They could surely be incorporated in to crude chemical devices. Ms Psaki's blithe assessment is more than strange, especially given that insurgents in Syria have near certainly used, with devastating effect, home made chemical weapons.

The "no immediate danger" message seems obliquely contradicted by Iraq's Ambassador to the UN Mohammed Ali Al Hakim who, in a letter to the UN said Iraq was unable to fulfill its obligations to destroy the weapons in the light of the takeover of Al Muthanna, but would resume its obligations when the facility was retaken and security restored.

Question one: If they are so "degraded" why the need to destroy them?

Question two: Why is Iraq being treated differently from Syria, which was forced to remove chemical weapons in highly dangerous circumstances, yet the UN (and that devious "international community") allows Iraq off the hook?

Should all that be a bit confusing, try this. On 8th July Ambassador Al Hakim informed the UN Atomic Energy Agency (UNAEA) that "terrorist groups" had seized nearly forty kilos (eighty eight pounds) of uranium from a laboratory at Mosul University (5.)

The Ambassador appealed for help: "to stave off the threat of their use by terrorists in Iraq or abroad" stating that the material: "can be used in manufacturing weapons of mass destruction." This as government spokesperson in the US and UK issue siren warnings of knowledge of those plotting dire attacks on both countries.

Geniality rules. No problem says the UNAEA: " ... we believe the material involved is low grade and would not present a significant safety, security or nuclear proliferation risk." Uranium is radioactive and uranium 233 through to 238 (there are six known isotopes) have a half-life ranging between sixty nine and 4.5 Billion years.

It is hard to know whether to laugh or cry, given the horrors rained on Iraq, at the now relaxed attitude to allegedly having potentially lethal chemicals and chemically toxic and radioactive materials in the hands of those who have committed unspeakable crimes and declared a fundamentalist "Caliphate" between Iraq and Syria.

Remember just one of the litany of lies to justify the Iraq invasion, the October 2002 ninety page National Intelligence Estimate document produced by Washington which stated that Iraq had begun "vigorously trying to procure" uranium from Niger and two other African countries?

In January 2003, then President George W. Bush even stated in his State of the Union speech: "The British government has learned that Saddam Hussein recently sought significant quantities of uranium from Africa." More baseless rubbish from now "Peace Envoy" Tony Blair and his cabal. But now, apparently, uranium in the hands of unknown terrorists is of no consequence.

At the same time, then US Defence Secretary Donald Rumsfeld was bitterly condemning Saddam Hussein as a "brutal and ruthless monster ... citing the use of the very weapons he (Rumsfeld) helped to supply."

"As an envoy from President Reagan (in 1983) he had a secret meeting with" Saddam Hussein "and arranged enormous military assistance for his war with Iran."

"Mr Rumsfeld, at the time a successful executive in the pharmaceutical industry, still made it possible for Saddam to buy supplies from American firms." (6)

Given the litany of lies attached to the tragedy of Iraq, can we believe the apparently tranquil view being taken of these latest developments? Or will it suddenly become an excuse to reinvade to rescue US puppet "Prime Minister" Nouri Al Maliki, or even an pretext for his to use even more heinous weapons on those who oppose him than he has already and blame the complex coalition - temporary "marriage of convenience" - of resistance and insurgents. There are many unanswered questions in this alarming saga.