Iraq: Has the US-UK War for Oil Detonated the "New Iraq"??

What a black, tragic irony. Just two months ago, on the eleventh anniversary of the (illegal) invasion of Iraq, the Guardian (1) reminded that the mass slaughter, the incineration of swathes of towns, cities and the use of US-UK weapons of mass destruction was not about Iraq's weapons of mass destruction, but about oil (a fact long established for any one with even minimal gray matter.) 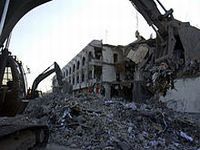 Today flames are rising from Iraqis largest oil refinery at Baiji, 130 miles north of Baghdad, the result of mortar attacks by the varying forces sweeping towards the capitol city.

The Guardian outlined, the invasion's: "real goal - as Greg Muttitt documented in his book 'Fuel on the Fire', citing declassified Foreign Office files ... was stabilising global energy supplies (especially) ensuring the free flow of Iraqi oil to world markets" with advantage to US and UK companies.

"The most important strategic interest lay in expanding global energy supplies, through foreign investment, in some of the world's largest oil reserves - in particular Iraq."

The documents showed that the US and UK sought to privatise Iraq's oil production and carve it up amongst favored investors.

Further, according to the Independent (2): In March 2003, just before Britain went to war, Shell denounced reports that it had held talks with Downing Street about Iraqi oil as "highly inaccurate". BP denied that it had any "strategic interest" in Iraq, while Tony Blair described "the oil conspiracy theory" as "the most absurd."

As ever, it seems Tony Blair had tossed truth under a bus. In October and November 2002, documents came to light showing that then, just months before the invasion: "Baroness Symons, then the Trade Minister, told BP that the Government believed British energy firms should be given a share of Iraq's enormous oil and gas reserves as a reward for Tony Blair's military commitment to US plans for regime change."

Further: "Lady Symons agreed to lobby the Bush administration on BP's behalf because the oil giant feared it was being "locked out" of deals that Washington was quietly striking with US, French and Russian governments and their energy firms.

"Minutes of a meeting with BP, Shell and BG (formerly British Gas) on 31 October 2002 read: 'Baroness Symons agreed that it would be difficult to justify British companies losing out in Iraq in that way if the UK had itself been a conspicuous supporter of the US government throughout the crisis.' "

On 6 November 2002, the Foreign and Commonwealth Office invited BP for a chat to discuss opportunities in Iraq "post regime change". Minutes of the meeting record: "Iraq is the big oil prospect. BP is desperate to get in there and anxious that political deals should not deny them the opportunity."

The previous month the Foreign Office's then Middle East Director, Edward Chaplin, noted: "Shell and BP could not afford not to have a stake in (Iraq) ... We were determined to get a fair slice of the action for UK companies in a post-Saddam Iraq." BP representatives told the Foreign Office that Iraq was: "more important than anything we've seen for a long time".

Moreover, Greg Muttit's book revealed that: "The 20-year contracts signed in the wake of the invasion were the largest in the history of the oil industry. They covered half of Iraq's reserves - 60 billion barrels of oil, bought up by companies such as BP and CNPC (China National Petroleum Company), whose joint consortium alone stands to make £403m ($658m) profit per year ..." (Emphasis mine.)

On 6th February 2003 Tony Blair stated: "Let me just deal with the oil thing because... the oil conspiracy theory is honestly one of the most absurd when you analyse it. The fact is that, if the oil that Iraq has were our concern, I mean we could probably cut a deal with Saddam tomorrow in relation to the oil. It's not the oil that is the issue, it is the weapons..."

However, overnight and this morning (Wednesday 18th June) it looks as if the plotting, illegal carve up and grand theft of Iraq's major resource might have come back to haunt them as the rebels sweeping the country  are widely reported to control much of Iraq's largest refinery. BP has evacuated twenty percent of staff so far from the southern oilfields although far from Baiji and Exxon Mobile has conducted a "major evacuation."

Foreign workers are reported to have been helicoptered out of Baiji, now seemingly near entirely under control of the rebels, who: "are in control of the production units, administration building and four watch towers. This is seventy five percent of the refinery." (3) The flames however, still rise over parts of this vast, volatile complex. As I write a report has just come in on a live feed to the Guardian from a government employee, Salah Majed, at Baiji who says the plant is on the verge of falling entirely to the rebels.(4)

Meanwhile, as the Iraqi "government" (most of them fled for the airport and anywhere not in Iraq over the weekend) so comprising near singularly of " Prime Minister" Nouri Al Maliki - who has not yet formed a parliament after the crooked elections of 30th April,  from which Anbar, the largest governorate in Iraq was excluded - has asked for US air intervention against the "rebels." So again, Iraq is to be potentially bombed in to "peace" for oil (See 4.) Illegal, genocidal, insanity.

Ironically, Baiji was eighty percent destroyed in the first Gulf war in 1991. In spite of the crippling US-UK driven UN embargo where no spare parts for anything were allowed, it was rebuilt in about two months.

Further ironically, Baiji was where British hostages captured in Kuwait were held during the first Gulf War. It may yet hold Iraq's US imposed puppet and the remnants of his regime hostage.

The complex sits in what the US occupiers simplistically called "the Sunni Triangle", largely supporters of the former secular Iraq, rather than the sectarian tragedy, the feckless open bordered disaster that the invasion sponsored.

Will it yet, between oil and nationalism, hold the key to Iraq's future and escape from those who came in and imposed murderous dictats and their despot on a "far away place of which (they) knew nothing"?