There are numerous casualties and fires in the city. They are bombarding both the industrial sector and the residential neighbourhoods. The population is in a state of panic - [to date,] Kramatorsk had not experienced such massive artillery shelling. 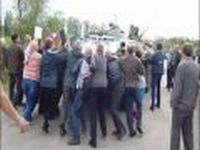 What is more, militia objects have been spared - the strikes are not against them. Why, you ask? The answer is elementary - in order to force tens of thousands of refugees to flood into Russia. Genocide and ethnic cleansing in their purest form.

I have decided to offer up to universal review a text from my personal correspondence (as appropriately amended). I ask that you distribute it. It is no longer possible to keep silent, hoping that someone "on the mainland" "comes to his senses."

As I have become accustomed to anticipate events several steps ahead, I am in a state of utter "prostration." The observable destruction of the economy and the population I anticipated even a month and a half ago, and, in order to avoid it, called then for a peacekeeping intervention.

It is now too late - peacekeepers will not be able to intervene without a battle. Now I am calling for the provision of IMMEDIATE AND WIDESCALE MILITARY ASSISTANCE. But no assistance has come.

In a week or two (and possibly earlier) a substantial part of the military detachments of DPR and LPR may be completely routed. The reason is the insurmountable ratio in heavy weaponry ...

And when Donetsk and Lugansk are completely blocked and surrounded, like Slavyansk, the following question will rear its head - either Russia will:

2)    completely abandon Novorossiya (a possibility [the Ukies] are dearly hoping for).

And I am not at all sure that this dilemma will be resolved via the first option. More likely than not, it will be the opposite.

We can burn down even a hundred APCs and kill even five thousand troops, but the overall balance of forces will hardly change. Well, for example, the [manpower] ratio will become 1 to 14 instead of 1 to 15 ...

Every day we are forced to relinquish another large settlement - we have neither the men nor the guns to defend them. At the same time, we have no ability to retake any of them - because we have nothing to match the Ukie's heavy weaponry. All we can do is engage them in defence more or less successfully.

So, what reason is there for optimism? From our own minor successes? They are purely tactical. And, meanwhile, we have long ago started losing the strategic engagement.

I see open sabotage in the approach taken by the Russian officials at the highest-level in relation to Novorossiya. It shows in everything. I dare say that [this sabotage] is fully conscious. Otherwise, there is no explanation for the fact that DPR and LPR have yet to be recognized even de facto and that they receive no supplies of such badly needed weapons and equipment.

Yes, Putin has effectively disavowed (and I wonder - at whose suggestion?) the pledges of standing ready to protect the Russian civilian population of Donbass. NO ALTERNATIVE WHATSOEVER HAS BEEN PROPOSED. If there is no military aid - the military defeat of DPR and LPR is inevitable.

Whether [this defeat] comes a week earlier or a month later does not matter. The enemy will cut us off from the border and will methodically suffocate us, "cleansing" the territory in the process and, in one go, forcing out into Russia a million or two of utterly deprived and embittered refugees (I trust the consequences for the economy and the social sphere are obvious).

And then, groups of "grateful oligarchs" will come to Putin with sorrowful faces and offer as their spokesperson the "great schemer" Surkov, who will explain, in a quiet and insinuating voice, that: "We did everything that we could, but these ... these good-for-nothing Donetsk bandits themselves failed it all themselves, and we can give them no help without risking nuclear war ... They punished themselves ... It is not worth it to take a risk ... We need to persevere ... We will make everything right in time ... It is possible to negotiate with Poroshenko ... This is a tactical retreat ... We are not ready to go to war ... After all, we took Crimea, didn't we? ..." and so on and suchlike.

What this will mean for our company - I know already. Most of us will perish, but that is not the issue - this uprising and all the victims will be in vain, and the "Russian Spring" will be eliminated at the root by the "Ukrainian Freeze."

And the next war, the war that we will not witness, will be on Russia's territory - right after the "Moscow Maidan," of course ...