Jean-Claude Juncker and his EU: Russophobic, intrusive and arrogant

Russophobic, intrusive and arrogant. These three adjectives sum up the childish diatribe entitled Ukrainian Lessons, published in several European media outlets this week, a study in sheer bilge, lies and pig-faced ignorance. Welcome to the European Union, where hypocrisy rules supreme and democracy is a joke. 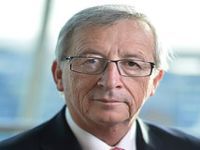 Before we start, how many of the European Union's citizens actually voted for the model that has been imposed in an arrogant, holier-than-thou, top-down approach? And what does the EU do when a Referendum does not go the way the Eurocrats in Brussels and Strasbourg planned? Why, they perform a cynical manipulation of the text and repeat the vote ad nauseam until the "NO's" give up. So much for democracy.

Rumour has it that Jean-Claude Juncker has already been appointed for high position by Angela Merkel, before the European Union elections take place this weekend, but hey! nobody gets a say in EU policy anyway since the only legislative body elected directly (the European Parliament) has limited powers. So much for democracy.

And this brings us to the Russophobic, puerile, shallow, intrusive, arrogant, jingoistic and xenophobic diatribe penned by this ex-Prime Minister of Luxemburg (why is it that failed politicians all gravitate to EU sinecures?), a nonsensical piece of drivel entitled "Ukrainian Lessons".

Rather than focus on the truth, this ex-Prime Minister takes the opportunity to refer to "the illegal annexation of... Crimea by Russia" and insinuates that Russia is the evil influence behind the unrest. He then goes into a self-righteous squeak about how noble Europe is, how well-meaning and how important it is to have a (violins) free and fair election in Ukraine (drum roll) on May 25, the same day a tiny fraction of the EU electorate will turn out, a growing number of whom will register their total discontent with the Union imposed upon them without the courtesy of an election. SO if nobody asked them whether they wanted the EU or the Euro, why should they vote?

Not a word does this Russophobic guttersnipe of an article speak about the Fascist Putsch in Kiev, which illegally ousted a democratically elected President (Yanukovich). So much for democracy. Not a word about the edicts issued by this Fascist Junta against Russia, Russian and Russians, not a word about the fact that the shooting incidents in Independence Square were coming from the Fascists, firing against the police and against the anti-Yanukovich demonstrators to create a cause.

May Jean-Claude Juncker hear their screams as they were doused in gasoline and set fire to by Ukrainian Fascist PIGS, the same side that he and his European Union support and call democrats and claim they have the right to stage a democratic election. How, if they themselves seized power illegally? May Jean-Claude Juncker be haunted by the terrified look in the faces of defenceless civilians, old men and women included, as they were murdered by Fascists, sent by the Fascist Junta that seized power in Kiev and which the European Union supports. So much for democracy.

And speaking about elections, what about the democratic election, which was free and fair, in Crimea? And what about Crimea's right to hold such an election given that the Government of Ukraine had been removed illegally? In that case, under the law, the governing body of Crimea is its Assembly, which was the organism organizing the Referendum? Is Jean-Claude Juncker so stupid he does not even bother to research the law before making a prize ass of himself in public? And this is the figure Angela Merkel has chosen (before the election) to rule the roost in Europe? Figures...

Where was Juncker and where was Europe when Qatar and Saudi Arabia and eternal American bed-boy Turkey were used to arm thousands of Salafist Ismalist fanatics in Syria, who sliced the breasts off women in the street? Where was Juncker, where was the European Union as false flag events using chemical weaponry were perpetrated by western-backed terrorists in Syria to place the blame on President Assad, who by the way according to even NATO sources garners some 70 per cent of support inside Syria? So much for democracy.

Where was Europe and its wonderful Union when Georgia was instigated into attacking Russia, complete with its US mercenaries, which were heard giving orders as the Georgian/NATO scum ran screaming from the Spetsnaz? Why supporting Saakashvili, of course.

So what is this, Mr. Juncker, about "the EU always tries to maintain friendly relations with Russia"? Let us be honest. The European Union is an abortion on a continental and pluri-national level, nobody wants it, nobody likes it; it was imposed top-down within a few decades when all people wanted was a loose trading agreement like EFTA. Nobody wanted Brussels to give directives, nobody wanted the Euro, nobody wanted Convergence Rates imposed upon economies which took 5,000 years to develop. Nobody asked for the Euro Experiment, imposed without even bothering to calculate the consequences in case of failure.

The European Union is a motley collection of back-stabbing, wannabe Hitlers and Napoleons, always was, is and always will be. The one that stopped Hitler was MOSCOW, not France, Belgium and Luxemburg who rolled over and bared their bottoms, as usual. The European Union is an abomination, a home for failed politicians who have done nothing other than create several echelons of jobs for the boys and girls, wasting countless billions of dollars of the European citizens' hard-earned cash on stupid decisions and illegal actions, such as making fishing agreements with Morocco over fish taken from waters belonging to Western Sahara.

The European Union has destroyed the livelihoods of millions by closing fisheries, industries and agriculture, paying farmers to sit on their backsides, destroying millions or billions of tonnes of food, slaughtering animals, burying crops and fruit, destroying jobs and futures.

The result? Endemic unemployment, super-rich corporations taxing the citizens more and more in return for less and less, making ever-growing fat profits year after year, increasing energy prices, saying they cannot afford to provide the service without the price hikes and then saying they made a profit of hundreds of millions of dollars.

The European Union is an anachronistic, stinking and fetid abortion which died two thousand years ago with the Roman legion and the denarius. The only good thing about it is the word "exit" written on the frontiers of the countries which form its buffer zones.

The European Union is another Titanic. It was hastily constructed, it is recklessly managed, it is ill-prepared for the seas in which it sails and impotent to navigate around the icebergs in its way. However, like all failed leaders, captains like Jean-Claude Junker will flee and save their own skins rather than go down with the sinking ship.

Ah! And the result of your pathetic sanctions? A half-trillion-USD deal between Russia and China. Nice one. Sterling job there, Mr. Juncker...