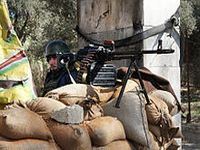 There is no doubt that incumbent President Bashar al Assad remains hot favourite for Syria's June 3 elections. Even NATO's advisers put his support at around 70%. However the country's first competitive presidential elections in recent times threatens to add a 'normality' to Syria's previously one party system, a normality the western powers are desperate to avoid.

Hence Washington's decision to deliver new weapons systems (like anti-tank missiles) to the al Qaeda-style 'rebel' groups, even when it has become clear that the Government and national army are prevailing in most parts of the country.

Let's be clear about these elections, it is not some simple political choice to hold them at this time. They are required by Syria's constitution, before the end of President Bashar's term in July. To ignore this requirement, to suspend the constitution, would have deepened rather than help resolve the crisis.

Of course, a major test will be voter turn-out. Prospects for participation have improved strongly with the recent elimination of armed groups from Homs, Syria's third largest city. A turn-out rate that exceeded that of 2012 would be a good sign for Syria's democratic process.

Turnout in the 2012 Assembly and constitutional reform votes was estimated at a little over 51%; not high, but higher than the 2010 US Congressional elections participation rate of 41.6%. Remember, at that time, the Muslim Brotherhood-backed 'Free Syrian Army' was threatening and delivering death to those who participated in the voting.

No doubt the FSA's al Qaeda-style successors are making the same threats now. But Syria's army has backed them into a few corners. The last thing these sectarian fanatics want is any sort of democracy.

It is precisely because of the constitutional changes in 2012 that Syrian voters now have presidential choices, apart from the incumbent. The other candidates are Maher Hajjar, an independent communist from Aleppo, and businessman Hassan al-Nouri.

All three candidates have accepted a set of 'national principles' which include support for the Syrian Arab Army as 'the protector of Syria against any foreign aggression and internal sabotage'. There is no Washington or Paris-backed candidate calling for an Islamic state; such sectarianism remains banned under the constitution.

However neither Hajjar nor al-Nouri can be dismissed as simple patsies for President Bashar.  Under current rules each had to secure the support of at least 35 MPs in the current 200+ parliament; and MPs can only back one candidate. That means there is substantial electoral support for the two non-Ba'ath Party candidates, albeit support for those who back a 'secular' or pluralist nation.

Getting over the 35-MP hurdle, the new candidates still face the fact that President Bashar counts not only on the backing of the 60% of MPs who belong to the Ba'ath Party. The Syrian Social National Party (SSNP) and the Communist Party have also thrown their weight behind him. Bashar is increasingly seen as a symbol of resistance and national unity, and essential to winning the war.

In actual policy terms some more conventional themes have emerged. Hajjar, as the left candidate, remains a pan-Arabist and backs redistributive policies alongside huge capital works, to address unemployment. He also aims to attack corruption, probably the key complaint of the wider reform movement in recent years.

For his part, Al-Nouri, as the right-wing candidate, stresses a type of 'modernization' called the 'smart free economy', with emphasis on public-private partnerships. Indeed many of the major investments in Syria in recent years, like the large tourist hotels, have been joint venture operations. The small business sector, of course, is extensive.

As a candidate, Bashar al Assad sits at the centre left of this new configuration. His government has maintained free health and education, throughout economic hard times and war and, if anything, the conflict has deepened Bashar's commitment to state investment. He was always seen as a reformer and moderniser but now, importantly, he is seen as a 'rock' which has successfully defended Syria against the western-backed sectarian Islamists. That is what will clinch the vote for him. He seems likely to get a higher vote than his Ba'ath party colleagues did in the Assembly elections of 2012.

By failing to engage with the reform process at the Geneva 2 talks in January (when there still existed the possibility of constitutional change) the exiled, Muslim Brotherhood-led 'opposition' have effectively shot themselves in the collective foot.

Rather like the pro-coup opposition in Venezuela, ten years ago, they rejected 'normal' politics in the hope that backing from the big powers would deliver them government by violence and deception. They rejected dialogue and reform for attacks on schools, hospitals, and ordinary people, blaming the government for their own sectarian massacres. That strategy backfired and they have now excluded themselves from Syrian political life for many years.

Syria's democratic reform process is advancing, despite the ongoing terrorist war, and it threatens to derail the western 'regime change' agenda. The al Qaeda-style groups have served to unite the reform movement with pro-government forces. For these reasons, Syria's June 3 vote will be a patriotic election.