Thursday 15th May marked Nakba Day, Yawm an-Nakba, "Day of Catastrophe", the onset of the displacement of perhaps 800,000 Palestinians, at the time 67% of the population, followed by the destruction of over five hundred villages (1) since the establishment of the State of Israel in 1948, under the commitment agreed by the then British Foreign Secretary, Lord Arthur Balfour, in November 1917. 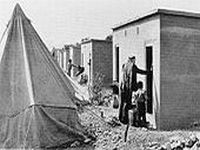 This week: "Figures released by the Ramallah-based Central Bureau of Statistics ... put the number of registered Palestinian refugees at 5.3 million. Those refugees live in 58 United Nations-run camps in Syria, Lebanon, Jordan, the West Bank and Gaza Strip."(2) Tragedy on a scale near unimaginable - ongoing.

Hardly the day to plan another one. However, undaunted, Britain's current Foreign Secretary, William Hague ("I have been a Conservative Friend of Israel since I was sixteen") hosted a meeting of the "Friends of Syria" group (Egypt, France, Germany, Italy, Jordan, Qatar, Saudi Arabia, Turkey, the United Arab Emirates, the UK and the US) to continue plotting to further decimate another Middle East country and overthrow yet another sovereign head of State. As increasingly chilling, verified images appear of "opposition" - read insurgent - atrocities in Syria: beheadings, behandings, crucifixions, summary executions and of course cannibalism, Hague announced that: "the Syrian opposition would have its diplomatic status in the UK upgraded", according to the BBC.

The Foreign Secretary was clearly following in his master's footsteps since last week the Obama regime granted diplomatic foreign mission status to the "Syrian National Coalition" offices in New York and Washington, with a welcome present of a further promised $27 million increase in "non-lethal assistance to rebels fighting to oust President Bashar al-Assad."(3) This brings the total US support for the above crimes to $287 million. Strangely, two days before the London meeting, it was announced that Israel's Justice Minister Tzipi Livni was awarded  "special mission" temporary diplomatic status to visit London, "to protect her against arrest and potential prosecution for alleged breaches of international law, including war crimes" relating to Israel's attack on Gaza in December 2008-January 2009. In December 2009 Livni cancelled a visit to Britain after an arrest warrant was issued by a London Court.

"The British government subsequently changed the law on universal jurisdiction ... in connection with international war crimes ... Previously, citizens could apply directly to a Judge for an arrest warrant." Currently, London lawyers Hickman Rose working with Gaza's Palestinian Centre for Human Rights (PCHR) had again been seeking a warrant for Livni's arrest, Hickman Rose requesting that the Crown Prosecution Service advise the police to apprehend her: "for suspected war crimes and to liaise with the Attorney General to approve criminal charges." PCHR Director Raja Sourani commented of the Foreign Office's stunt: "As  lawyers for the victims of widespread suspected Israeli war crimes, PCHR is very concerned that these kind of political acts endorse the 'rule of the jungle' rather than the 'rule of law.' " Indeed. The Foreign Office is remarkably selective when it comes to alleged war criminals. Livni's visit met: "all the essential elements for a special mission, and for avoidance of any doubt on the matter, the Foreign and Commonwealth Office has confirmed consent to the visit as a special mission", they commented.(4)

The reason for Livni's visit was shrouded in secrecy. What is known that the evening of the "Friends of Syria" meeting, she was to address a fund- raising dinner for the Jewish National Fund at London's luxury Jumeirah Carlton Tower Hotel ($725 a night current lowest available rate, no wonder funds are needed.) But all those Foreign Office diplomatic sleights of hand to enable something she could have done by video-link? Well, here's a thought. Two days before Ms Livni's arrival in London aided by the Foreign Office's diplomatic goal post displacements, Major General Amos Yadlin, former Deputy Commander of the Israeli Air Force, who headed military intelligence between 2006-2010 said that: " Israel should weigh launching a military strike at Syria if the Assad regime uses chemical weapons against his civilian population ..." Preferable though, mooted the General, would be a NATO led action led by the US, with Turkey the key country, establishing a no fly zone over Syria "at the very minimum."(5) Libya revisited.

There should also be "standoff strikes" by NATO aircraft at strategic government targets. "If Israel discovers that Assad is using chemical weapons against his people in mass attacks, it should intervene militarily", said the representative of a regime who has used chemical weapons - not alone white phosphorous but also depleted uranium, both a chemical and radioactive weapon - against the Palestinians. Ironically, the article is headed: "Israel should punish Assad for killing civilians", an expertise Israel has honed with impunity over sixty six years. Right on cue, on 13th May, in the lead to the London Conference, Human Rights Watch produced a Report of "strong evidence" that Syrian government forces were using chlorine bombs.

(6) Coincidentally, the previous day a letter had been sent to Kenneth Roth, Executive Director of Human Rights Watch, querying the organization's seemingly extraordinarily partisan relationship with the US government. See: "Nobel Peace Laureates to Human Rights Watch: Close Your Revolving Door to U.S. Government."(7) A flavour of the content is at para two: "For example, HRW's Washington advocacy director, Tom Malinowski, previously served as a special assistant to President Bill Clinton and as a speechwriter to Secretary of State Madeleine Albright. In 2013, he left HRW after being nominated as Assistant Secretary of State for Democracy, Human Rights & Labor under John Kerry."

The letter was also signed by former UN Assistant Secretary General, Hans von Sponeck, current UN Special Rapporteur on Human Rights in the Palestinian Territories, Richard Falk and over one hundred scholars  John Kerry was, of course, also in London for the meeting, two days after he and President Obama had met with alleged former brothel owner Ahmed al-Jabra, who heads the "Syrian National Coalition", in Washington. Jabra too had hopped on a 'plane to London to attend the up-market plotting venue.

A world away from the prison cell in Syria where he allegedly spent time for drug dealing. Al-Akhbar has written regarding Ahmed al-Jabra of security records showing him:  "as a fugitive wanted for criminal offenses, including fraud, corruption, and even assassination plots that were not carried out. According to the source, records show that Riyadh handed over 'the suspect Ahmad al-Jarba' to Damascus in 2008, on charges of drug trafficking, in accordance with an extradition agreement between Saudi and Syrian security services ... Jarba was tried and sentenced to a prison term at the time."(8)

Moreover: " ... another entry involving Jarba, which the Qatari security services undoubtedly also have in their records. After the coup staged by the outgoing Emir of Qatar Hamad against his father Khalifa al-Thani, the latter's Foreign Minister fled to Syria, where he became a vocal supporter for restoring the previous Emir. At the time, according to the records, Emir Hamad's people asked Ahmad al-Jarba to assassinate the exiled Qatari Foreign Minister ...  Al-Jarba even received payment after accepting to carry out the mission, the source claimed." See also: "The Criminal Record of the Head of the Syrian National Coalition." (9)

Perhaps these most serious allegations regarding the man who now has upgraded diplomatic status in the US and UK have passed the State Department and Whitehall by. Whatever, they certainly seem to play fast and loose with awarding diplomatic credentials.

In context, if the real reason for the action over Justice Minister Livni's status change was not so she could attend the plotting against Syria - just over three weeks before the Syrian Presidential election on 3rd June, which President Assad is widely expected to win - it would be beyond astonishing.  Incidentally, at the Jewish National Fund cash making bash, Livni told an illuminating tale: "Recalling her family history, the minister also jokingly confided to the audience that as Justice Minister it was 'embarrassing that my parents met while they were robbing a British money train to buy weapons to fight against the British army.'

"Ms Livni told her audience: 'The first thing I want to emphasise is my parents were freedom fighters and not terrorists. I am not willing to accept any comparison with terrorists like Hamas who are looking for civilians to kill.' "(10) Clearly this was a week of triumph for selective perception. Meanwhile, double standards at all levels are the order of the days. Obama, Kerry and Hague repeat the same words: "(President) Assad has no place in Syria's future" (will any one ever ask what business it is if theirs?) Syria's election has been declared a "farce", but that of the US imposed fascist Junta in Ukraine on 25th May is regarded by as a: "vote crucial to finding a way out of the crisis and preventing the country from tearing apart further ..."

"The US and its allies are working 'to send a unified message to pro-Russian separatists ...' " that interference will not be tolerated. (11) Whilst in sovereign Syria they are giving ever escalating $millions and arms to up to eighty groups of foreign terrorists led by an alleged serial criminal to bloodily interfere at mass murderous level. In all there is only one consistency: illegal interference in nation states and barely believable levels double standards. Incidentally Mr al-Jarba refers to the coming "new Syria." For anyone looking at the ruins of the US' "new Iraq" and "new Libya", that should be enough to send all banging on government doors, emailing, telephoning, demonstrating: "Never, ever again."