"It is forbidden to kill; therefore all murderers are punished unless they kill in large numbers and to the sound of trumpets." (Voltaire, 1694-1778.) 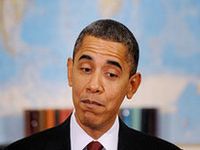 It is impossible not to gain the impression that the criteria for being awarded prestigious honors for services to "peace", "humanity" or "distinguished public service" is a candidate who is duplicitous, vicious, stone hearted and above all prepared to kill, plan killings or rejoice in killing on an industrial scale as brutally as can be devised. (Not Satire.)

Moments after being informed of the horrific death of Libyan Leader Colonel Muammar Quaddafi in October 2011, then Secretary of state Hillary Clinton said "Wow!" then unforgettably and chillingly laughed telling a television crew: "We came, we saw, he died." Asked if her recent visit to Libya might have had anything to do with his death, she: "... rolled her eyes" and said: "I'm sure it did."(1) Six months later, in April 2012, Clinton received the Woodrow Wilson Award for Public Service. The following month she received the Champions for Change Award for Leadership and in May 2013, the inaugural Warren Christopher Public Service Award. Madeleine Albright's comment, when US Ambassador to the UN, on "60 Minutes" (12th May 1996) that the price of the lives of half a million children who had died as a result of US-driven UN sanctions on Iraq, was: "a hard choice, but the price, we think the price is worth it", was no bar to her receiving, under two years later, the 1998 International Rescue Committee's Freedom Award:  "For extraordinary contributions to the cause of ...  human freedom ... The list of those who have received the Freedom Award reveals the remarkable ability of an individual to shape history and change for the better a world moving toward freedom for all."

The "freedom of the grave" comes to mind. Other recipients have been John McCain (2001) George H.W. Bush whose regime vowed to "reduce Iraq to a pre-industrial age" - and did, in 1991 - and Bill Clinton whose Presidency (1993-2001) in addition to several massive bombings and unending daily ones (all illegal) oversaw, manipulated and pressured the UN to continue to implement the most draconian embargo in the organization's history and ensure that children, the sick, went on dying in ever greater numbers every year of his Presidency.

They were both honored in 2005. In 2008 the Award went to Kofi Annan, during whose tenure as UN Secretary General (!997 - 2006) involved Iraq's tragedy and "thirty four major armed conflicts."(2) Annan was entrusted with oversight of international commitment to the UN's fine founding pledge by: "We the peoples of the United Nations determined to save succeeding generations from the scourge of war ... to reaffirm faith in fundamental human rights, in the dignity and worth of the human person ..." In the event he merely bleated mildly from time to time that some humanitarian holocaust was: "regrettable", "unfortunate" or that he was "concerned." Moreover, Kofi Annan's son, Kojo, had profited from the pitiful UN-Iraq "Oil for Food" deal as children were dying, with former US Federal Reserve Chairman, Paul Volcker saying, on behalf of a Committee set up to investigate: "Our assignment has been to look for mis- or mal-administration in the oil-for-food programme, and for evidence of corruption within the U.N. organization and by contractors. Unhappily, we found both."(3)

These are minimal examples of how political pigs ears become polished silk purses. Now President Obama who, as Sherwood Ross has written: "has already bombed six countries (Libya, Yemen, Somalia, Pakistan, Afghanistan, and Iraq) is risking a possible escalation of the Ukraine crisis he nurtured, into World War III against Russia", was, on 7th May, awarded the 2014 Ambassador for Humanity Award by the Shoah Foundation. The Shoah Foundation was established by Steven Spielberg to document the Holocaust, but has since expanded to document other modern genocides. Their new Ambassador's actions should keep them occupied for a good while. "President Obama's commitment to democracy and human rights has long been felt", Spielberg said in a statement.

"As a constitutional scholar and as President, his interest in expanding justice and opportunity and all is remarkably evident." The timing of the Award may outdo even the other more farcical honors, since, as Ross points out, according to Russian expert, Professor Francis Boyle of the University of Illinois:  "Obama now has broken the promise President George H.W. Bush gave to Soviet President Mikhail Gorbachev that if he agreed to the reunification of Germany, NATO would move no farther east, toward Russia's boundaries.  The Obama administration and NATO are maneuvering humanity into a reverse Cuban Missile Crisis right on the borders of Russia. Can World War III be far behind?" Further, NATO is planning larger number of combat forces in Eastern Europe, thus: "the dreaded Cold War, with all its staggering cost, with all its immeasurable weight of fear, begins again." (4) But even the first year of the Obama Presidency marked a year zero for many. In 2009 at least seven hundred Pakistani civilians were obliterated in drone strikes.

(5) Those also killed, accused of terrorism, had no trial, no lawyer, no right of reply. They were simply executed under the US Commander in Chief's personal policy. According to the Bureau of Investigative Journalism (6) to January this year: "Since Obama's inauguration in 2009, the CIA has launched 330 strikes on Pakistan - his predecessor, President George Bush, conducted 51 strikes in four years. And in Yemen, Obama has opened a new front in the secret drone war." Further: "Across Pakistan, Yemen and Somalia, the Obama administration has launched more than 390 drone strikes (since 23rd January 2009) eight times as many as were launched in the entire Bush presidency.

These strikes have killed more than 2,400 people ..." In Yemen, under US drones: "Last year saw the highest civilian casualty rate since Obama first hit the country in 2009." It is not alone drones. For example, a week to the day after Barack Obama was awarded the Nobel Peace Prize: "On December 17 2009, a US Navy submarine launched a cluster bomb-laden cruise missile at a suspected militant camp in al Majala, southern Yemen.

The missile hit a hamlet inhabited by: " one of the poorest tribes in Yemen. Shrapnel and fire left at least forty one civilians dead, including at least twenty one children and twelve women - five of whom were pregnant." In his Nobel acceptance speech he defended the use of force as: "not only necessary, but morally justified." A constitutional lawyer who has. figuratively, burned his law books.  But the President started as he continues.

Three days after becoming Ambassador for Humanity, the US announced a "pilot programme" which is sending anti-tank weapons to terrorists in Syria. Lest it be forgotten, these groups have been videoing themselves crucifying, beheading, removing and eating the organs of victims, chopping off hands and dragging people behind moving vehicles. Under the Commander in Chief aka Ambassador for Humanity, the "pilot project" is an experiment trying to establish whether the weapons will "fall in to the wrong hands." Nauseatingly farcical.

Gulag Guantanamo is still open with the untried, condemned to incarceration until time unknown and legally unaccounted for, another pre 2009 election pledge condemned to the trash bin of history.. Iraq's citizens continue to be bombed with US missiles, under the US proxy Prime Minister. At home, under this Presidency, the US has the highest first day of life infant mortality rate in the industrialized world, a survey released this week has found. (8) The US is in the top five countries with the world's highest execution rates.(9)

In 2011 Pew Research found that: "the median black household had about seven per cent of the wealth of its white counterpart, down from nine per cent in 1984, when a Census survey first began tracking this sort of data."(10) "Change we can believe in?" It has to be wondered whether President Obama pondered on this as he headed to California and his Award ceremony in Air Force One, costing $228,288 per hour.(11)

The prison population of America, at 2.4 million (2013 figures) is just the top of the iceberg, including: "around three thousand children locked up for things that aren't crimes for adults, 'such as running away, truancy and incorrigibility.' "  See woeful details (12.) As this is finished news comes in of: "Obama left alone as agents moonlight" Shock, horror. Who protects the villagers of Pakistan, Afghanistan, Yemen, Somalia from the Ambassador for Humanity's drones?  Perhaps the Nobel Committee could lead the way in ending these outrageous Awards by rescinding a few of their own. It would be a start