The impotence of the UNO as a peacekeeper

Lakhdar Brahimi resigns as UN-Arab League Special Envoy on the Syria crisis, unable to make any headway in a situation fomented by the west and its lackeys in the Middle East, namely Saudi Arabia and Qatar, intent on arming terrorist forces to act as proxies in their intrusive and illegal policies. RIP, UNO. 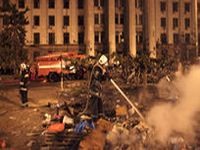 The United Nations Organization, as a peacekeeper, is dead, a romantic anachronism in a world which descends more and more into the law of the jungle, where might is right, where bullying, blackmail and belligerence are the kinetic forces driving policy, not discussion, debate and dialogue, not diplomacy.

Diplomacy died when the Soviet Union dissolved as NATO had to invent wars to justify its existence as the cutting-edge of the business lobbies which control the governments of Washington and its NATO poodles in Europe. The death-knell tolled for the United Nations Organization in the Balkans Wars in the 1990s and by Iraq in 2003, it was obvious that as a peacekeeper, the UNO was a spent force.

All the covenants, treaties and agreements signed between Westphalia in 1648 and the Helsinki Final Act in 1975 regarding the sovereignty of borders and the inviolability of national frontiers were destroyed when the United States of America, poodle-in-chief the United Kingdom and a handful of sickening sycophants panting for scraps and morsels invaded the Republic of Iraq, outside the auspices of the United Nations Organization's Security Council.

Following Iraq, what had now become the FUKUS Axis (France, UK, US), the arrowhead of NATO, had already discovered how to circumvent the UNSC by rushing policy through, promising "to fill in the details later" if Russia and China gave their nod and trusted them on this one. And what happened?

A no-fly zone supposedly imposed to protect civilians acted as an umbrella for special forces operations when boots were indeed placed on the ground, against the terms of UNSC Resolutions 1970 and 1973 (2011). Yet before Helsinki, already in the 1970s, the USA and its poodles were crossing frontiers using proxies. Introducing the Mujaheddin, the predecessors of the Taliban, wined and dined in Washington, labelled "gentlemen" by Reagan who compared them to the Founding Fathers. 9/11 was the thank-you note.

Or was it the opening of Pandora's box, where the UNO was pushed to the bottom of the pile, rendered useless, a squeaky little high-pitched voice from the edge of the grade school playground saying "Stop" Stop!" as the playground bullies set about the smallest kids on their first day at school, imposing their rules their way, smashing teeth, wrenching fingers and breaking jaws? God Bless America!

So it comes as no surprise that Algerian diplomat Lakhdar Brahimi can do nothing in Syria to broker peace, because the forces arming the terrorists are the very lobbies which pay his salary. Blaming the Syrian Government, as he has done, is an absurdity because what rightful government leaves its people unprotected and at the mercy of hordes of demons perpetrating satanic practices on unarmed men, women and children?

As an umbrella of humanitarian agencies, the United Nations Organization performs an excellent task in protecting cultures and heritage, in protecting languages, in providing shelter for women and children at risk of violence or abuse, in sponsoring education programmes and financing projects in the area of science and technology.

For this, the UNO does not have to be in the USA and given the recent behavior of its host, let us all say in one firm voice: UN out of US, or US out of UN.