The criminal responsibility of the Ukrainian Putsch

In February, a Putsch saw Arseniy Yatsenyuk, Oleksandr Turchynov and others rise to power on a wave of anti-Russian hatred, amid cries to murder Russians and Jews as thousands of Fascists took to the streets of Kiev. They must be held responsible for the chain of events they have unleashed. They have blood on their hands. 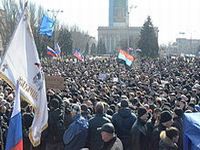 Remember when Yatsenyuk and Turchynov were claiming that President Viktor Yanukovich should be brought to court and tried for the murder of protesters in Kiev? Remember when they said they would launch an investigation into those murders? Where are the results of that investigation?

What happened, after it became clear that the shots were fired not from the police lines but from the eighth and ninth floors of Hotel Ukraina, at the police, from opposition forces, to goad them into a reaction, but also fired at the protesters below, to create a cause? I will answer the question. The investigation was shelved.

And now as this illegal self-appointed Government, in power but without the backing of the country's laws, sends its tanks, aircraft and military personnel to impose its rule in Eastern Ukraine, let us ask another question: Why if it is so popular does it have to murder its own citizens to impose its rule? Surely if there are millions of people in Eastern Ukraine who do not want to live under this "government", something is wrong. And when it comes to soldiers imposing the law with the barrel of a gun against civilians, then obviously the government is not popular. For some reason it must be. In fact, so ably have Oleksandr Turchynov and Arseniy Yatsenyuk led their country that it is the only one in Europe in which its soldiers are murdering civilians.

And now let us talk about legal matters. As self-appointed heads of State and Government, Oleksandr Turchynov and Arseniy Yatsenyuk, along with their "Minister" of Internal Affairs, Arsen Avakov, must take the responsibility for the events in Eastern Ukraine, where massacres have been perpetrated against pro-Russian protesters demanding their rights.

Oleksandr Turchynov, Arseniy Yatsenyuk and Arsen Avakov must take responsibility for the murder of over 40 persons in the Trade Unions building in Odessa on May 2, roasted alive, or shot and doused with gasoline, strangled with telephone wire as the building was torched. Oleksandr Turchynov, Arseniy Yatsenyuk and Arsen Avakov are ultimately responsible for this act of mass murder because they have claimed responsibility for the country's affairs, they have ordered their security forces to move against civilians, they have used military hardware against non-military personnel, they have unleashed bands of Fascist thugs who murdered unarmed civilians in such a cowardly manner. Other massacres have taken place, in Sloviansk and in Mariupol, where unarmed civilians were massacred with machine guns. Turchynov, Yatsenyuk and Avakov have blood on their hands.

Oleksandr Turchynov, Arseniy Yatsenyuk and Arsen Avakov must hear the screams of these people as they roasted to death from the second they close their eyes at night until they wake up in the morning and upon looking in the mirror, they will see the word "murderer" etched into their foreheads, branding them what they are.

Only in Ukraine would such acts of mass murder go unpunished, which speaks volumes about Oleksandr Turchynov, Arseniy Yatsenyuk and Arsen Avakov. What was that they were saying about President Yanukovich?