The triumph of fascism

Over one year ago, Silvio Berlusconi, Italy's billionaire media mogul and former Prime Minister, publicly declared that Benito Mussolini, Italy's fascist WWII-era dictator and puppet of Hitler's was a "good leader."  Of course, the mainstream corporate-controlled Western media scarcely covered the story except as an interceding afterthought between celebrity stories of amoral behavior and more of latest "star"-worshiping "gossip." 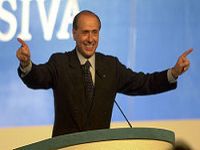 Berlusconi is not the first and only major Western leader to publicly support fascist ideology with a sickening nostalgia that would seek a return to the "glorious" days of the past.  Indeed there are many "civilized" nations in Europe such as Croatia, Estonia, and now the Ukraine that openly adore Hitler and have not come to terms with the past.  It was just surprising that a leader/member of the "elite" from a much larger nation than neofascist postage stamp banana republics would openly endorse fascism.  And now we daily witness the open celebration of fascist "heroes" such as Stepan Bandera in the Ukraine with scarcely any Western condemnation.

But this is now in vogue in the West.   As one example, a fanatical effort is afoot amongst various pseudo-intellectual "scholars" to rewrite history and yet-again blame the Serbs for WWI based on the "evidence" that Gavrilo Princip (who was a Bosnian Serb) was supported by Serbia.  Of course, whenever facts get in the way, they are just conveniently disregarded.  Bosnia was illegally and viciously occupied by Austria after the Ottoman Turkish retreat from the Balkans.  The homegrown Bosnian "Black Hand" organization comprised Bosnian Serbs, Bosnian Muslims, and Bosnian Croats and had little to do with Serbia but much to do with freeing Bosnia from illegal and brutal occupation.    When Austria declared war on Serbia due to the assassination of Archduke Ferdinand, the Serbs handily defeated the Austrians and defended their territory, throwing the Austrian army out of Serbia.

That should have been the end of it with the Austrians retreating with their tails between their legs.  But no, Germany had to step into defend Austrian "honor" and the Russians defended the Serbs which catalyzed and ignited WWI in Europe, ending the outdated and unfair social order based upon extreme wealth polarization.  The goal of rewriting history is to make a new case for fascism's reemergence into the mainstream of political discourse.

Now, it seems, we returning to this world of extremes where a small group of "elites" exercise far too much influence and control all over the world via money.  Money controls what news stories are broadcast and how they are distorted or even just plain concocted as we saw daily in the Western coverage of the Yugoslav civil wars where the lie told 1000 times becomes the truth.  Money controls which candidates get the most public exposure and therefore which get elected.

Money controls politicians when they make their "decisions" to (e.g.) barbarically and illegally bomb Serbia at the behest of corporate oligarchs.  Money also encourages traitors who sell out their own people and nation to the highest bidder as we have seen in Yugoslavia and the Ukraine.  Such is the state of our world today.

When examined this way, it now becomes apparent why the fabulously (and in many cases illegally) wealthy "elites" would long for a return to fascism.  They will be able to exercise far more control on the subjugated plebian populations of the world and sustain their parasitic existences on the unsuspecting hard working populations of the Earth indefinitely.  This is why many members of the British aristocracy supported Hitler [1].  This is why Henry Ford was a Nazi sympathizer [2].  This is why George W Bush's grandfather  (Prescott Bush) allegedly loaned money to the Nazis and aided Hitler [3-4].

Today, we see an all out effort to subvert and destroy America's democracy by controlling bought America's "leaders" to disregard our beloved Constitution and enact "laws" that remove our Constitutionally guaranteed freedoms.  As we witnessed in NATO's barbaric and illegal war against the Serbian people, politicians act first and then let American ask questions later.

The US is becoming so thoroughly corrupt that many Americans worry about an inevitable internal revolution because the politicians are no longer "of the people, for the people, and by the people" but "of the corporations, for the corporations, and by the corporations."  Despite the valiant efforts of millions of Americans vis a vis Wall Street protests (e.g.), their will is not being respected and they are finding that fascism is creeping into the American way of life, which will ultimately destroy it as it destroyed Germany in WWII.  As witnessed during NATO's illegal and vicious bombing of Serbia, Western leaders acted without any respect for international or even domestic laws  (e.g. the War Powers Act of 1973) and get judicial cronies and the media to cover their tracks [5].  And then American leaders have the chutzpah and gall to condemn Russia for its efforts to protect ethnic Russians in the Crimea!

Whether it is the recent NSA illegal spying scandal, barbaric and sinister efforts to place tracking chips in humans, goose-stepping information control/censorship within the corporate-controlled mainstream Western media: all of these efforts point toward more control of the unsuspecting general populace - more fascism.   Even in Canada, an acquaintance of mine, well known historian and author, Dr. Srdja Trifkovic was denied entry there because he was going to give an alternative, rarely heard, Serbian perspective of the Bosnian civil war for an invited academic talk [6].  However, the Canadian government did not want ordinary Canadians to hear his views.  This mere concept violates just about every cherished rule of democracy and true intellectual discourse, which require the presentation of all points of view and for these points to be openly debated.  This barbaric act of censorship is fascist, plain and simple.

It should be noted that one of the worst companies that was a strong supporter of Hitler's was IG Farben - a chemical company that produced (e.g.) Zyklon B - "rat" poison - that exterminated untold millions of Holocaust victims and benefited greatly from slave labor.  Today, Monsanto, another multinational chemical company is seeking to inflict fascist control on the world's food supply, poisoning humanity with pesticides ("insect" poison), causing massive increases in the cancer rate, rendering soil infertile, which may inevitably provoke another world war (as Vladimir Putin recently warned to total censorship/silence in the Western media) - by destroying the ability of humans to feed themselves.  This is fascism, and now it's beginning to overtake America and perhaps soon, the world.  We should prepare for yet more loss of our Constitutionally-guaranteed freedoms as governments that have removed checks and balances of power transform into tyrannies.  For now, fascism has triumphed in the West.   Those who forget their history will be doomed to repeat it.