Ukraine: The Law, the Putsch and the Imposter

The irresponsibility of the western media calling Oleksandr Turchynov "Interim President" and referring to the "new Government" of Ukraine walks hand in hand with the notion that Governments can be deposed and instated by groups of armed thugs on the streets. Turchynov claims power, but what about the massive voting fraud in the Rada? 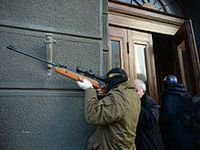 Under the law, under the Constitution of Ukraine, Oleksandr Turchynov is not the Interim President, he is an imposter, the leader of a Putsch who has as much right to declare himself or to be declared Interim President as the author of this article, or anyone else for that matter. Why doesn't Turchynov, the subject of a criminal investigation in the past, not declare himself Queen of Sheeba?

In any civilized nation, the event which rubber-stamps a Government is not an armed uprising in which thugs shoot at the police. In a civilized nation, what rubber-stamps a government is something called an election and in the last election, Viktor Yanukovich was elected President of Ukraine with 12.48 million votes, as leader of the Party of Regions, gaining almost 49 per cent of the vote against Tymoshenko's 45.47%.

Under the Agreement signed between President Yanukovich and the members of the Opposition in February 2014, the forthcoming election was to be brought forward from 2015 to late 2014, so until then, the President of Ukraine is Viktor Yanukovich. Under the existing Constitution, in the absence of a Presidential exercise of duties, it is the Prime Minister who takes office as Interim President and the Presidency is ratified by the Constitutional Court.

Mykola Azarov resigned the Premiership on January 28 2014, and was replaced as Prime Minister by Sergiy Arbuzov. In replacing the legitimate Prime Minister with Arseniy Yatsenyuk and in terminating the powers of the Constitutional Court judges, using a proxy voting system which has been outlawed during President Yanukovich's Presidency, and in the absence of many of the Party of Regions deputies in the Rada, the action of proclaiming Turchynov as Interim President and of replacing Government Ministers has no legal basis whatsoever and is therefore void under Ukrainian law and as per the Ukrainian Constitution.

A civilized country is ruled by the law and obeys the norms of its Constitution. The only time Turchynov garnered any votes was when he stood for Mayor of Kiev in 2008, and got less than 20 per cent of the vote. Hardly a democratic platform on which to stand. In fact, the more one digs into the past of Mr. Turchynov, the worse it stinks.

Formerly head of the Ukrainian Secret Service (SBU), he was the subject of a criminal investigation for destroying papers linking his ally Timoshenko with a criminal on the lists of the American FBI (Ten Most Wanted, Semyon Mogilevich). The entire political process during the last week has the same dubious stench surrounding it. For a start, how does the Rada make any decisions when most of the main political block, the Party of Regions, was absent?

How, then, is Yanukovich ousted with "over 300 votes"? The answer is simple. As you can see from the photographs, on the streets of Kiev were some innocent civilians, starry-eyed youths caught up in a drunken euphoria caused by lies and misguided promises by ex-boxers, ex-soccer players and the like but also many Fascist extremists, armed thugs who had started to shoot at the police to provoke a reaction. Look at the pictures. 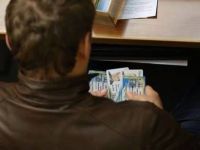 And look at the picture showing members of the Rada holding the voting cards of other members. This explains the "vote". Multiple voting for absentee members. Ladies and gentlemen, the photograph on the left denounces massive electoral fraud.

So, President Yanukovich did not "flee" leaving a void that had to be filled (the reason quoted for his "removal"), he absented himself temporarily from the fray to avoid any more bloodshed. For the CIA, 88 deaths is small fry if it justifies a change of government and a veering westwards by a mineral-rich nation on Russia's borders, but this does not a revolution make nor a Government constitute. Had Viktor Yanukovich remained in his palace, it would have been stormed by these Fascist thugs and his armed guard would have had to open fire, worsening the situation further by creating more bloodshed.

The entire Putsch was hastily carried out and was entirely the result of political interests from beginning to end. The education minister, Dmitry Tabachnik, was removed because his policy had been "too pro-Russian", the Russian, Hungarian and Romanian languages have for now lost their status as official languages of Ukraine and the Prosecutor-General, Viktor Pshonka, was detained, because he was identified with the imprisonment of Timoshenko, for abuse of power.

Members of Parliament inside the Rada had declared that they felt they had to do something quickly otherwise the crowd outside would have stormed the building.

This, in a civilized nation, is no way to conduct policy, has no legal foundation whatsoever and therefore, Mr. Oleksandr Turchynov is an imposter and a Putsch leader who brings ridicule to his country. Who needs a circus when Kiev is crawling with clowns, and why doesn't Turchynov declare himself Queen of Sheeba, King of Planet Zog of the Mayor of Saturn...together with his less than twenty per cent of the popular vote? 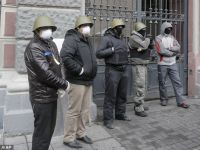 The question is, Oleksandr Turchynov knows this, and from the second he wakes up in the morning, to the second he goes to bed, he knows he is an imposter, he knows he was not elected and he knows that his Putsch dissolved the only legal bodies with the power to conduct affairs of State as he usurped the presidency from Viktor Yanukovich.

Oleksandr Turchynov is not, legally, the Interim President of the Ukraine and his Government is not a Government - it is a clique of imposters. Any foreign powers greeting and recognizing them is guilty of criminal association. This is the law.