This year, for the first time, the schoolyard bully blinked, his chin quivered and while he did not yet run screaming home to mommy, the other members of the playground stood six inches taller, solid in their resolve. Things had changed in an instant, the playground would forever after be a nicer place for all. 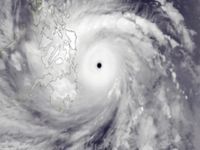 Monster storms, NATO placed in check, its evil schemes supporting terrorists, rapists, torturers and murderers revealed for all to see, Russia standing up and crashing an iron fist on the table, the night sky gaining two stars lit by Hugo Chavez and Nelson Mandela, both beacons of freedom from oppression, all these events highlighted the year 2013.

The much-vaunted "Arab Spring" was shipwrecked by January, its second anniversary, as the people of Egypt turned against Mohammed Morsi and his Islamists, as Libya descended into utter chaos, and as it became obvious what monsters are behind the Syrian "Revolution". Morsi lasted as long as his first anniversary of his inauguration on June 30, when one million Egyptians took to the streets and on July 1 he was deposed by the military.  While it was obvious that local protests over the price of bread and corruption would be hijacked by the most demonic elements financed from foreign countries, the consequences of this interference were perhaps not foreseen by the FUKUS Axis (France-UK-US) acting behind the scenes... or were they?

The penny takes a long time to drop. Announcements from the Syrian opposition (now we see factions of these using human heads as soccer balls) about being open to peace talks but without the participation of President Assad (although he is backed by the majority of the population) were accompanied by a backdrop of arrogance from media outlets in the FUKUS Axis countries stating that "Assad had to go" while the most demonic terrorist elements were financed and equipped by the FUKUS Axis itself or by its minions in the Gulf. The result was the most appalling human rights abuses revealing the criminal nature of the perpetrators.

From the west, only words of encouragement. By mid-April, the UK and France were already complaining that the Syrian government was using chemical weapons, without a shred of proof, a claim backed up by Israel which itself carried out two terrorist strikes in Syria on May 2 and May 5 in Damascus. The claim was repeated in early June by Human Rights "Organizations" working inside Syria, yet again accompanied by a lack of evidence implicating the government and in desperation came the August 21 chemical weapons strike in the Damascus suburbs of Eastern Ghuta, Zamalka, Ain Terma, Hammuriyah, Saqba, Kafr Batna, Harasta, Mudamiyah, Jobar and Irbin - areas where the Syrian government had forces deployed, on the eve of the UN weapons inspectors' visit.

While the west foolishly jumped the gun making absurd statements blaming the Syrian government, what government strafes its own troops, on the eve of an inspection, when anyway it was patently obvious that it was the Syrian terrorist opposition that carried out the strikes, and later, indications appeared that western intelligence not only knew the terrorists had chemical weapons, but knew they would use them and some quarters considered such use "acceptable" if it provoked an invasion.

Let us make no mistake about it: the hype was there on the political front, Obama asking his military to draw up plans and Cameron speaking about making the right choice.  As Russia and China made it perfectly clear behind the scenes that they would not this time go along with a western-backed Resolution (no doubt buoyed by the spectacular mission creep in Libya), and with Cameron remembering the fact that war crimes lawyers are working overtime to get Blair, Bush, Cheney and company into a court in the near future, the British parliament provided Obama with a get-out card. It was a world-changing moment.

The ugly side of Islamist fundamentalism

As if anyone needed any reminders, the ugly side of Islamist fundamentalism reared its head in London, where on May 22 Lee Rigby, a 25-year-old soldier, husband and father of a young boy, was hacked to death in the street by two machete-wielding lunatics, this a month after the (Chechen) Tsarnaev brothers justified their cowardly act of carnage at the Boston Marathon with Islamist fundamentalist arguments. Ironically, the arrest of Nazih Adbul-Hamed al-Ruqai, of al-Qaeda, captured in Tripoli, was an admission by the FUKUS Axis that it had got the Libya question wrong, but too late it was - the country lies in tatters, a failed State after Gaddafi built the world's poorest country into the one with the highest Human Development Index in Africa, after Gaddafi was the first world leader to issue arrest warrants against al-Qaeda. He was the first to see the writing on the wall and he knew who was pulling al-Qaeda's strings.

The ugly side of western interventionism

In the equation which constitutes the western realpolitik at the beginning the third millennium, intrusion, insolence and interventionism are unfortunately constant factors, as we saw at the beginning of December in the Ukraine. Yet again we saw corporate media outlets presenting nonsensical stories about hundreds of thousands of protesters in Kiev's main square, Maidan Nezalezhnosti, at a time when after the initial buzz, cameras showed a few dozens, many of whom were laden with New Year's shopping. So much for another "Orange Revolution", where is this story now?

In early November, the Filipino people stood firm, with dignity, as Nature unleashed perhaps the worst storm to have hit land that the world has known in recorded history. Winds of 315 km/h destroyed entire villages and caused between six to eight thousand deaths. International aid took a week to appear, but when it did, it made a huge difference and provided a lesson in what humankind can do when we come together rather than spending 2 trillion dollars a year developing weapons to kill each other.

From Benedict to Francis, from simplicitas, probitas, dignitas to Solidarity

A further lesson in humility was provided by the resignation of Pope Benedict XVI, aware of the fact that a modern-day Pope must have the physical resistance to perform a semi-permanent public relations exercise as Head of State as well as Head of the Church and the result of the conclave was the appointment of Jorge Mario Bergoglio as Pope Francis, whose message is solidarity to alleviate the suffering of poverty and difficulties created by the boom-and-bust neo-conservative policies pandering to the whims of the corporate elitist lobbies which control the world economy these days and which in turn have led to a profound economic and financial crisis.

The passing on of Hugo Chavez at the beginning of the year, on March 5 and Nelson Mandela at the end of the year, on December 5 were reminders of how much personal commitment can achieve, how much difference can be made by policies and approaches which are based on inclusion, education, development, delivery of public services and the creation of opportunity replacing Fascist oligarchies and racist tyranny, yesteryear backed by western paymasters.

The Earth lost two icons, the night sky gained two stars, guiding us along a pathway of fond memories lest we should forget their message, shining a light on the success of a social approach to crisis management instead of oppression.

If we analyze every year and try to find the lesson it teaches us for the next, the conclusion from 2013 is that the world has tired of deployment of troops, war and intolerance, be this religious, racial or gender-based. This places NATO in a bad place, since it will now have to justify its every action and constantly reinvent causes to perpetuate its existence, when everyone knows it is the military wing of the energy, weapons and banking lobbies.

2013, however, teaches us that rather than perpetuate animosity, bitterness and hostility, if we seize the opportunities to provoke lasting change for the better, forgiving those who fight against our ideals, striving to network and create synergies using the tremendously important tools at our disposal, then every single man, woman and child who is digitally included can make a difference.

Let us therefore make digital inclusion the battle-horse of our policies in 2014, for surely, it is time that every child born into this world should enjoy equal opportunities as a birthright and it is time that rights are no longer based upon whether one is born this side or the other of an invisible arbitrary dividing line called a national frontier or boundary.

The key words from 2013 for 2014 are development, solidarity, inclusion, tolerance and the courage of our convictions while following an approach of humility over arrogance.