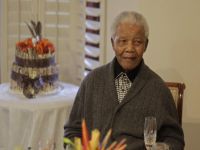 I would do no justice to Nelson Mandela's biography by copying and pasting parts of it here - what he achieved is well documented elsewhere. However, it is important to understand the relevance of Nelson Mandela's long and fruitful life and make sure that its lessons serve as an example to the rest of Humankind throughout our future history.

Nelson Mandela serves as a shining example of how a person can be branded an outlaw, a terrorist and a criminal by an unjust system and then go on to be proclaimed a hero and take the highest office in his country, due to his drive and determination to free his people from the yoke of apartheid, an example of the meaningless nature of "labels", for their relevance depends on who writes them.

It was not only as a lawyer that he took up the fight against colonialism and apartheid; after first supporting a non-violent campaign with the South African Communist Party, he understood that the only way to make any progress was through confrontation, despite the massive odds stacked against him and co-founded the militant movement Umkhonto we Sizwe.

The Rivonia Trial sent him to prison for 27 years of his life, on Robben Island, in Pollsmoor Prison and in Victor Verster Prison from 1962 to 1990, when he was released. It is here that the lesson begins.

Understanding that the climate was favorable to change in South Africa, had he wished, he could have caused a blood bath as the black population surged into positions of power, overthrowing the whites in an unruly and disorganized fashion. But Nelson Mandela chose another path - without rancor, without revenge and without sponsoring rivalry.

He chose unity, he chose inclusion, he chose togetherness, he chose reconciliation. The result was his National Unity Government, a new constitution and the Truth and Reconciliation Commission. Resisting the opportunity to hang on to power, he served one term as President from 1994 to 1999 (and as President of his African National Congress Party from 1991 to 1997), then stepped back and concentrated on humanitarian projects with his wife Graça in the Nelson Mandela Foundation, fighting poverty, fighting AIDS, raising awareness and widening the scope of educational programs.

To say that the successful transition of South Africa from apartheid to a multi-racial and multi-cultural society was down to one man, would be an insult to the profound changes Nelson Mandela instilled in his country through engaging others outside the inner Xhosa circle. However, to say that South Africans, all South Africans, have a legacy to respect, is a fact.

And the Legacy goes far wider than the frontiers of South Africa. Madiba, you taught us all how we can live together in a rainbow world. For that, thank you, Madiba. Dead or alive, you showed us the way, and this way, you will live forever!