The regulation of Islamic communities in Western Europe has become a top priority for the Institutions and such process is extremely complex due to the pluralist nature of Islam and its often fragmented reality linked to the different cultural and social backgrounds of the Muslims present in Europe as well as the various theological and juridical approaches. These elements have an evident impact on the phenomenon and emphasize different ways of living Islam among the Muslim population in the "Old Continent". It is hard to say if in Europe we are experiencing different types of Islam or if we are seeing one Islam with the reflections of various cultural peculiarities either from North Africa and the Middle East, Sub-Saharian Africa, Central or Southern Asia and most likely the two thoughts do not differ so much from each other. 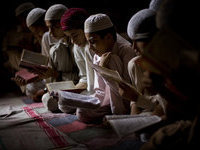 Although the relevant fact is that such diversified reality needs to find some common ground in order to reach an agreement on regulation policies with the European governments in order to guarantee a positive response to the need of Muslims on one hand and to adapt to the requirements of the State  on the other.

In Europe there are different types of political approaches to governing and engaging with Muslim communities and the two most known are the British and the French; respectively "multiculturalism" and "laicite'".

In the United Kingdom the main concern was how to protect cultural, ethnic and religious diversity through the implementation of multicultural policies while at the same time promoting a sense of belonging to British values. This brought to a "diversified" and "horizontal" approach with greater freedom of the authorities in engaging with many different official and unofficial Muslim organizations and associations, which also means more confusion, lack of top-down control and an environment that facilitates the infiltration of Islamic extremists in regard to both funding and preaching.

In France on the other hand the policies focused on the separation of state and religion in order to promote secularism and on the compatibility of Islam with French republican values. An official Muslim council (CFCM) was created in order to centralize and represent Islam on an institutional level. In 2005 the French Foundation for Muslim Works was founded in order to provide resources for the maintenance of mosques and for the training courses and certifications for imam. The distribution of resources are overseen by government officials.

Such model has been accused of being restrictive and at the same time of having to adapt to the needs of the Muslims. The concept of assimilation politically incorrect.

And where does a world power like Russia stand on such issues? Russian policies have often been accused of being excessively authoritarian with a strict "top-down" control over religious expressions and with an emphasis on assimilation; is it really so? Or is it a managed partnership based on pragmatism between the State and the recognized Islamic representatives?

If the French model can somehow be seen as closer to the Russian one, it is evident how the British model has failed, generating alienation among the Muslims, lack of integration and facilitating the creation of parallel societies with several areas in the country where it seems to be in Yemen or Saudi Arabia rather than Britain.

The British approach also facilitated the infiltration of many radical organizations and individuals and it is not a case that figures such as Abu Qatada, and Abu Hamza were able to live and preach in the UK for long; an evident example is the case of Finsbury Park mosque. Another radical preacher still active in the country is Anjem Choudary, linked to the Islamist group Islam4UK.

Russia's approach is not new and finds its roots way back at the time of Catherine the Great who applied great tolerance for Muslim communities while at the same time pursuing control over religious activities. As quoted by Malashenko :"The wise Empress has realized back then the menacing salience of what is now known as the Islamic factor".

The approach is very clear: article 14 of the Russian Constitution states that the Russian Federation is a secular state and that religious associations are separated from the State and equal before the law. [1]

This means that if on one hand the State provides support in equal measures to all recognized religious bodies on the other hand loyalty to the state is requested to all, including Muslims. This clearly sounds more like a managed partnership rather than an authoritarian approach.

The Russian government has direct relations with the Council of Muftis of Russia (Sovet Muftiev Rossil), formed in 1996 independently from the State. The SMR is a Muslim body with official status, strong public presence and the task of representing Muslims and mediating between State demands and the needs of Muslim citizens.

Another task of the SMR is solving problems linked to the internal fragmentation of the Islamic communities within the Russian Federation.

Russian policies on the regulation of Islam also had the aim of preventing external interferences linked to radicalism as it occurred in the Northern Caucasus with Wahabi and Salafi influences that had the objective of eradicating the tolerant Sufi presence in the area in order to replace it with violent jihadi ideology.

As explained by researcher Artem Kroupenev: "In the Early 1990's these "Wahhabi" emissaries operated according to a simple scheme: local Mullahs and Imams were offered one-time grants of $1-1.5 thousand plus a monthly salary of $100-150 in return for their consent to join the Wahhabi sect. Thus, Sufi Chechens encountered for the first time active propaganda by members of the Salafi-Jihadi movement, who encouraged Chechens to reject Sufism and follow a radical interpretation of Islam. In addition to "Wahhabi" propagators, Chechnya became a popular destination for Middle Eastern militants and mercenaries, including the Afghani mujahedeen, who were supplied with weapons and transferred to the Caucasus.

In February 2003 Russia banned the Muslim Brotherhood and labelled it as a terrorist organization which, according to Russian authorities, coordinated the creation of an Islamic organization called The Supreme Military Majlis ul-Shura of the United Forces of Caucasian Mujahedeen, led by Ibn Al-Khattab and Basaev.

According to the decision of the Russian Supreme Court:

"The Muslim Brotherhood is an organization, basing its activities on the ideas of its theorists and leaders Hassan al-Banna and Sayyid Qutb with an aim of destruction of non-Islamic governments and the establishment of the worldwide Islamic government by the reconstruction of the "Great Islamic Caliphate"; firstly, in regions with majority of Muslim population, including those in Russia and CIS countries. The organization is illegal in some Middle East countries (Syria, Jordan). The main forms of activities are warlike Islamism propaganda with intolerance to other religions, recruitment in mosques, armed Jihad without territorial boundaries. The Supreme Court of Russia". [2]

At the same time the Russian Supreme Court also put Hizb ut-Tahrir and 12 other groups on a list of banned organizations and the Russian security forces later proceeded with several arrests of members linked to such group who were found in possession of automatic weapons, grenades and explosives.

The Russian approach seems to be extremely pragmatic, with greater coordination between the Institutions and the official Muslim representatives, direct financial support and prevention of radicalism which doesn't only damage Russian but Muslims in the first place.