A wise decision by the Ukraine not to fall into the European Union's web, not to fall for the siren's song, not to believe the false promises of prosperity, not to follow the starry-eyed misguidedness of some of Ukraine's young population who see the EU as some sort of Nirvana. Viktor Yanukovich just saved Ukraine, and them, from a terrible fate. 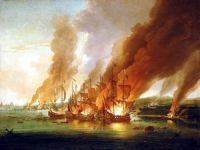 Let me tell you a story. Once upon a time there was a farmer, the Big Farmer, who worked hard, so hard in fact that every square inch of his land was productive. One day he decided he needed some extra space for his workers to produce more, so gradually he invaded the land of the neighboring farms, some less productive than others. The Big Farmer made allies with some, massacred others and became most unpopular, so much so that the other farmers gathered together and formed an alliance against him. Collectively, they won and the Big Farmer was crushed in the Great Conflict.

Crushed, but not destroyed. Shortly after the end of the Great Conflict, the other farmers and their friend on the other side of the Ocean decided that they needed the strength of the Big Farmer to protect them and to be a part of a strong economy so they financed the Big Farmer to make his lands productive again.

It took just a few years before the Big Farmer was as strong as he was before. This time he knew that by physical invasion of territories outside his lands, he would incur the wrath of the other farmers, so he devised the Great Plan.

The Great Plan was conceived with the connivance of the Fat Cow farm lying to his west, a large piece of fertile agricultural land which the Big Farmer had invaded twice already before the Great Conflict. The Great Plan was to sign an agreement which would produce a Union of farms, an agreement drawn up with such beautiful language that all those that read it would fall into a trance, become hypnotized and strive obediently towards the Plan.

As the Big Farmer grew stronger and more powerful, he also became richer and was able to pay the other signatory members of the agreement sums of money, convincing them that it would be more comfortable for them to sit on their backsides in the sun, playing cards and dominoes, to destroy all their agriculture so that their farmers could rest and get drunk, to destroy their industries so that their factory workers could lie around at home on their backs zapping between TV channels, to sink the fishing fleet so that the fishermen would spend more time with their wives than with the, erm...mermaids.

"Being paid not to work? Why, what a wonderful idea!" said the eager new signatory members of the Plan, which appeared so attractive in fact that more and more members lined up to join, including the Eccentric Islanders off the west coast of Europe, long suspicious of their continental garlic-eating, mustachioed  neighbors.

Suddenly, the spell wore off, but too late. One fine day the signatory members awoke with a thumping headache as it suddenly dawned upon them that they had no means to fish, produce machines or farm and if they wanted these products they had to buy them...from the Big Farmer. The signatory members suddenly realized that their children had no jobs to go to because the factories had been destroyed, their fishing fleets had been sunk, the apple trees had been ploughed into the ground and their pigs and chickens had been slaughtered.

There was not enough money in their economies because their States were facing ever-increasing social welfare bills, increasing unemployment benefit pay-offs and decreasing revenue from taxation. Families were torn apart because the second and third generations were pouring out of the Farms looking for work elsewhere, because there was none at home.

Workers from poorer lands outside the Farms were drafted in to make up the shortfall and soon the entire social and economic fabric of the Farms changed drastically. Coupled with this, many of the farmers made the mistake of adopting a common currency, denying them any little leverage they had in supporting their economies or at least playing a part in their management, while at the same time the Big Farmer imposed constraints upon them in a top-down approach which made more sense to Him (now written with a capital H after a special edict) than it did to them.

For those Ukrainians who wish to join the EU, go and see for yourselves. Take your pick. In the UK there are 80,000 homeless children, in some areas of the EU there is 40% youth unemployment, in many cities you dare not venture out at night for fear of being attacked by drunkards or drug addicts, home invasions are rife, you come out of a hospital more ill than before you went in, education systems struggle to cope with under-funding, the banks do not lend you enough money to buy a house, rents are skyrocketing, unemployment is the norm, keeping a job depends on working in slave-like conditions in return for less and less and a super-class of countless political echelons costs more and more to fund, like a gluttonous monster, a flesh-eating bacterium devouring all around it.

Welcome to the European Union. For those Ukrainians taking to the streets in protest, you don't know what you are missing.