Qatar World Cup: Over how many dead bodies?

Qatar, one of the richest countries in the world, just because it sits on massive resources of hydro-carbons, and the pariah of the international community with its alleged funding and aiding of terrorist groups in Chechnya, Libya and Syria, has been accused in a recent report of abusing migrant workers and having a deplorable safety record. Is this what FIFA stands for? 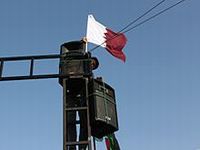 The ruling al-Thani family has no formal links with terrorist groups, neither does the State of Qatar, obviously. However, the aid from the Islamic Charities Jamiat Qatar al-Khair, Sheikh Eid al-Khairiah, the Qatari Red Crescent Society and RAF are controlled by prominent officials, some from the al-Thani family and this is the alleged mechanism through which funds are directed to radical and racist Islamist groups.

The west in general, and the United States of America in particular, look the other way because Washington has its largest naval base in the region on Qatari soil, the base it used to launch the illegal and murderous attack against Iraq. The latest accusations against this pariah state come from Amnesty International, which has released the findings of a study, The Dark Side of Migration: Spotlight on Qatar's construction sector ahead of the World Cup. Its revelations are as sickening as they are shocking.

"Employers in Qatar have displayed an appalling disregard for basic human rights of migrant workers," states Salil Shetty, Secretary-General of Amnesty International. Apart from the abuses listed above are "shocking standards of accommodation" and "harsh and dangerous working conditions".

This, along with the endemic racism among certain sectors of Qatari society, who refer to the migrant workers, mostly from Bangladesh, Philippines and Nepal, as "animals".

Conditions include working 12-hour shifts seven days a week, being "treated like cattle".

It therefore comes as no surprise to learn that in 2012, more than one thousand people were admitted to the trauma unit in Doha's main hospital with injuries sustained by falling from heights. Ten per cent were disabled for life, the mortality rate was "significant".

Conclusion: do not go to Qatar to work, do not buy goods made in Qatar and boycott the World Cup in 2022, whose stadiums are to be built with the blood of the slaves working on them. Is this what FIFA stands for?