The death toll from arguably the world's worst typhoon ever to hit land at the end of last week is still not finalized, figures ranging between two and ten thousand. Yet given the degree of devastation, how many more are buried under rubble? To note, the heroic dignity of the Filipino people as another massive storm is set to strike. 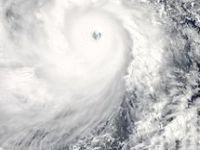 The Filipino people are used to storms, facing up to twenty major weather events in any one given year. But none of them would remember the monster called Typhoon Haiyan (called Typhoon Yolanda in the Philippines) which hit land last week, sweeping across the central islands with wind speeds of up to 200 mph, or 320 kph, some gusts being stronger and a tidal surge with the height of a five-storey building sweeping all before it.

The videos taken by terrified victims as their houses literally blew apart, their belongings flying around them together with trees, corrugated iron sheets and other debris, are utterly terrifying, even from a comfortable editing room thousands of miles away.

Apart from the death toll, there are eleven million people directly affected by the storm, and up to 700,000 homeless or displaced, many children, some who have lost their families. Yet the first aid to arrive has been provided by the Filipino residents themselves and the ex-patriates who have organized themselves into providing money and supplies. Channeling food and water from these emigrants and locals who are pooling their resources into centres where the Filipino citizens gather to work as volunteers making food packages, the local organizers then take the parcels to distribution centres where staple products are handed out.

As the international relief operation swings into action at the airports, with huge Antonov AN-225 and C-130 Hercules transport aircraft rubbing shoulders on the runways, the logistics on the ground is extremely complicated, with power lines down, electricity and water supply networks out, stocks destroyed or contaminated, roads blocked or swept away, bridges down... medical facilities are under-staffed, medical supplies are running low or running out. Coupled with this, the long-term effects are bound to be devastating because the typhoon struck just as the rice-planting season was beginning. Hundreds of thousands of hectares (the size of a football stadium) have been razed.

The UN World Food Programme describes the situation as a "logistics nightmare" as an appeal for 301 million USD is launched by the Office for the Coordination of Humanitarian Affairs to cover the first six months of activity to provide shelter, water and food and medical treatment.

And with this, exploitation, as women and children begging for food by the roadside expose themselves to abuse from the (thankfully few) immoral vultures which circle around such tragedies, trying to make a picking off the misfortune of others.

With some areas cut off, the priority is to provide portable radio equipment so that stories can get out and direct much-needed aid to those most affected. Human tragedies, lives torn apart, families destroyed... and how many people to this day lie trapped under fallen debris, cut off and desperate?

If ever there was a reason for us to open our pockets and give generously as we eye the Thanksgiving table and the Christmas sales, this is it. Those heroic and dignified Filipinos pulling together to redress the balance as another tropical storm promises to hit deserve our attention and our help.