The European Union likes to parade itself as a paragon of political correctness, the do-gooder of the international community, when in fact its policies reek of the imperialist intrusiveness practiced yesteryear by so many of its member states. The EU's illegal and unethical trade policy regarding fisheries is a prime example of this. 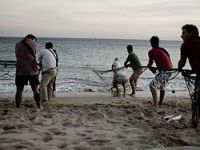 The fish off the coast of Western Sahara belong to the Saharawi people, of Western Sahara. The stocks do not belong to Morocco because Morocco's presence in Western Sahara has not been sanctioned by international law and is therefore illegal. Why, then, does the European Union negotiate the same fish stocks with Morocco?

If Western Sahara is illegally occupied by Morocco, then what is the European Union doing negotiating anything with this country if the EU is so politically correct, and secondly, why is the EU negotiating with what to all effects and purposes amounts to stolen goods, with the thief?

Furthermore, why does the EU not safeguard, at the very least, the rights of the Saharawi people and why does the EU not take affirm and public stand on the issue of the annexation of Western Sahara by Morocco? Why is there not one single clause about human rights abuses in the treaties it negotiates with Morocco?

For the European Union, money matters more than morals, trade in itself is more important than the origin of the goods it trades in, even if these are stolen property and we can also conclude that the European Union doesn't give one hoot about the Saharawi people or their rights, just so long as it can get its hands on their resources with the minimum of effort.

If the EU fishes in Western Sahara's waters without the prior and express consent of the authorities of Western Sahara, not Morocco, then the European Union will be violating international law and the agents responsible for this will be conducting criminal activity.

Meanwhile Morocco must be laughing all the way to the bank. This occupying country stands to gain around two billion Euro a year of taxpayers' money under the new protocol (probably to be signed later this month).Perhaps the people of the European Union would like to express their opinion about this question, namely why their hard-earned cash is being used in criminal activity, to steal fish which belong to the Saharawi people.

Over 100 UN Resolutions have been passed stating that the Saharawi people have the right to their self-determination. And what does the EU do? It cavorts with thieves and breaches international law. So much for an ethical and politically correct policy.