Secretary of Blair War Crimes Foundation asks UK Secretary of State for Justice to initiate penal sanctions against Blair for war crimes. The use of depleted uranium (DU), white phosphorous, mercury, napalm equivalents and other  toxins against  a civilian population penned up in Fallujah in November 2004, were a significant war crime. 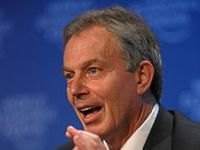 The Secretary of State for Justice

Re:  Obligations of the UK High Contracting Party to the 1949 Geneva Conventions IV Article 146

I assume that, since you have not replied to my letters, dated 18 March and 29th April 2013, asking for your implementation of The 1949 Geneva Conventions IV Article 146, I have finally found the identity of The Representative  of The UK High Contracting Party to those Conventions.

All Departments in Whitehall, that could have been the Representative, have, like servants in  Kafka's Castle,  sent immediate replies to my requests, saying that it is not their Department and that I should try another.

My tutor, Sir Harry Hinsley, met Hitler in Munich in 1937, I followed his footsteps, but to Munich and Nuremberg.  As a historian you will know that adjacent to Courtroom 600 at Nuremberg is a museum of the 1945 - 6 trials and a collection of the 40 Blue Books which recorded all the proceedings.

The museum pays tribute to the 2,000 idealistic American, Russian, and British men and women who spent two years recording these trials and composing the 1946 Nuremberg Protocols, which formed the basis of 1949 Geneva Conventions IV.  Their idealistic aim was to make it impossible for such a war of aggression again.

Vladimir Putin, writing in the New York Times (13 September 2013) referred to the importance of The Geneva Conventions, that Nations must support the United Nations, not letting disintegrate as did the League of Nations.  He continued: " the preservation of law and order in today's complex and turbulent world  is one of the few ways to keep international relations from sliding into chaos." Fortunately, in the case of Syria, his words, so far, hold the day, and further violence by the USA, UK and France in the Middle East is delayed.

I have pointed out to you the strong evidence that Anthony Blair and our ally, the USA, have, in the conduct of the Iraq war, committed gravest breaches of the Geneva Conventions. The use of depleted uranium (DU), white phosphorous, mercury, napalm equivalents and other  toxins against  a civilian population penned up in Fallujah in November 2004, were a significant war crime.

Long term damage to the natural environment and disastrous effects on the genetic material of the Iraqi population, have been linked to a massive increase in horrendous birth defects, and grotesque cancers on childrens' faces and bodies, which you will surely have observed  on CNN, Sky News and on You Tube.

The agonised look of a Fallujah mother staring at her otherwise beautiful child, marred by a grotesque growth on her face - and the hatred and despair on that mother's face, is of hauntings..

Yet Whitehall continues to deny that DU is harmful, stating that its use is perfectly legitimate under international law. The then Defence Secretary Geoffrey Hoon said of the use of "Storm Shadow" missiles in the initial "Shock and Awe" attack, and use of cluster bombs over Hilla, "I will not compromise the safety of our armed forces by restraint." (As you will know, pure military expediency was not accepted as a defense in the trial of Hermann Goering).

Your Ministry of Justice is required to act, lest it become an Orwellian Ministry of Injustice by inaction. Inaction in itself is breach of The Geneva Conventions.  As, by default, allowing the continuation of effects of toxins and radiation on the genetic material of future generations to continue. The radioactive 'half life" of depleted uranium, is 4.6 Billion years.

Another effect referred to by Vladimir Putin, is that inaction under international law encourages continuous wars, death and chaos.

The judgement of future generations, may find inaction itself a war crime. Indeed, Article 146 asks for suppression of those breaches of the Convention IV.

If international law is disregarded, the Ministry of Defence will continue to claim that DU is benign. Such weapons will continue in use in "humanitarian" wars as Afghanistan, Libya and elsewhere. Wider UK sales of this weaponry will continue, citing  depleted uranium's unique penetrating power and incineration properties.

However DU dust respects neither boundaries, or time. In the future, your  grand children, may, like Kenny Duncan or Jenny Moore, join the army develop genetic damage as a result, or, say,  work in Iran, and drinking coffee in Tehran, on one shallow breath, absorb an  alpha particle carried on the wind, resulting in an agonising cancer or leukaemia. Neither is inaction an option in the face of lethal, unending damage for future generations where ever these weapons are used, for the population and our own and coalition forces.

In  further support of Vladimir Putin's call to respect the Geneva Conventions I refer to my letter of 1st March 2013, Indictment No.1, on the conspiracy by Blair and others to go to war by: "wrong footing Saddam on the Inspectors".

At Nuremberg, in 1945-46, conspiracy to go to war was regarded  as: " the supreme international crime." In my letter to you I pointed out that Tony Blair, was fully aware, in March 2003, that there were no weapons of mass destruction in Iraq, yet in Parliament at the crucial debate of 18 March 2003 he pretended that there were. I quote from my letter of 1st March 2013  to you :

Unfortunately Hans Blix's report on the absence of weapons conflicted with the conspiracy between Downing Street and the USA to wrong foot Saddam  in order  to justify  waging  a war in March 2003.  Sir David  Manning reported in  a secret memo, that on 31 January 2003 Tony Blair met George W. Bush in the US and they discussed the fact that probably no weapons would be found.

Bush was reported by Manning at this meeting to suggest three alternatives.  One was to "fly U2 Reconnaissance aircraft with fighter cover painted in UN colours. If Saddam fired on them he would be in breach."

Instead  Hans Blix  was  recalled and instructed to abandon his inspection  on 28 Feb 2003. War was declared 2 weeks later. Blair, however said, on 18th March 2003, that the idea that Saddam Hussein had indeed destroyed these weapons was" palpably absurd. " I suggest that Blair was lying and knew he was lying .

If Sir John Chilcot's legal Advisor, Ms Sara Goom's  letter of 8th March 2011 is taken seriously ( copy enclosed ) Sir John has relied upon me to report to "the appropriate authority " evidence of criminal offences that have emerged from his Inquiry. If the report of Sir John's concern regarding the possibility that there was a conspiracy to go to war between Blair and Bush, as reported in The Times of July 20th 2013, is correct,  then Sir John  may be concerned at my failure to alert you to an  implementation of Article 146. I am therefore sending Sir John Chilcot a copy of this letter.

Finally you will surely have read Blair's biography "A Journey", which states on page 571:

"I had a vision for Britain. All the way I had believed I could and would persuade the country it  was the right choice, the modern way, bigger than Iraq, bigger than the American Alliance, bigger than any one thing; a complete vision  of where we should be in the early twenty first century; about how we finally overcome the greatness of our history to discover the full potential of our future."

I suggest to you, as Secretary of State for Justice, that such a  vision should be  restrained before it is emulated and allowed free rein.

I shall be grateful if you will confirm that you are indeed the Representative of the High Contracting Party to The 1949 Geneva Conventions IV.

The most reverend Desmond Tutu

Dr. Yakovenko , the Russian Ambassador to the U.K.

His Excellency Mohammad Khazaee, the Iranian Ambassador to the U.N.

His Excellency Bernard Emié, the French Ambassador to the U.K