Trayvon Martin: I hate to say I told you so. Part II 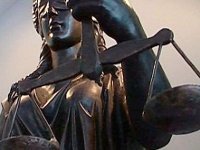 Several years ago, I participated in a federal civil rights trial where the Plaintiff (our client) was a young African-American man who had been severely bitten by a police dog.  The Defendants were the officer on the canine unit who handled this dog, and the police department that employed him.  Since I was relatively new to the legal profession, I was "third chair," which meant my job was to explain the rulings and proceedings to our client as the trial progressed.

Our client's stepfather had grown up in Georgia during the 1940s and 50s, when racial segregation was legal, and had seen more than his share of racial and economic injustices.  Yet every day, without fail, he sat in that courtroom with an unwavering belief in the ultimate fairness of the "system."

I was not as confident.  Although the incident happened in a county that was racially diverse, the jury pool was almost completely comprised of white people from rural counties where racial diversity was virtually non-existent and most police officers were equated with "Andy of Mayberry."

Testimony indicated that our client was an occupant in a vehicle that had been pulled over late one evening.  Thinking he had a warrant out for his arrest on a shoplifting charge, he fled the vehicle, and a canine unit was called in to track him.  He was subsequently discovered hiding in a garage, tightly wedged between two cabinets.

The officer handling the dog that located our client testified that he drew his gun, aimed the beam of his flashlight into our client's eyes to temporarily blind him, and then ordered him to raise his hands and step away from the cabinets.  Although our client complied, the dog still attacked him, ripping away almost all of his calf muscle.

Further testimony revealed that this particular dog, when handled by this particular officer, had a "bite ratio" of  80%.  This was especially significant because the highest bite ratio of the other dogs on the department was just 20%.

From this evidence, it was clear that one of two scenarios had occurred in the garage that evening, and both favored our client:  First, the dog bit our client on its own accord, which made the department negligent for allowing a poorly trained dog with an 80% bite ratio to remain on the streets, OR; Second, the officer intentionally ordered the dog to bite our client, which made the department negligent for allowing this officer to handle a canine, and the officer liable for punitive damages for intentionally and/or recklessly injuring our client.

Yet, after just a few hours of deliberation, the jury returned a verdict in favor of the department and the officer.  To illustrate just how egregious this verdict truly was, the court reporter, who had witnessed more than her share of bad verdicts over the years, actually burst into tears and later remarked to me, "The Defendants are lucky I wasn't on that jury."

Which brings me to the point of this essay.  The jury instructions in this case specifically stated that because the bite had not occurred while our client was in the act of fleeing, the jury was to focus solely on the events that had transpired in the garage.  Since our client was surrendering and obeying the officer's instructions, there was no justification for the dog to attack or for the officer to command him to do so.

I recalled this verdict after the recent acquittal of Trayvon Martin's killer, George Zimmerman.  On the surface, of course, there appears to be one essential difference:  While the jurors in the dog bite case clearly ignored the court's instructions, the jurors in the Martin case claimed they strictly adhered to them.

But the grim reality is jurors will routinely obey or disobey court instructions at will whenever they want to render verdicts that reflect their bigotries, biases, and preconceptions.

For evidence of this, one need look no further than the juror who first spoke publicly about her role in the Martin case-known only as B37.

During interviews with CNN, B37 stated that she favored Zimmerman's acquittal early in the deliberations, and was the first to argue that obedience to the jury instructions underscored her verdict.  Yet she also discussed how Detective Chris Serino's testimony that Zimmerman was "truthful" made a "big impression" on her.

The problem with this "impression" is the trial judge specifically instructed the jury to disregard Serino's opinion about Zimmerman's alleged truthfulness.  Apparently, B37's reverential desire to follow court instructions did not include instructions that interfered with her belief that (in her own words) Zimmerman's "heart was in the right place."

Furthermore, if she used Serino's statement to convince other jurors to acquit Zimmerman, then his acquittal was at least partially based upon testimony that the jury should never have considered in the first place.

This exposes one of the biggest fallacies of America's legal system:  That a "corrective" instruction will magically dispel prejudicial, biased, or inadmissible testimony or evidence.   In the legal world, attorneys use the expression, "We threw a skunk into the jury box," to describe solicited or unsolicited evidence or opinions overheard by jurors that are otherwise inadmissible.  And, there is a saying about the ineffectiveness of "corrective" instructions as well:  "You cannot unring a bell."

But the statements of B37 raise other questions as well.  During her interview, she was asked, "Did you realize how big this trial had become?"

She responded, "I had no clue, no clue whatsoever."

Yet, as Washington Post columnist Michelle Singletary pointed out, "But look how quickly she and her husband moved to hire a literary agent to shop a book."

Thus, the inevitable question becomes, Was this book on B37's mind for most or all of the trial, and, if so, did it influence her deliberations and discussions with fellow jurors?  After all, it is no secret that in America controversy sells, and, as the protests and outcry that erupted demonstrated, the Zimmerman verdict was indeed controversial.

This, in turn, raises the question about whether Zimmerman was ever in "jeopardy" in the Constitutional sense of the word.  The Fifth Amendment's prohibition against "double jeopardy," prevents the government from trying a person twice for the same offense.  For this amendment to apply, however, jeopardy has to "attach," and jeopardy only attaches to verdicts of acquittal, not to mistrials or hung juries.

Still, as any criminal defense attorney will tell you, hung juries are sometimes just as good as acquittals, because prosecutors might be hesitant to retry criminal defendants if there is little chance for a conviction.

There has been one exception to the double jeopardy rule:  Several years ago in Chicago, a judge accepted a bribe to acquit a Mafia hitman.  Because the hitman had never been in jeopardy in the first place, an appeals court ruled that he could be retried.

Book deals, juror use of inadmissible evidence, and disobedience of court instructions all lead to the question of whether Zimmerman was ever really in jeopardy.  In fact, given B37's statements, it seems the most he ever risked was the prospect of a hung jury.  Therefore, the United States Department of Justice should not just investigate whether Zimmerman can be prosecuted under federal law; it should also investigate whether jury misconduct resulted in Zimmerman's acquittal, and, if so, whether he can be retried under state law.