Drunken US Army project staggers along in 2013 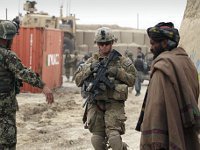 "[US Army] Training and Doctrine Command and Tradoc Intelligence Support Activity should consider conducting an investigation, to determine the true extent of spillage incidents pertetrated by HTS employees and contractors, to preclude possible embarassment in the wake of the Bradley Manning trial/decision." Source

"The training location at HTS has so much politics, manipulation, gossip and unfair treatment that it is sickening." Source

"The DOD should consider conducting an inquiry to determine if there was any improper relationship between the former HTS program director, and the founder of Oberon, later absorbed by CGI, or any other DOD employees. DOD should consider reviewing all awards, bonuses, compensatory time, overtime, or time off approved or endorsed by Mr Y for Ms Z between August 2011 and June 2013. Where there is smoke, there is fire...any disinterested observer will find unusual activity and high amounts of compensation disguised as legitimate work channeled in her direction. More serious allegations are likely to follow."

"Nothing seems to change except the downward spiral of HTS seems to be accelerating." Source

"...they [studies] have been absorbed in a vast database which often renders it nearly impossible to sparse vital from redundant data -- an endemic issue...Most interesting, perhaps, is the change in the products...the volume of reporting has significantly decreased as there seems to have been very few studies conducted since December 2011. Secondly, the standard of the products is remarkably sub-par. Problems can be noted everywhere from the methodology all the way to the final production which, in turn, makes the findings questionable..." Source

According to sources budget cuts will arrive at the US Army's Human Terrain System (HTS) at the end of July 2013.  As is common  in this age of austerity, senior leadership everywhere are figuring out who to keep and who to drop. At HTS the situation is no different. One of the senior staff members at HTS in Fort Leavenworth, Kansas, has sent a must-have list to HTS handlers in Virginia to ensure that the  "new curriculum" will be taught according to specifications.

"This list has the names of the employees who will stay at HTS after the budget cut on July 31st and unfortunately this list has the senior staff member's close friends only. CGI [the prime contractor] is conducting an ethics compliance investigation now against this senior staff member and two faculty members. The  investigation against them  started last week but it has been hidden from the US Army leadership, " said sources.

One focus of the investigation is against a social scientist instructor on the HTS staff who, while employed by HTS, traveled to Turkey for two weeks to speak for the NATO, which is considered a conflict of interest, because she is an HTS instructor and shouldn't work for any other organization at the same time. Instead  of taking leave time during these two weeks of traveling she recorded her hours using HTS code and her supervisor approved it."

The other area of interest is a PhD who was hired to teach Team Leader students. The PhD invited students to his house and "partied" with them. According to a source, the Doctor allegedly "sometimes gets very drunk" with the students "This kind of relationship between faculty and students is considered against CGI's fraternization policy,"  said the source. Sources also allege that a senior staff member "bullies employees---even though they are hard working and dedicated--to reduce their value in front of the government leadership." This makes them easy targets for release during budget cuts. And benefits the senior staff member's friends.

According to a source, these matters involve basic "ethics standards" and-if handled correctly-- could "improve the operation of HTS." The source has praised CGI for its efforts but, apparently, more needs to be done.

One of the Research Managers at HTS, according to sources, is "one of the most qualified instructors in HTS" but a senior staff member and his posse are allegedly trying to undermine the research manager's scope of work. An attempt to merge the Research Managers Individual Track Training class with the Social Scientists Individual Track Training is apparently being made to benefit the senior staff members cronies. "The social scientist instructors can teach this class with the research manager which will allow the senior staff member to keep his two social scientist friends in HTS training," said a source.

Other sources had this to say about the US Army Program.

"BAE should consider conducting an independent inquiry to determine if one of their former employees and a senior military officer provided insider information to CGI-Oberon, insuring they would get the new contract and that the former employee would be hired as a site manager."