60th Anniversary of the start of the Cuban Revolution 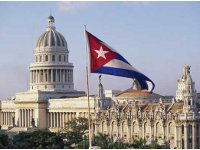 The 60th anniversary of the beginning of the Cuban revolution on 26 July 1953, offers a chance to consider where Fidel Castro drew inspiration and the ideas which prompted his band of guerillas to mount an audacious attack on the Moncado barracks- headquarters of the Cuban military dictator former President Fulguencio Batista, who had seized power in an army coup in 1952.

Fidel studied Law at the University of Havana in 1945 on the advice of those who noted his passion for argument. A world divided ideologically between Capitalism and Communism, stimulated a febrile political atmosphere in University. Two of his earliest University friends belonged to the Communist Youth and Fidel made his first overtly political speech in 1946, criticising the dictatorship of Gerardo Machado, Batista's predecessor.

Fidel was aligned with two main political groupings at university - the Movimiento Socialista Revolucionario (MSR) led by Rolando Masferrer and the Union Insurreccional Revolucionaria (UIR) led by Emilio Trio. This was his revolutionary apprenticeship being refined, where he learned much about the nature of Cuban institutions and how steeped in corruption and violence they were. The two groups quarrelled and jostled for prominence on campus, while outside the corrupt President Ramon Grau San Martin, an American puppet, seized power in 1944 and ensured they were brought under his patronage where they gained a reputation as common guns for hire or pistoleros.

Two of the key historical and political events dominating students at Havana University and influencing their beliefs, ideas and perceptions of Cuba's past and future were the independence struggles of 1868 to 1898 led by Jose Marti; and the revolutionary movement of 1927 to 1933 involving former army officers, students and government officials that had led to the overthrow of Machado. But Fidel recognised that these were incomplete shifts in fundamental power - simply replacing varieties of colonial rulers and corrupt American puppet dictators. Fidel vowed to succeed in creating a truly independent Cuba, a proper self-determining country led by those on the side of the many rather than the few.

In early 1947 Fidel became increasingly politically active openly criticising President Grau  and Batista for their failed leadership and corruption. His political profile was growing and he was seen prominently as a leading mourner at the funeral of the much-respected Communist labour leader Jesus Menendez, who had been shot dead by an army captain in Manzanillo.

In 1948 the Cuban Presidency passed to Carlos Prio, who with the influential army officer Batista, gave unparalleled freedom to the American Mafia who accelerated the degeneration of Cuba into what became widely renowned as America's brothel, where casinos, gambling and gangsterism flourished and the proceeds of organised crime were stashed away from mainland American tax authorities. So Fidel joined in with the university political culture which echoed the adult outside Cuban society of gangsterism and violence.

Fidel was sent with a group from the MSR when he was twenty-one years old to assist in the insurrection in the Dominican Republic, then under the ruthless American-backed dictator Rafael Trujillo. The Cuban insurgents failed and most were arrested but Fidel managed to escape by swimming across the shark-infested waters of the Bay of Nipe to make his way to his father's sugar cane estate. Back at university in Havana, Fidel swapped allegiance to the UIR and was nominated to the Presidency of the University Special Committee on legal affairs.

The pattern of Fidel's journey to later succeed in overthrowing the Batista dictatorship in 1959 was being hardened. Fidel was now by no means an avowed Marxist, he gradually distanced himself from the UIR and had little contact with his Communist friends. He later tells of the influence of Marxist-Leninist ideas and reading a part of Das Kapital, but implies that these were not forming part of any coherent political ideology. What seems to have been of much more significance was to identify with those fellow students and historical Cuban heroes such as Jose Marti, and satiate his appetite for revolution and insurrection.

In 1948 Fidel joined a group of students from different parts of Latin America to stage a protest at the Pan American Conference in Bogota, the capital of Colombia, where America sought to tighten its grip on those countries dependent on and economically and politically controlled by America. The student delegations harassed those attending the conference, with demonstrations, marches and leafleting delegates, attacking American colonialism.

During the frantic atmosphere and growing tensions the Colombian President, Jorge Elicier Gaitan  was shot and killed at a demonstration, enraging the poor majority of Colombians who supported his attempts at liberal social reform. This triggered a wave of riots, violence, killings and bombings in Bogota. The Americans blamed Communist agitators but there is no conclusive evidence they were particularly successful in organising what was in effect an expression of mass outrage against the murder of a much-admired President.

A police inquiry falsely named Fidel as a Communist agent sent to deliberately stir up discontent. Fidel managed to reach the Cuban embassy under Argentinian diplomatic protection and was flown back to Havana on a cargo plane. Fidel drew lessons from these two events, where he participated actively in an insurrection with an intoxicating mix of violent struggle, the actions of massed crowds, and the inspiration of Gaitan's oratory and mesmerising personality.

Fidel was by now immersing himself in student politics and actively supporting the fight for independence in Puerto Rico and demonstrating solidarity with other student movements in Argentina, Venezuela, Colombia and Panama, which were demanding an end to American colonial rule via financed  puppet dictatorships. Eduardo Chibas left the Autentico, the Authentic Revolutionary Party of Cuba, and in 1947 founded the Partido Popular Cubano (PPC- Cuban People's Party) quickly becoming better known as the Ortodoxo party. Fidel joined immediately, finding in Chibas yet another hero  who he followed with great enthusiasm, regarding him as a man of the future destined to pave the way to Cuba's independence.

The Ortodoxo party soon established itself as the first serious opposition to the government, fully adopting the principles and values of the revered Nationalist martyr Jose Marti for Nationalism, Anti-imperialism, Socialism, Economic independence, Political liberty and Social justice. What is striking about this period in Fidel's life is his ability to identify with and follow charismatic male figures who had the capacity and personality to grasp the attention of the masses. Thus his political personality was being melded with his underlying aggressive personality, creating a formidably strong union. Although the attack on the Moncado barracks in 1953 failed, Fidel never lost sight of his goal and six years later in 1959, together with Che Guevara, his brother Raoul Castro and others, succeeded in overthrowing Batista and liberating Cuba.

Author`s name Dmitry Sudakov
*
18:01
Putin: Merkel confirmed Russia made the right decision
15:58
Merkel's remarks about Minsk Agreements were 'petty and disgusting' – Lukashenko
15:02
Viktor Bout says he did not come across Russophobia in US prisons
12:02
Massive fire burns OBI hypermarket at Mega Khimki Shopping Mall to the ground
16:48
US basketball player Brittney Griner exchanged for Russian entrepreneur Viktor Bout
16:31
Zelensky believes Ukraine conflict may end in 2023
20:46
The West is expecting, but not pressing Russia-Ukraine talks
18:27
Putin: The threat of the nuclear war is rising, why deny it
17:17
Ukraine modenises Soviet Tu-141 Strizh drones
15:24
Ukrainian combat drones capable of flying at speed of sound may strike Siberia
Polish writer shocked to find out Russians will not rise to topple Putin