The lesson from Brazil

The lesson from Brazil is clear for all to see and sends out a crystalline message for all governors and governments everywhere: when the people take to the streets, when the people unite, the positions, luxuries and privileges of the politicians are placed in question. The last few weeks in Brazil show a red card for corruption. 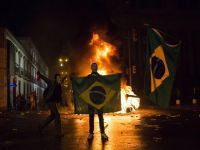 For a start, the massive demonstrations sweeping across Brazil are not about President Dilma Roussef, who would win an election tomorrow. They are, however, about the leeches which gravitate around her political party, the Partido dos Trabalhadores (PT, or Labour Party) in particular and against politicians from other parties in general.

Neither are the demonstrations about hikes in fares on public transportation, although this was the last straw which made a people with the patience of a saint explode in fury on the streets. The distance between the people and the rich and powerful in Brazil, personified by the ruling political class, is massive and growing; while the PT has brought millions of poor people up into the lower middle class it has also impoverished the middle class with the burden of taxation while public services in many areas remain a disgrace.

The result is the majority of the people feel dissatisfied with the way their country is run, the result is spiraling prices, bad public services which force people to spend the little they have on private healthcare plans and private schools, while at the same time rampant and scandalous cases of corruption, which as a rule go unpunished, make people feel their leaders are playing with them.

Add to this equation the fact that the streets and parks and public spaces of Brazil do not belong to the average citizen - they belong to drug addicts; the sense of insecurity in Brazil is tangible - people are terrified to venture out of their electrified and high-walled condominiums for fear of being robbed... and now we have the elements of the equation which explain the demonstrations.

The result of the mass demonstrations bringing over a million people onto the streets in eighty cities across this massive and hugely diversified country was a victory in the short-term - the rise in transportation fares from 3.00 to 3.20 Reais (1.32 USD to 1.41 USD) was revoked in most municipalities and President Dilma promised to invest the income from oil into education. However, there remains far more to be done.

Public services, as a rule, are inefficient - the visitor to Brazil gets a glimpse of this on arrival, where it takes literally hours to get through passport control, manned by officious officials on a power trip. With so many resources producing billions in revenue, why is the primary and secondary education system so poor that families have to send their children to private schools for them to have any chance of entering a public university (conversely, of a far higher standard), meaning also that the children from families without money have less chances than those that have? Why aren't there more places for University students?

With so much money coming from Brazil's enormous wealth of raw materials and natural resources, why is the public health system such a disgrace, forcing people to pay private health plans? Why is the policing so inefficient that the criminals rule the streets and the average citizen is holed up behind barbed wire, as if (s)he is living in a prison?

And why, if there is 28 billion Reais (12,300,000,000 USD - twelve billion, three hundred million USD) for the soccer stadiums to host the World Cup in 2014 (and more billions for the Olympics in 2016), is the burden of taxation so high, why isn't there money to fund these services and why does rampant corruption go unpunished?

True, things are far better than a decade ago, when the PT took over from Fernando Henrique Cardoso's PSDB but until those who govern Brazil get out of their fortified castles, get out onto the street (if they dare) and listen to the people, until they take on the drugs barons who trade in people's happiness, until they cleanse the streets of the filth which makes a living out of stealing people's hard-earned cash to fuel their own disgusting habits, until they address the issues raised above, hopefully, the Brazilians will continue to take to the streets.

The saying "God created Brazil" is so true. Brazil is a first-rate, beautiful country with first-rate natural resources and a first-rate people with a fifth-rate political class (there are, of course, exceptions), unfit to lick the boots of the average citizen.