Today's visit by SKY News to a terrorist weapons factory inside what was claimed to be northern Syria is a telling example of the western modus operandi: bend the rules, breach them openly, use any Machiavellian means to hand to foster the aims of the corporations which control their governments. And their people. 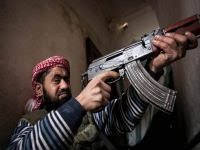 Suppose I were to set up an arms factory somewhere in northern England, let us say a disused factory near some farms, and suppose I were to make Improvised Explosive Devices, home-made bombs and grenades, to be used against the legitimate government of the United Kingdom. Would I be branded a hero, a freedom fighter or a terrorist?

But what to expect from a country whose Prime Minister recently admitted that he would like to see the Syrian rebels winning. Which ones? There are dozens of groups armed and funded by the west, by Saudi Arabia, by Qatar, by al-Qaeda. But it doesn't really matter, does it? Why, the United Kingdom was supporting the LIFG in Libya, a group still on its own list of proscribed terrorist groups.

So the ethical foreign policy one is bullshit. Indeed, how could it be anything else, with the UK keen to gain brownie points by crawling up the anatomy of its master, the USA, at every twist and turn, instead of forging what is really an ethical foreign policy, fostering development over deployment of troops, following international law and not breaking every convention, covenant, agreement or document the UK signs?

What to expect from a country which took part of a FUKUS campaign (France-UK-US) which targeted civilian infrastructures in Libya, such as the water supply and electricity grid? "To break their backs". How nice. What to expect from a country which was obliged to follow the terms of the UNSC Resolution covering no boots on the ground, yet sent in special forces to Libya? What do they wear, slippers?

The answer from the Foreign office? "We do not comment on the special forces". So, they can do what they want, where they want and how, and nobody comments on it so there is no paper trail? How ethical is that?

And now Syria. With FUKUS troops building up in Jordan, does anyone really believe that nonsense about the west not being involved and not supplying weapons to the terrorists? How do they know where their factories are then? Obviously the weaponry is being supplied by unofficial channels, financed by western lackeys Saudi Arabia and Qatar, two monsters in the international community. Perhaps the rumours of what some of their officials get up to in Casablanca should be investigated and outed.

International law states that it is illegal to get involved in the internal affairs and conflicts in a sovereign state. One thing is selling weapons to the legitimate government, another is arming terrorists. But what to expect from a government and a regime which labels terrorists as freedom fighters and openly sides with criminals, torturers, murderers, rapists, looters, arsonists and thieves?