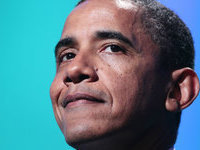 BHO sees himself as a reincarnated JFK. Barack would love to carry on John's foreign policy legacy, but he has a progressive chip on his shoulder that stands in the way. On June 19, 2013 Obama channeled the intellectual background music of Kennedy's world federalist agenda. He did, after all, recite John's famous 1963 call on the citizens of the free world to look "to the day of peace with justice, beyond yourselves and ourselves to all mankind." Unfortunately, Barack apparently stole and then distorted the true meaning of "peace through justice" to advance his own political agenda.

What exactly did JFK mean when he spoke of "peace with justice"?

The concept of a just and lasting peace has historically been advanced by proponents of world federation. In 1949, the United World Federalists, under the leadership of future CIA spook Cord Meyer, Jr., convinced Members of Congress to introduce the world federalist resolution which read:

Resolved by the House of Representatives (the Senate Concurring), That it is the sense of the Congress that it should be the fundamental objective of the United States to support and to strengthen the United Nations and to seek its development into a world federation open to all nations with defined and limited powers adequate to preserve peace and prevent aggression through the enactment, interpretation and enforcement of world law.

Representative Kennedy was one of more than a 100, I repeat, 100, bipartisan co-sponsors of the resolution above. He supported the calling of a world convention under Article 109 of the United Nations Charter to accomplish such a transition as a necessary prerequisite for general and complete disarmament. In John's mind, "peace with justice" was synonymous with "world peace through world law."

For example, in 1960 Senator Kennedy cosponsored a resolution introduced by Senator Joseph Clark designed to strengthen the authority of the UN to prevent war:

Whereas the basic purpose of the foreign policy of the United States is to achieve a just and lasting peace; and

Whereas there can be no such peace without the development of the rule of law in the limited field of war prevention; and

Whereas peace does not rest on law today but on the delicate balance of terror of armed force; and

Whereas the United Nations General Assembly at Its fourteenth session unanimously adopted "the goal of general and complete disarmament under effective international control" and called upon governments "to Make every effort to achieve a constructive solution of this problem"; and

Whereas a just and lasting peace would not be assured even if nations lay down their arms unless international institutions for preventing war were strengthened; and

Whereas the United Nations constitutes an important influence for peace but needs to be strengthened to achieve the rule of law in the world community; and

Whereas the United Nations General Assembly at its tenth session resolved that "a general conference to review the charter shall be held at an appropriate time"; and appointed a "Committee consisting of all the members of the United Nations to consider, in consultation with the Secretary-General, the question of fixing a time and place for the conference, and its organization and procedures"; and

Now, therefore, be It-

Resolved by the Senate (the House of Representatives concurring), That it Is the sense of the Congress that the U.S. position at the next meeting of the Committee on Arrangements for a Conference for the Purpose of Reviewing the Charter should be that the Committee recommends to the United Nations General Assembly that a charter review conference be held not later than December 31, 1962, and that member governments be requested to prepare recommendations and to exchange views with respect to United Nations Charter review and revision In order to facilitate the organization of the said conference and to further the chances of its success.

SEC. 2. The President is hereby requested to initiate high-level studies in the executive branch of the Government to determine what changes should be made in the Charter of the United Nations to promote a just and lasting peace through the development of the rule of law in the limited field of war prevention. The President is further requested to report to the Committee on Foreign Relations of the Senate and the Committee on Foreign Affairs of the House of Representatives, within twelve months after the date of approval to this resolution, the results of such studies.

Notice that the text of the above resolution did not mention freedom, democracy or even social justice as a "peace with justice" ideal. At the time, Western ideology was being advanced by the Atlantic Union idea which called for the creation of a transatlantic union, federal or otherwise. Many members of Congress who supported the world federalist resolution also voted in 1960 to establish a U.S. Citizens Commission on NATO authorized to participate in an Atlantic Convention in 1962 specifically designed to explore the future of Atlantic integration on a political and economic level. Congress and the Eisenhower administration wanted to place freedom first, but President Kennedy advanced the dream of "peace with justice" first.

On September 25th, 1961 Kennedy officially proposed general and completed disarmament along with the necessary structures for an eventual world federation. "To destroy arms, however, is not enough. We must create even as we destroy-creating worldwide law and law enforcement as we outlaw worldwide war and weapons." He was rebuffed by Khrushchev.

With an Atlantic Convention on the horizon, the Soviet Union saw Kennedy's "peace with justice" overture as a fig leaf of American imperialism. European and Atlantic integration, after all, were advanced to halt the expansion of Communism. The Soviets recognized that general and completed disarmament would favor the West. The military/industrial complex, after all, is an unproductive cost in capitalist terms. Why would Khrushchev want to give America an economic reprieve?

After the Atlantic Convention was held in January of 1962, and the Declaration of Paris called for the creation of a "true Atlantic Community," Kennedy shifted his emphasis away from "peace through justice" to the advancement of freedom, democracy and Atlantic economic integration. This emphasis was apparent in his Declaration of Interdependence speech on July 4th, 1962 where he announced that the United States was ready to partner with a united Europe. Such a partnership, he stated, "would serve as a nucleus for the eventual union of all free men-those who are now free and those who are vowing that some day they will be free." The Soviet Union eventually answered him with an October surprise that justified his earlier cry for nuclear disarmament.

Almost a year later, in June of 1963, President Kennedy renewed his call for the advancement of freedom, democracy and "peace with justice" during his "Ich bin ein Berliner" speech. No longer was it politically possible to establish a just and lasting peace through general and completed disarmament under a strengthened UN system alone. Defending and extending freedom and democracy emerged as one of the hallmarks of JFK's foreign policy vision.

Fast forward. What exactly did Obama mean when he recently spoke of advancing "peace with justice?

Reminiscing about the dreams of his political idol, Obama redefined the true meaning of "peace with justice" for his own political interests and thus devalued its historical context. Whereas Kennedy viewed "justice" in terms of world law, Barack suggested that "peace through justice" refers to ending social intolerance, advancing education, science and research, as well as policies designed to reduce economic inequality between individuals and nations. Oh, and by the way, "peace with justice" also means combating global warming. In essence, "peace with justice" now represents the progressive platform Barack believes he has a mandate to advance.

Barack, you're no Jack Kennedy!

On second thought, maybe Barack was indirectly calling for world federation? The "peace through justice" criteria that he defined could, after all, be secured through the establishment of a progressive, economic NATO or UN, federal or otherwise. His views could easily be advanced through the preamble of the 1972 Atlantic Union Resolution which read:

Whereas a more perfect union of the Atlantic community consistent with the United Nations gives promise of strengthening common defenses, while cutting its costs, providing a stable currency for world trade, facilitating commerce of all kinds, enhancing the welfare of the people of the member nations, and increasing their capacity to aid the people of developing nations...

Regardless, Obama must consider the unintended consequences of advancing hollow world order strategies that advance national, rather than international, interests. Kennedy spawned Vietnam advancing "peace through justice," H.W. Bush gave us the First Gulf War in pursuit of a new world order, and W gave us the so-called Global War on Terror. What war will Barack inspire pursuing "peace through justice"?