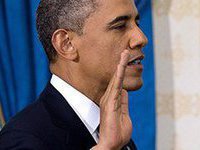 At one time, it seems decades ago now, the general thinking in the USA was that President Barack Obama would jolt the American political system into actually doing something beneficial for its citizens rather than spying on them, building F-35 aircraft, upgrading nuclear weapons, spending trillions of dollars (US) on national security, cutting unemployment benefits/food stamps, fomenting war with Iran, Syria, China and Russia; and dragging out the war in Afghanistan.

Sadly, Barack Obama's legacy will be one of ashes. The destruction of America's social fabric; the implementation of a surveillance corporate-state; assassination and negation of Habeas; and a perpetual state of emergency/war economy will come to dominate the historical narrative on the Obama presidency. President Obama will also go down in US history as the American President who paved the way for the financial industry to dismantle Social Security. With the Executive Powers he has accrued and newly created, future American President's will, by fiat, be able to sell off national park lands and other US assets, even the nation's artwork: citizens of Detroit, Michigan and Greece, Eurozone, are undergoing the pillaging now (see below Greece Memo, Detroit Creditors).

JP Morgan provides the rationale: Constitutions, like many in Europe and the USA in the post-industrial era, are too "socialist" and written at a time when dictatorships flourished. JP Morgan believes that should change for the sake of capital flows (see below: JP Morgan Halfway There).

The US Homeland is in serious need of repair. And it is not just the physical infrastructure that Americans take for granted that needs fixing: roads, runways, sewage systems, water, electricity and the like-it is also the American consciousness both individual and collective that requires revision and regeneration. There's no time for time for nostalgic looks to past days. The good old days were nothing of the sort as the US elite inflicted some pretty severe damage to the American psyche. Just think of legalized racism/segregation and the Vietnam War. Then there were the alterations, whether by groups or individuals, that literally changed the course of US history: the killings of JF Kennedy, ML King, RF Kennedy, Medgar Evers and Malcolm X. Like them or hate them, America has never produced any dynamic leader(s) since that can match their individual and collective standards. And each one of them was "American" to the core.

That said, Americans would do well to look to the protests of the 1960's and early 1970's that would ultimately bring out millions from all levels of society to make their collective voices heard to end a senseless war (Vietnam), stop mindless discrimination (women, minorities), and strike for better wages/benefits (US Postal strike in 1970-Nixon use of executive power controversial).

The time for listening to the blatherskites that hold power has passed.

"The people in power have abused and it is time for a change," said Malcolm X in a blistering oratory, quoting Shakespeare's Hamlet at the Oxford Debate Union in 1964. "If you sit around waiting for those in power to change things, you will be waiting for a long time. In my opinion the young generation of Whites, Blacks, Browns--and whatever else there is-are living in a time of extremism, a time of revolution...And there has to be a change...A better world needs to be built and the only way that is going to happen is by extreme methods...I will join with anyone, I don't care what color you are as long as you want to change the miserable condition that exists on this Earth."

That "miserable condition" will return with vengeance absent opposition from the multitudes.

The Four Horseman of the Apocalypse have arrived: Democrats, Republicans, Liberals and Conservatives are riding roughshod over Americans young and old. They are trampling, with impunity, the US Constitution, Bill of Rights and the ideals within the Declaration of Independence. Their ideologies blind them from seeing the damage they are doing. They speak only to each other through the mainstream media/websites and not to the American people. The citizens of the USA are little more than a compliant audience.

Americans need to respond to this by asking and answering some key questions. How much more low intensity conflict? How many civilian and military suicides are tolerable? How many more mass shootings at home? How many more vapid statements from politicians and military leaders? How many more school closings, furloughs, layoffs? How many more cities like Detroit left to the Hedge Fund and JP Morgan vultures? How much more intrusion by the American corporate-state (one dare not use the "F" word) into the lives of US citizens and millions more around the globe? How many more "big lies" on the economy and security? How much longer is the Cold War going to last (pivot to Asia and missile defense systems ringing Russia/China)? Why so much child poverty which sees Save the Children so active in America?

And just what does it mean to be an American citizen? Is Rahm Emanuel, the current Mayor of Chicago, Illinois, a good example? The same Rahm Emanuel that chose to volunteer with the Israeli Defense Forces during the 1991 Gulf  War instead of with the US Army? What about those USA corporate citizens who pay no taxes and offshore jobs?

So what's the game plan for your struggling city, town, state or region?

How useful would a program like the National Security Agency's PRISM, or TRAPWIRE, be in rounding up those protesting in the USA against austerity, asset sales, pension robbing, child poverty and unemployment?

JP Morgan: The Euro area adjustment--About Halfway There (28 May 2013)

"At the start of the crisis, it was generally assumed that the national legacy problems were economic in nature. But, as the crisis has evolved, it has become apparent that there are deep seated political problems in the periphery, which, in our view, need to change if EMU [Eurozone] is going to function properly in the long run. The political systems in the periphery were established in the aftermath of dictatorship, and were defined by that experience. Constitutions tend to show a strong socialist influence, reflecting the political strength that left wing parties gained after the defeat of fascism. Political systems around the periphery typically display several of the following features: weak executives; weak central states relative to regions; constitutional protection of labor rights; consensus building systems which foster political clientalism; and the right to protest if unwelcome changes are made to the political status quo.

The shortcomings of this political legacy have been revealed by the crisis. Countries around the periphery have only been partially successful in producing fiscal and economic reform agendas, with governments constrained by constitutions (Portugal), powerful regions (Spain), and the rise of populist parties (Italy and Greece). There is a growing recognition of the extent of this problem, both in the core and in the periphery. Change is beginning to take place. Spain took steps to address some of the contradictions of the post-Franco settlement with last year's legislation enabling closer fiscal oversight of the regions. But, outside Spain little has happened thus far...the process of political reform has barely begun."

"The data shows that the gap in incomes and wealth between the rich and the poor in the US shows no signs of significant change, and that the richest 10 and 20% of Americans continue to earn disproportionately high chunks of national income, and own an even higher share of the national wealth...While the average consumer might not be feeling great, the important consumers - the richest 20%, who account, as we've shown, for 58% of income - are in good shape...Finally, the dollar. The perma-bears told us that the current account deficit in the US was too high. It could only be lowered by raising the savings rate of the household sector which in turn would only be accomplished by rising interest rates and/or a dollar collapse. We disagree. To us plutonomists, the current account deficit is largely a function of the savings...rate, which is a function of the propensity to save by the rich. As we highlighted above, they are rationally consuming out of their stock of wealth (which incidentally, keeps going up) as well as from their incomes. To them, dollar devaluations are a mild inconvenience, but not a reason to change their spending and dis-savings habits..."

"The Government [of Greece] will neither propose nor implement measures which may infringe the rules on the free movement of capital. Neither the State nor other public bodies will conclude shareholder agreements with the intention or effect of hindering the free movement of capital or influence the management or control of companies. The Government will neither initiate nor introduce any voting or acquisition caps, and it will not establish any disproportionate and non-justifiable veto rights or any other form of special rights in privatized companies. No further special rights will be introduced in the course of future privatization projects. The Government publishes and updates on a quarterly basis its medium-term staffing plans per department, for the period up to 2015, in line with the rule of 1 recruitment for 5 exits. The recruitment/exit rule applies to the general government as a whole. The staffing plans should be consistent with the target of reducing public employment by 150 thousand in end-2010-end-2015. If necessary, the Government will enact temporary hiring freezes...

15,000 redundant staff will be transferred to the labor reserve in the course of 2012, in connection with the identification of entities or units that are closed or downsized. Staff in the labor reserve will be paid at 60 percent of their basic wage (excluding overtime and other extra payments) for not more than 12 months, after which they will be dismissed. This period of 12 months may be extended up to 24 months for staff close to retirement. Payments to staff while in the labor reserve are considered part of their severance payments....The minimum wages established by the national general collective agreement will be reduced by 22 percent compared to the level of 1 January 2012; for youth (for ages below 25), the wages established by the national collective agreement will be reduced by 32 percent without restrictive conditions. Clauses in the law and in collective agreements which provide for automatic wage increases, including those based on seniority, are suspended..."

"Maximize recoveries for creditors...since the City [Detroit] will not generate sufficient cash to pay all liabilities alternatives have to be considered...restructure governance of pension arrangements, maximize collection of taxes and fees that are levied or imposed, generate value from city assets, wage reductions (implemented through imposition of furlough days), caps/reductions on vacation/holiday pay/overtime/sick days, the reduction of pension multipliers, and changes to healthcare coverage... Prohibits Detroit's local elected officials from exercising any powers as authorized in writing by Mr. Orr [appointed emergency manager] and subject to any conditions he may impose [Orr later reinstated Detroit city's mayor and city council]...The City must reduce employment costs for both represented and unrepresented workers as part of its restructuring...Representatives of the Emergency Manager met with representatives that currently operate the Detroit Institute of Arts (DIA) to discuss the art collection exhibited there... DIA contends that the collection is held by a public trust and cannot be used for any purpose other than exhibition or to maintain and enhance the collection itself...Further dialogue is anticipated..."