Cancer-cola, fries and lies: Taking the power back 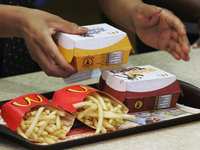 Benetton, Nike, Lacoste and a hundred other brand names, the holy scriptures of the shopping mall. Shop till you drop then shop some more. Burger respite provided, courtesy of 'we clear forests in the Amazon for your delight' and 'we bring you more for less' because 'taste-free is us', 'quality-free is us' and 'trade union free is us'.

"Cancer with your cola, sir?" Is there a choice? Perhaps not if you are in the US where certain colas use syrup derived from crops containing genetically modified organisms. But you won't know it because the GMO industry has spent millions of dollars ensuring that the public remain blissfully ignorant of foods with GMOs. Labelling is out, duplicity is in.

During the 1980s, my hometown was described as the first post-industrial city. It lost much of its industry and it lost it quickly. Unemployment skyrocketed and people were forced to claim welfare. But they had to 'prove' they were 'looking for work' in order to get their unemployment benefits. Looking for work that no longer existed and had been outsourced abroad or lost because of automation.

In the 1960s, the city had undergone a slum clearance programme and had shifted whole neighbourhoods to newly built towns and housing projects beyond the city boundaries. There were already huge tracts of land lying empty as a result. With factories closing down in the 80s, even more land was freed up. Part of this land has now been covered with low density housing and trendy part empty debt-bubble apartment blocks, but large areas have been grassed over and 'landscaped' - the trendy euphemism for windswept urban wasteland.

Today, unemployment remains high and people are still being disciplined to look for jobs that have either long disappeared over the horizon or, in these harsh economic times, are being cut even more under the lie of 'austerity'. Poverty means prosperity and misery equates with happiness. The bankruptcy of thought that says we must mortgage the present for a tomorrow that will never come and hammered home with the time-work discipline mentality of the Industrial Revolution. The devil finds work for idle hands, you know - but not for the idle rich of course.

As if things couldn't get much worse for those thrown on the scrapheap as their jobs were automated or outsourced under yet another lie - 'efficiency' - just about every aspect of society encourages the individual to indulge in an acquisitive materialism whose message is relentless. The thinking is that 'you' - the unemployed, the working classes, the great, great grandchildren of the cannon-fodder 'heroes' sacrificed en masse by the Establishment on the blood-soaked battlefields of countless wars -  must aspire to live like a multi-millionaire footballer, even though you never will or can because we threw you overboard years ago. This was never intended by to be a 'land fit for heroes' of the working class variety (or for their offspring).

What lost opportunities. Those grassed-over wastelands could have been transformed into arable fields worked and owned by local people to feed local people. What a lost opportunity for people to relearn the skills and cottage industries that industrial capitalism stole from local communities. Just imagine self-sufficient communities and localised economies specialising in developing their own wind and solar power, growing their own uncontaminated food using organic methods, making their own clothes and creating their own buildings.

A return to the village, but using modern technology to make life easier. Clean energy powered public transport, modern telecommunications used for the public good and self-education, rather than just used to bolster consumerism via online shopping or to enhance state control of the population.

Self-sufficient communities, not controlled by, reliant on or paying the price for Big Oil, Big Pharma, Big Retail and Big Banking and the destructive meddling and military escapades carried out across the globe on their behalf. Not reliant on those industries that are from Europe to India in the process of colonising the world and stripping away 'the local', traditional agriculture, land rights, human rights, dignity and self sufficiency under yet another lie, this time 'progress'.

But in many of the existing urban wastelands, what we are left with are jobless people who became good free market entrepreneurs by turning to the illegal drugs economy to make a living from supplying their wares to dull the misery of the masses. Heroin conveniently flooded the streets in the 1980s, the whisper is courtesy of our secret spymaster 'saviours', and even now, those good old NATO troops - 'our lads', 'our heroes' - are out in Afghanistan protecting many a banker's god of all things, the financially lucrative poppy.

The outlook is bleak. Many young people in these areas now growing up won't have a job, a job of any meaningful form at least. They will be following in the footsteps of their fathers who did not have a job. Like their fathers, they too will be stigmatised due to no fault of their own. And yet the moribund system's mantra of endless growth based on consumerism and the need to engage in meaningless forms of work that the system demands necessary remains the Holy Grail, which is implicit within every mind-warp commercial, every politician's cynical utterance and every highly-paid mainstream media political commentator's solution for saving the nation.

It is implicit in every bourgeois judgement, innuendo, condemnation and insinuation directed towards a person who does not have a job or does not display the appropriate trappings of conspicuous consumption. To be called a welfare scrounger or loser or waster is to bear the brunt of such a tirade of negative evaluation. Such terms represent a media-fuelled demonisation of sections of the working class who were three decades ago sacrificed on the altar of neo-liberalism. The 'undeserving poor' that hurt the unscrupulous, hypocritical sensibilities of the media and upper classes who have led and supported more unimaginable butchery on the global battlefields of Empire than any number of ordinary folk who have fallen foul of their sanctimonious bleatings about decency and morality.

But there is an alternative and it mirrors environmentalist Barry Commoner once stated aims of substituting green energy for fossil and nuclear fuels, substituting electric motors for the internal combustion engine, substituting organic farming for the chemical variety and using more metal, glass, wood and paper - recyclables, renewables and durables - instead of petrochemical products. And it also involves using land and capital to serve the public good, rather than elite interests.

In the absence of this, what might be the alternative? Perhaps a thousand cities of the damned fromLiverpool to Leipzig blissfully unaware of 'awareness' and all sleepwalking to what could already be the genetically programmed Mac-mantra: "Fries with your cola, sir?"