Russia: Is this Homophobia? 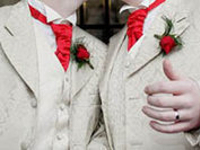 Interesting isn't it, we have a term [like anti-Semitism] which is used emotively to deter discussion on an issue? We'll, I'm not politically correctly and never intend to be, so I have some comments on the subject.

I read recently that Russia was passing a law to prohibit the propaganda around homosexuality and the promotion of abnormal sexual activity associated with Sodomy.  Quite correctly, Russia has identified that there is a perversion of the press towards the popularisation of this activity and the linking of it to human rights - sponsored of course by the queer lead UN. What was interesting to note, is that the item has been let "slip under the radar" so as not to raise the awareness of the subject - while the queer brigade continue their assault on the normal masses.

Anyone with half a brain can sit back and identify the underlying current involved in this perversion of society.  There is a group in this world, who are about the destruction of all Christian values - the very values which whether clearly identified or not, form the basis of all of our civilized societies. [For this I would also include Islam as true Islam is a belief in divine guidance and as such, the rules for their society are also based on "God values" - a higher being, other than the rights of humans].  This evil, shadowy group is about the destruction of civilisation and the enslavement of mankind to Satin.  Oh, already I can hear the detractors, the ones out there who are already in the power of Satin and prepared to do His work.  The first lie that they would want you to believe is that there is no Satin, in the first place; but failing that, surely he isn't trying to steal creation? [And the Serpent said to Eve, surely you will not die"].  Those of you who are beguiled by such false statements are unfortunately bound to wake up in  a very hot place. This group, has as it's most ardent supporters, the UN; who under the guise of humanitarian works, missions and human rights, actively tries to reduce civilisations that are devine based, to ones that are UN based.

Look at all UN directives and you will see the removal of God, from all of them - this is the first step in the reduction of a society; to destroy the base fibre of the society and render it susceptible to cleaver manipulation. All of mankind exhibits a need to believe in a superior being; the most primitive societies, ancients and the like, all have a deity that they created to fulfil a hole; an aching in their souls. Those in the world who have God as their deity are under attack by the UN as they want to remove God and when that is achieved, they can substitute Satan as the deity. A blind man can see that happening!

Under the UN sponsorship of human rights, the homosexual brigade are blessed with the same rights as normal people - we are required to accept homosexuality as a normal activity. The rationale behind this eludes me - if sodomy was normal, the human race would die out in three generations as procreation would not be achieved.  I did see that somewhere it was stated that because homosexuality occurred in 10% of the population, then it was a "normal" event! Hell, what twisted logic - cancer occurs in 45% of the population, do we regard that as normal - bloody hell we do - we aggressively treat for it and promote alternative lifestyle changes to reduce the incidence of cancer.  Why twist and construe that homosexuality is normal?

The UN is aided in their dark agenda by an ever supportive media - [mainly run by the same group as is behind the UN]. In the media, disproportionate coverage is given to queer activities and events; we even have euphuisms for being queer - they call it "Gay".  Friends, there is nothing gay about being abnormal! The media portray queer as a fun thing, they trivialise it's nature and promote activities associated with it as being something that youth may well enjoy. [Try this lolly sonny, you may like it].

Man cannot change what God has ordained! Regardless of how we want to be in control of our lives, God has already pre-determined the outcome and established His law. All this nonsense about human rights is simply an attack on God's Law.

Russia, and Vladimir Putin, have rightly discerned this evil; Putin has said that he will protect Christian around the globe and it seems like he is the only world leader who is willing to stand up to the evil of the world; the dark forces trying to steal creation. By saying that any foreigners who sponsor queer acts, promote it and the like, will be deported - Russia has taken a stand against the permeating evil of the West [interestingly, Islamic states have noted this for years and have been vilified in Western press because of their stand against the Western lead evil].  Since the fall of the Berlin Wall, Russia [old CCCP], has been flooded by the evil of the West; all under the guise of slogans - free trade, open market, capitalism, human rights et al. Western conglomerates have infested Russia - the likes of Coke Cola, MacDonalds etc and are poisoning the Russian people - turning them into a society of fat, unhealthy, sedentary peoples. The push to allow buggery is just another example of the destruction of the Russian culture. The West destroyed the USSR, now to destroy the people.

By identifying that this push to normalise buggery is emanating from "out-side" Russia; Russia has made the firsts tentative steps in controlling it's own destiny and returning to the authority of God's Law.

What is important to understand here is that the homosexual is not to be despised - [I can count as friends, those who are homosexual] they are a sinner just the same as the rest of us; we are required to understand what God's law is and to point out what is against it.  By the same token, we point out that murder is against God's Law, theft, bearing false witness, adultery [although the UN and others have almost watered down this one already] - we are quite content to uphold God's law when it suits us and society, but very quick to dismiss it when we can see a way of justifying it to ourselves. In this, the queer brigade and the UN are very quick to help.

The homosexual, because of his sin, is no different to a person who habitually continues an adulterous relationship - both are wrong, both are sins. But as Christians, we are not to put a stumbling block on front of our brother so that he stumbles [we are our brother's keeper]. Making homosexuality easier to practice; making it "normal" is doing just that, we are providing a stumbling block for the sinner.  Rather we should be pointing out that it is a sin and with Christian love, assisting our brother towards God's will.  This is what Russia is doing with the introduction of this law. Russia will be the great power of the future as the West falls into corruption and judgement from God.