May 9, Victory Day (Dyen' Pobedy) marking the end of the Great Patriotic War (World War 2), celebrating the heroic victory of the forces of the Union of Soviet Socialist Republics over Fascism, freeing millions of people from the yoke of madness and hatred. 68 years on, let us not forget the lessons of May 9. 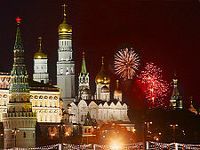 The first great lesson is that the Great Patriotic War saw a coming together of forces to defeat a common evil: Fascism, along with xenophobia, racism, hatred, intolerance, homophobia and marginalization of religions and social groups. Despite bearing the brunt of the ferocious Nazi attack, feeling the full force of the armies of Nazi Germany and the other countries whose armed forces joined the Fascists in their demonic quest (let us not forget the horrific register of the Baltic States in terms of concentration camps), the USSR stood firm.

The Soviet Union was then an ally of western countries which would later turn against her and try to destroy the social model which concentrated on joint ownership of resources by all, not control by a few, which concentrated on the sharing of wealth and created a meritocratic society providing social mobility and full public services, including housing and full employment and in coming together, they ensured that good triumphed over evil.

The second great lesson is that former foes can become friends. Nobody today (in their right mind) blames modern-day Germany for what happened from 1933 to 1945 (indeed the conditions for the rise of Hitler have their origins in the peace settlement and economic setting after the First World War) and while Russia's allies in World War Two turned against her during the Cold War, when the Soviet Union dissolved voluntarily (as catered for under the Soviet Constitution), today the West and the former Soviet Bloc have far more in common in terms of common values than differences.

The Soviet Union lost 26 million souls fighting a tremendously determined and well-equipped military machine, the Wehrmacht - and in celebrating May 9, we pay respect to this horrific yet heroic human sacrifice for the good of the rest of the world. We also pay respect to those common human values which have brought former foes together, celebrated today by Germans, Russians, Poles, Romanians, Americans, French, British, Italians...Africans, Latin Americans, Australians, Indians, Chinese, to name a few.

We celebrate the victory of humankind over intolerance, over racism, over sexism, over homophobia, over mass murder, over torture, over marginalization of social groups. Yet as we do so, let us not forget that these very evils are today perpetrated by members of the international community which do not respect international law and which perpetrate outrages against every page of the book of diplomacy, invading countries illegally, breaching UNSC resolutions, murdering civilians, committing war crimes, setting up concentration camps, sodomizing and torturing prisoners.

Did the Soviet Union give up 26 million lives for the French, British and Americans to side with terrorists in their imperialistic venture in Libya, in the setting up of concentration camps and torture chambers in Guantanamo Bay and in Iraq? And today these very nations continue to side with terrorists in Syria, another country they have destroyed.

It seems that after 68 years of celebrating Dyen' Pobedy, there is still so much to do. Let the perpetrators of today's evils hold their heads in shame, for what is the difference between what the Wehrmacht did (we are not speaking of Nazi Germany but rather, military interventionism) and what the FUKUS Axis (France, UK, US) is doing in today's world?