Every morning at four o'clock, I get up from bed, before starting university, to fulfill, with as much patience and perseverance as I can bring to life, the task I have assigned myself. I feel obligated to let the world know about the suffering of ordinary people where I live, here in Gaza. Recently, on a beautiful day, I was given the opportunity to meet the wife and children of one of Gaza's martyrs. 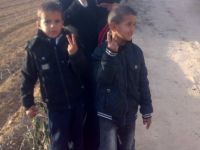 I phoned her beforehand to get her permission. I was concerned she might not want to see anybody, but it turned out to be quite the opposite. With a friendly smile, she welcomed me to her humble home. As I sat down beside her, I said: "I am Rana, and I am here to tell the world your story and to describe how you live after the ugly crime you witnessed. I will also do what I can to share your message."

At that moment, her little son, crawling on his belly, came towards me. I hugged him and kissed his head. For a moment, I forgot everything and played with the child, his mother joking with me, saying "you can take him with you." The little boy's name is Ghaith and he is nine months old. This sweet little child will never share his childhood with his father. He will never bask in his father's love and affection. All of this was stolen from him.

After I had been playing with the child for a few minutes, the mother, twenty-seven years old, began to tell her story. I just listened, letting her words flow.

Her husband was on vacation from work. Each morning during this time he would visit his mother. On one of these days, back home after seeing his mother, he stood outside picking tangerines for his older son Anas, who was barely three years of age. "Drones were everywhere," said the woman. Her husband phoned a friend, telling him to come over and collect some money that he was owed. The friend stopped by. As he was leaving, the drones spewed their deadly fire.

The woman fell silent for a few seconds, then added: "I heard the missile, but I didn't think it had such a strong impact." But when she went out to see where the rocket had struck she was horrified to see her husband laying on the ground, their son in his lap. Frantically, she started calling her husband's name: "Mahmoud! Mahmoud! Mahmoud!"

There was no reply. Mahmoud was no longer alive and Anas was crying out in pain. "I held him and screamed for someone to help me." Some men rushed to the scene and took the boy and his mother to the hospital. Mahmoud's friend was also killed in the attack.

While we were talking, her third son, Moa'ath, returning from Kindergarten, ran toward his mother to tell her what happened at school that day. At five years old, he is the eldest child.

"Because of what he witnessed, he suffers from trauma and distress. He shouts day and night," the mother said.

As she was grieving over her child's pain, she collapsed into a burst of tears, unable to control herself any longer. I tried to comfort her, but it felt like an almost impossible task. Still hoping to calm mother and son, I asked Moa'ath what his dreams are for the future. "I want to be in the military", he said. "I want to avenge my father and my brother." With childish innocence, he added: "Before, Israel was good, but now they're not anymore. They are criminals and I don't love them."

In my previous article, "Child Victims of Israeli Violence," I mentioned Anas's injuries as among the most serious of Israel's gruesome attack on Gaza. The child, who is still in Intensive Care, had an operation to repair twenty-five perforations in his intestines. Ten days later, he was transferred to a hospital abroad, where he underwent a six hour operation to remove any remaining shrapnel fragments. Anas has one more operation ahead of him. Though his condition is still serious, it is stable.

As I wrapped up my interview, the mother expressed her gratitude to God. She called upon God to help her to raise her three children, Moa'ath, Anas, and Ghaith. I asked her one final question: "If you could send one message to the world, what would it be?" With a strong voice, she replied: "I only wish that Israel gets duly punished for all these cruel crimes."

The woman's story is but one among many that illustrates the consequences of Israel's violent behavior and human rights violations toward the people of Gaza.

Nevertheless, in Gaza, the human spirit desperately grabs hold of determination and self-sacrifice, attempting to deal with the challenge of waiting for sunrise through all the terror-filled hours of darkness. Together, we stand in the river of hope, transformed and transforming, laughing, crying, yet grounded and buoyed by courage and an unfathomable and amazing grace.

As we experience the incomprehensibility of Israeli aggression, we never forget that as our struggle aims to resist and to break the power of Zionist hegemony, our efforts are really about regaining our rights and, ultimately, about obtaining peace.