So, the Arab League openly takes a page out of NATO's book and proposes to break international law by taking sides in an internal conflict in a sovereign state, Syria. The Arab League leaders probably do not notice it in their haste to lick the boots of the western masters who have always kicked their people, but we do. Read on... 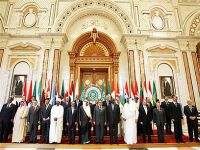 The Arab League is supposed to protect the interests of the Arab people, and how telling that it has turned against Syria, one of its founding member states in 1945. Starting out as an organization which desired to "draw closer the relations between member States and co-ordinate collaboration between them, to safeguard their independence and sovereignty, and to consider in a general way the affairs and interests of the Arab countries" the Arab League today is NATO's Gulf Cooperation Council.

Therefore it comes as no surprise whatsoever that in its 24th Summit, in Doha, Qatar, the hotbed of cooperation with the USA and its NATO poodle states, the Arab League agreed that its members have the right to furnish all means, including military means, to the Syrian armed groups, according to their individual will. This includes the terrorist organizations carrying out armed insurrection against the legitimate government forces of a sovereign state. Illegal? Totally.

But then again, where was Qatar and its Arab league friends when the USA and its NATO poodles were slaughtering Libyan children, strafing the Gaddafi grandchildren because they were considered as legitimate war targets? Where was the Arab League when the west, its bedpals, was strafing the Libyan electricity and water supply to "break the backs" of the population, to leave mothers without milk for their babies?

Where was the Arab League when NATO was destroying Iraqi infrastructures with military hardware? Where was the Arab League when the USA was torturing illegally held citizens in concentration camps in Iraq and elsewhere, torturing them, murdering them, setting dogs on them, forcing Moslems to eat pork, sodomizing them, urinating in their food and getting American females to humiliate Moslem males?

Maybe then they will understand, when their people rise up against them, the flames fanned and fuelled by their western masters who ride them like donkeys, that they should have stood together and should have upheld international law, instead of allowing themselves to do the work of the USA and its poodle states like cowards.

But then again, they could always act like Bahrain and carry out the most horrendous acts of human rights abuses against protesters while their western masters stand back and turn the other cheek. After all, the Arab League is what, if not a tool to implement the policies of the historic enemies of the Arab people?

Al-Qathafi was right. But then again he was the only Man among them, he and Al-Assad.