So Cyprus is the latest Euro-disaster-Zone country to bite the dust and receive the poisoned chalice of a Troika bailout, meaning the country's economy is ruined for the foreseeable future. There are therefore a few questions the Cypriots should ask their new Troika masters... 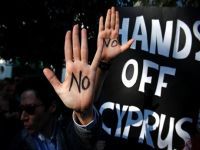 The Troika is composed by financial whiz-kids from the International Monetary Fund, the European Central Bank and the European Union who as a rule do not have a clue as to the reality in the field of the country which to all intents and purposes they are now going to rule, by dictating measures to a government whose policies it sees as having failed.

Why are they stealing Russian deposits?

So let the people of Cyprus ask a few questions during the coming days. For a start, what are the consequences of the deal? Rumor has it that up to 40% will be levied on deposits over 100,000 Euro, which, doing the math, means that the deposits of Russians will foot the bills. If Russian deposits are worth 20 billion Euro and a levy of 40% is imposed, then that adds up, practically, to the 10 billion Euro deal Cyprus' banking sector needs. If the Russians foot the bill, then why weren't they involved in the bailout talks?

Why should the citizens foot the bill?

Another question to be placed to the Troika is why should the people foot the bill when they always did everything that was asked of them? They studied, they worked, they obeyed the laws and the response is to take their money away from them in a pick-pocket approach to financial mismanagement. Even if the average citizen with savings of lower than 100,000 Euro will not be directly affected by the bailout conditions, the Cypriots will very soon start to feel the consequences.

These are that the Troika will start imposing draconian conditions to stifle the economy, take money out of circulation, raising taxes and imposing measures top-down which will cause rampant unemployment and massive public spending cuts. Banks will stop lending, the economy will stagnate. Don't believe it? OK then read the page entitled Portugal.

Is the EU a disaster or a catastrophe?

The idea was originally to create a tariff-free space for countries to interact in peace. Maastricht, Nice and Lisbon changed all that in a decade of stupidity and euphoria in which a whole generation of second-rate politicians went too far, too fast, allowing themselves to get caught up in a wheel of autocratic Eurocratic top-down high-handedness.

The result is the supranational Eurostate infested with the political equivalent of bubonic plague devoid of any measures against contagion. Why were Cyprus' banks exposed to the Greek contagion and why did nobody take measures to protect the deposit-holders?

Why is the EU so undemocratic?

The European Union did not grow naturally from the desires of its citizens. It was a project which was imposed in most cases without asking questions and when the citizens of one or another country dared to say NO!, then the vote was repeated ad nauseam with a cynical manipulation of the wording, perhaps on a bank holiday in summertime, until the NO's gave up. Did anyone ask the people if they wanted the Euro? Did anyone explain the consequences? No, because even today they say the consequences are unknown.

What about the executive class flights to Africa?

Whoops, better not ask that question... but er.... who pays for these?