On the eve of the Papal conclave, I was talking to a close acquaintance who basically grew up in the Catholic Church.  Not a regular church goer, however, she fondly remembers regular church attendance in the "good old days" with a true reverence for the history and traditions of the Church. 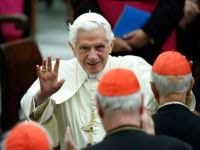 Her parents didn't attend church until an incident occurred, as these things usually do come out when children are with their friends.

Walking down the street with her friend, she noticed a strange man approaching.  She asked her friend, "Who is that man in a dress?"

How embarrassing for mother and father.  Next thing she knew, she was in Catholic school and the family was attending church.  Funny how that happens.

There is probably nothing more beautiful and awe inspiring than hearing the Latin Gregorian chant in any form it takes, especially when done by children.  She recalled memories of fasting breakfast every morning in order to receive Communion at the morning Mass which the school children eagerly sang completely in Latin.  It was a beautiful experience, and the school children eagerly devoured the donuts and chocolate milk served to them when the Mass was over.

There was First Communion, Confirmation and frequent use of the little white first Communion dress for special church events when the pupils would make processions in that special attire.  On Friday, there was abstaining from eating meat.  It was a sin to eat meat on Friday in the days of old.  Prayers and catechism questions were memorized by heart.  There was the special nervous feeling of the Priest opening up the sliding door in the Confessional so that the pupil could tell the Priest their tiny little venial sins like coverting their neighbor's play money, getting angry at the teacher or something of that nature.

Then there were the infamous Nuns who are basically remembered for their fury, making those bad children who had the nerve to do so at school, place their chewing gum on their noses.  Or the rap on the knuckles with a ruler for other terrible infractions, such as talking out of turn with one's neighbor when one is supposed to be attentive to the classroom teacher.

It was a rich experience that was shattered by Vatican II, which was followed by deep change in the Mass as Catholics knew it then.  They started with the folksy guitar masses, these and all Masses being done in the native language instead of the traditional Latin.  The entire structure of the Mass seemed to change so that one could hardly imagine that it was "Catholic" anymore.  It felt more "Protestant" as she would say.  The hand shaking sign of peace felt strange and intrusive, as opposed to the very personal feelings one had previously as a Mass attendee.  Not that there is anything wrong with a symbolic gesture of peace, but it made her ill at ease and she felt it out of place under the circumstances.

That is when she parted ways and stopped being a regular church goer.  She didn't leave the church, the church had left her.

After that, there was experimentation with other religions, but basically the values instilled by many years of Catholic education had made their mark.

As a new Pope is being chosen, those brought up with the old time traditional values can only hope that perhaps instead of more change, the Church might return to its history and traditions...keeping what has always been accepted doctrine within the Church.  Most people are familiar with that...against abortion, no married priests or female priests, etc.  There are always rabble rousers that want to throw out the doctrines and traditions of the Church, but fortunately most of it remains to the satisfaction of the Church body.  You just cannot throw out instilled values and traditions...

The Church on Earth is made up of human beings who are far from perfect, given their sin nature.  One other belief of the Church is that man has a sin nature they are born with.  That being the case, it might be well to briefly discuss the problem with pedophile Priests.  Reputable, knowledgeable psychologists will tell you that pedophiles basically cannot be cured or changed.  Put in situations with children, they will always be offenders.

Some of these people have been attracted to the opportunities provided by the priesthood, but in no way are these mentally sick individuals an indication of what the priesthood should entail.  They have been an embarrassment, of course.  But in no way do they diminish those that really have this great calling and it should not be allowed to be accepted as any sort of trademark or inclination. It is sin and sickness, bottom line.

You have individuals in youth programs that take leadership positions in order to be close to victim children, yet you do not hear far ranging criticism of these organizations and their leaders.  Nor should it be made a general criticism of the Church, who accepts candidates in good faith for the priesthood.

God only knows how rare the people are who are willing to make the necessary sacrifices that are part of the priesthood.

The Church and everything that constitutes its essence is something that is always a part of one's internal makeup and values.

Hopefully, the new Pope will make great strides in returning to and keeping to tradition and history...in particular the enforcement of the Latin Mass once again.  That is her great hope.  It also seems that having an Italian chosen might feel more comfortable as well, as a rather time honored tradition.  A little bit of pride, a little bit of nostalgia and a lot of hope will be generated by the upcoming Papal enclave.