America, the land of the free – whatever! 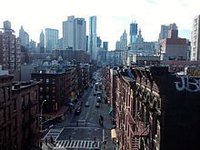 I was flicking through some News items and came across a small piece, seemingly innocuous. "We Saw a Drone", says pilot above NY City. Initial reaction is - so what? And then the questions started to flow.

So what was a drone doing over the skies in New York? It appears that Alitalia Flight 60U from Rome to NY was at 500 metres and 8 kilometres Southeast of John F Kennedy airport on final approach to Runway 31 when it came within 66 metres of an unmanned craft. Now, that is a close encounter! The incident was recorded at 1:15pm on Monday 4th March and reported to the FAA.

The air traffic between aircraft and control tower has been monitored and released by website LiveATC.net and they record it verbatim as:

"We saw a drone, a drone aircraft."

The pilots later described the drone to the FBI as black, about 1 metre wide [was that body or wingspan?] and having four propellers.

The FBI and FAA have issued statements saying that they are looking for a remote controlled model plane - "anyone with information about the unmanned aircraft or the operator to contact us" FBI agent Giacalone said in a statement.

I wonder if the pilots considered it a model airplane or a drone? Do you suppose, that the pilots would have a fairly good understanding of the difference? So why report a drone and latter look for a model plane?

Now that the DHS are planning on [and] using drones as well as the Pentagons players, how do you suppose we ensure passenger safety in the air? The FAA are tasked with ensuring passenger safety so are we to assume that the DHS and military are going to submit flight plans before operations and that they are going to abide by air traffic controllers?? Forgive me my cynicism!

The DHS have purchased drones [as well as their recent purchase of light tanks - relax, the tanks are for your protection], that have the facility to identify if you are carrying a firearm or not. What they can't do, is confirm if you have a permit to carry or you are a Joe Bloggs criminal/terrorist. So this process has nothing to do with your protection against a gun toting criminal or ensuring that you are not a terrorist masquerading as an American citizen and carrying an illegal weapon -  it can't identify that, so what is it's purpose? The ability to identify if you are carrying is purely so that you can be identified as a rioter or potential "trouble maker" who is opposed to the NWO/Obamma decrees and they can either kill you then or track you. Forget about any "collateral damage" - incidental deaths of other civilians in the vicinity when they engage you -  are accepted under the premise that the ends justify the means.  Your bad luck if the guy next to you is carrying!

The whole purpose of the purchase of drones, tanks, stockpiling ammunition, purchasing thousands of weapons, stocks of MRE, a myriad of restrictive pieces of legislation and the very formation of an elite terrorist group called the DHS, is solely in preparation for rioting in America - turning America into Battlefield America. [read my other article - America is Under Attack].

If you cannot see this, if you fail to accept the obvious, then really, you deserve what is coming.

The drones are so that some faceless, nameless coward can sit in an air conditioned room, hundreds of miles away and kill you any time of the day or night, any place.  This is how the DHS will instil terror among the people, how they will kill and control a large force, with just a few.

There is a basic human right that a man is entitled to a defence. We're referring to a legal defence here in a court, not specifically the right to defend one's self; that is a right that has been seriously eroded. [In New Zealand for example, a man is not allowed to use a weapon in his defence -  an octogenarian cannot use a firearm to defence himself against a drug crazed 20 year old. If he does, he will be charged and have to defend himself against what charges are laid, in court]. Drones execute without trial and often without proper identification. Are you prepared to be killed without trial - what about the abolishment of the death penalty in most states - guess that doesn't apply to the DHS??!  You are identified and convicted as a trouble maker/domestic terrorist based on whatever flimsy evidence that they can dig up against you. Oh dear - sounds like the McCarthy era all over again. This time it won't be dob in a Red, but dob in your neighbourhood terrorist.

Are you sufficiently incensed? Are you now upset - well, good, for you should be? But consider the poor people of Pakistan, who have for years now suffered the constant sound of drones in the air [now for them, it is as natural as the song of birds] and who suffer murder by a foreign government that does not recognise human rights or International Law - except when they want to apply it.

America, the land of the free - whatever!