The Venezuelan President Hugo Chávez, 58, passed away on Tuesday afternoon after a two-year battle with cancer and a severe respiratory infection. The news was announced in Caracas by Vice-President Nicolas Maduro, who was named by Chávez as the one he preferred to succeed him in the event of his death. 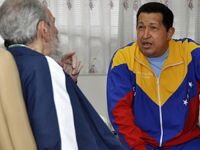 Nicolas Maduro speaks of a moment of great pain at the passing away of Hugo Chávez, but for the great revolutionary leader it is a moment of relief from an intolerable situation. President since 1999, when he surfed a wave of popular euphoria against the Fascist policies of Venezuela's oligarchy, Hugo Chávez has systematically implemented socially progressive policies, despite facing the opposition of the vested interests of those who oppose him.

Re-elected in a free and fair democratic election last November to his fourth term in office, Chávez pledged to further improve the lives of his people but his influence swept across Latin America. The father of "oil diplomacy", he understood the strategic value of Venezuela's huge mineral wealth and forged strong relations with Cuba, Brazil, Argentina, urging his continent to pull together and form strong trading ties, while at the same time, now on a world stage, his was a strong voice against the imperialist policies of the USA and its NATO poodles. Despite this he insisted on making cheap oil available for poorer families in the USA and offered help after Katrina.

In foreign policy, Hugo Chávez did much to place Venezuela as an intercontinental player, creating strong links with the upcoming economies, preparing the foundations for what will certainly become an enlarged BRIC group, to include countries such as the Islamic Republic of Iran and Indonesia, alongside Brazil, Russia, India and the PR China. This fight for a multi-polar world was a battle which continues as the main legacy of Hugo Chávez and this is the fight that his followers shall continue.

His new vision for world governance included plans to expand the UN Security Council to include more countries from all regions of our planet; a new policy of transparency with more effective methods of crisis management; the suppression of the anti-democratic veto at the UNSC; the strengthening of the powers of the Secretary-General of the UNO - a re-founding of the UNO with powers which are adequate to handle the issues of today's world.

At home, the policies of Hugo Chávez were democratic and socially progressive, and were based upon the legitimacy of genuinely free and fair elections and the support of the majority of his people. He created a new middle class in Venezuela, a country which was caught in a medieval regime ruled by a corrupt oligarchic clique of elitists. His main successes at home were in the areas of healthcare and education, in just 12 years. Consultations are provided for free, medicines are distributed free, 24 hours a day, to the people of Venezuela in the Barrio Adentro programme. The Mercals (state-subsidised grocery stores) provide staple products for reduced prices, making foodstuffs available for all.

The effects of his education programme will be visible for decades to come. As he believed, an educated people can create their own welfare conditions. Hugo Chávez will be missed for his courage, honesty and frontality, as he fought for what is right against entrenched and selfish interests which pander to the whims of the few who control the world's resources. A visionary like Fidel, Hugo Chávez is freed from his intolerable discomfort but his star and its message will shine forever, lighting the night sky, proof that Heaven has gained an angel.