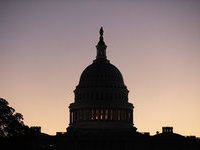 On March 1, $85 billion in automatic sequestered cuts are scheduled. Congress may or may permit them. Obama calls instituting them dire. On February 19, he said.

"(They) won't help the economy, won't create jobs, will visit hardship on a whole lot of people."

He spent four years benefitting bankers, war profiteers, other corporate favorites, and super-rich elites. He did so at the expense of middle America. Others most disadvantaged suffered more. His administration prioritizes austerity. He wants America's social contract destroyed. Straightaway in office he demanded it. He hasn't changed his mind. He plays hardball. He wants Republicans blamed for bad policies he supports. They caused enormous harm to millions. He's got much more in mind. He pretends otherwise. Read his policies, not his lips. His record reveals rogue leadership. He's mindless of human suffering. He wrecked America's economy. Poverty, unemployment, homelessness, and hunger increased on his watch. The worst is yet to come.

Vital social programs are on the chopping block. Incremental eroding is planned. Medicare, Medicaid, Social Security, food stamps, and other vital ones are targeted. Bipartisan agreement assures it. March 1 is a nominal deadline. March 27 matters more. It's when America runs out of money. It's when debt ceiling limit is reached. US law requires Congress authorize borrowing amounts to fund federal programs.

Doing it means raising the ceiling by late March or sooner. Expect it. It's automatic. Details will be finalized along the way. On February 22, the Wall Street Journal headlined "Lengthy Impasse Looms on Cuts," saying:

Republicans and Democrats expect "spending cuts will take effect next week and won't be quickly reversed, likely leading to protracted political uncertainty that presents risks both to Congress and" Obama. Averting or replacing them with long-term deficit reduction isn't expected. Negotiations aren't underway. On February 18, Congress recessed until February 25.

Each side blames the other. Blame game politics is standard practice. No wonder polls show public congressional support near record lows. Numbers range from 9% to low double digits. Obama and congressional Democrats look beyond March 1.

"Their strategy is to persuade the public that the cuts would harm defense, education and other programs, make air travel difficult and cost jobs, among other effects," said the Journal. "They hope public pressure would force Republicans to reverse course and agree to new tax revenue."

They believe "protracted fight(ing) over spending cuts could take a toll on Republicans....If that impression takes hold, (it) could cause trouble for" GOP candidates in 2014. "Republicans believe they can stay united by accusing Mr. Obama of campaigning rather than negotiating and reminding people that they have backed legislation to replace the cuts to defense programs with nondefense cuts."

"They say they won't bend to Mr. Obama's demand for new tax revenue and that the public supports their goal of reducing the deficit." Both sides remain confident. Agreement in principle occurred long ago. Policies belie rhetoric. Details alone remained unresolved. Expect them in the fullness of time. When remains to be seen. Sequester chicken is risky. People may not react as expected. Both sides may be harmed. Obama has political leverage. His popularity way exceeds Congress. Mindless Americans must explain why. He caused enormous harm to millions. He's got much more in mind. Thoughtless constituents don't get it. They support what demands condemnation.

Republicans also play hardball. Speaker Boehner's spokesman, Brendan Buck, said no one "on our side is squirming. We feel like we're on very strong ground." House Majority Leader Eric Cantor's spokesman, Rory Cooper, said there won't "be a moment when we break and give (in to) a second tax increase. There will be no compromise on tax hikes."

Republicans said the same thing last time. They did so before last year's January 1 deadline. They said one thing and did another. Soon we'll know what both sides intend this time. On February 24, the Journal headlined "Fresh Front in Budget Battle." Back room doubledealing continues. Both sides "are quietly considering a deal to avert a government shutdown....but at the cost of prolonging across-the-board spending cuts." Attention shifts from March 1 to what follows. By March 27, Congress must pass a continuing resolution. Doing so is required to fund government operations. Failure assures shutdown. Few expect it. If it happens, it won't last long.

Senior Boehner and Senate Majority Leader Harry Reid aides are "discussing a bill being prepared by House Republicans to fund government operations through September." Republicans want lower level funding. They want defense largely untouched. An unnamed White House official said Obama won't go along. Democrats are worried. They believe failure to do so leaves them vulnerable to be blamed for shutting down government. An unnamed Senate leadership aide said: "There's an emerging consensus that it would be a difficult battle to have. I don't think we could force a shutdown."

A senior GOP aide said House Republicans will likely "consider" a continuing resolution days after March 1. Most House and Senate Republicans support it. It's not clear if or when compromise can be reached. Failure assures automatic sequester cuts. Both sides prefer instituting them gradually. Agreement remains unresolved. On Sunday, federal Controller Daniel Werfel's report briefed governors. They're in Washington for their winter National Governors Association meeting.

Budget cuts will hit states hard, it said. Economic growth will be harmed. Teachers will lose jobs. Funds to help victims of domestic violence will be lost. Pentagon employees will be furloughed. National parks will party or fully close. Obama hopes scaremongering will force Republican concessions. Expect chicken politics to continue all week into March. We've seen it all before. Both sides jockey for advantage. Markets so far are indifferent. Unresolved differences remain. Expect grand bargain betrayal to follow. It's baked in the cake. Ordinary people will be hit hardest. Deficit red ink will keep rising exponentially. Over $1 trillion adds to it annually. Congressional toing and froing changes nothing. Real fiscal cliff issues remain unresolved. They go unmentioned. Bond markets have final say. Central bankers and finance ministers can't control them. They'll decide when excess went too far. Bond investors are getting skittish.

Rising rates are the flip side of lower prices. It's automatic. The lower the price, the higher the rate. Financing costs rise with it. Everyone pays more. It happened before. Expect it again. What goes around comes around. Bad policies assure it. Sentiment drives markets. Excess turns them negative. It happens eventually. This time isn't different. Expect the unexpected. Both parties share blame. Sequester is self-destructive austerity. It's bad economics. It's counterproductive politics. Troubled voters blame politicians for inflicting harm. Obama's teflon coating may wear thin. He's not the only villain in town. He's got lots of company. They say one thing and do another.

They support austerity when stimulus is needed. They want America's social contract destroyed. Safety net protection is old-fashioned, they believe. Wrecking the economy doesn't matter. Protecting bankers, war profiteers, other corporate favorites, and America's super-rich count most. Attention deficit-hyperactivity disorder (ADHD) is a national affliction. Paul Craig Roberts calls thinking America's "national disability." Both reflect two sides of the same coin. Indifference compounds it. Republicans and Democrats exploit them for maximum advantage. Ordinary people lose out in the process. Grand bargain betrayal targets them. Expect unprecedented cuts to inflict enormous harm. It doesn't matter if they're incremental or sooner. They're coming in the fullness of time. Cumulatively they'll hit hard. The worst of all possible worlds is planned. Both sides agree. Essential social services ordinary people rely on most are targeted for elimination.

Shared sacrifice is one way. Demagogic doublespeak conceals it. Media scoundrels ignore it. Party leaders planned things months ago. The criminal class in Washington is bipartisan. It's worse now than before. Populism's a dead letter. Huge stakes are greater than ever. Details remain to be worked out. Fear-mongering urges public support. Popular needs aren't considered. The world's richest country doesn't give a damn. Monied interests control Obama. They own him. He's beholden to what they want. A pound of flesh isn't enough. They want it all. Obama salutes and obeys. So do congressional leaders. Predatory capitalism failed. Revolution is the only solution. America's "national disability" checks it. Corrupt politicians take full advantage. They scam ordinary people for their own benefit. Grand bargain betrayal is policy. It's not a matter of if. It's when it hits hardest. It's coming. Expect it. Obama bears full responsibility. He's a world class scoundrel. He menaces humanity multiple ways. He's America's worst president. Impeaching him is a national imperative. Hopefully it'll happen in time.