The history book will smile at Pope Benedict XVI as one of the greatest Popes in the annals of the Roman Catholic Church, a Pope who fully understood the implications of his actions and the time setting which dictated them. Let us drop the conspiracy theories and an intellectualization of a question which is as simple as it is practical. 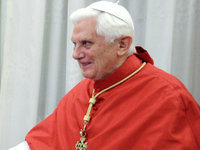 Those who wish to make money out of selling off fractions of the Moon, those who wish to write articles linking the Pope to the Illuminati, some faceless secret club wielding untold powers, will do so, just like those who like to tell us that "they" are poisoning us with chemtrails will do so. However, like the "birthers" in the run-up to the last Presidential election in the USA, they will all be branded as kooks, nutjobs, wannabes or else just lightweight punks using their own lack of gravitas and ineptitude as tools to make a frantic attempt to be noticed. At the end of the day, they will garner as much kudos as, and even less respect than, the drunken village idiot bawling raucous obscenities on a Friday night.

What matters with the resignation of Pope Benedict XVI is not contrived drivel and unadulterated nonsense but an honest approach to what is, after all, a perfectly simple and practical question. The theoreticians make the mistake of trying to impose their pompous verbosity on a humble and straightforward decision, claiming that as Father of the Roman Catholic Church, Benedict cannot renounce Fatherhood.

However, as Benedict himself said yesterday in Saint Peter's Square, Rome, in his final public address, the Church belongs not to him nor to anyone, but to God, and God's will would be what?

First and foremost, the evangelization of the Church, taking the message of Christ to the four corners of the Earth, as Christ Himself said, is the fundamental and prime objective of any Pope, along with the regulation of the Church through the Curia (the bureaucracy of the Vatican). Understanding that the limitations of his age made it impossible to do his routine administrative job, performing his functions as Head of State and to go globe-trotting at the same time, Benedict XVI reflected and asked for God's guidance.

How many younger men, half his age, see their hair turn gray after just a few years in office? Understanding that to be Pope in 2013 is a totally different reality from being Pope in 1953, when it sufficed to walk the corridors of the Vatican giving orders, understanding that the Pope today is a media man, ever-present in photo-journals, framed by the sweetest smiles as he holds a child, catchy soundbites and glossy gimmicks, Benedict XVI gave a lesson in political lucidity. He understood that it is to a certain extent seen as a razzmatazz job in a globalized world in which growing numbers of youngsters are flocking to the very churches doing the job Benedict is unable to do: the evangelical churches.

But then again, would there have been a John Paul II without Cardinal Josef Ratzinger?

Benedict XVI has been a power in the Vatican for many years. He knew when to step forward, insisting that those guilty of crimes should not be protected by Canon Law, weathering the storm which many Institutions pass through from time to time, through no fault of their own but rather due to the weakness of Humankind, and then he knew when to step back and pass the evangelization of the Church to a pair of younger hands.

With simplicity, with humility, with dignity, the epitaph of Pope Benedict XVI, whose legacy is the continuation of the dialogue with, and respect for, other Churches and a lifestyle which includes honesty, simplicity, humility and dignity - basic Christian values, at its very centre.