The Vatican - The favourite

The Italian Cardinal of the Archdiocese of Milan is the leading contender to be the new Pope - The list of names to follow Benedict XVI has other representatives from Europe, Africa, Canada, the United States and also in Latin America - among them, the Brazilian Odilo Pedro Scherer, archbishop of São Paulo. 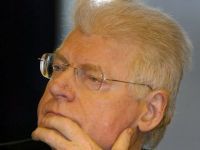 Although there are no official prerequisites for being a candidate, for more than 600 years the College of cardinals has elected a new Pope from within. Currently, there are 119 cardinal electors with less than 80 years of age and who can vote.

During the transition period, those who manage the Church's College of Cardinals, especially in the figure of the  one responsible for the goods of the Vatican City. It is the Secretary of State, the "number two" of the Vatican, currently Italian Cardinal Tarcisio Bertone.

By proximity to the pope, Bertone is a natural candidate to succeed Benedict XVI, although at this point he is not the favorite. His function involves large political and diplomatic authority and therefore he knows the workings of the Vatican.

Bertone belongs to the religious congregation of Salesians of Don Bosco (SDB), one of the most successful nowadays, known in Brazil for its performance in education. However, most of the cardinals do not see Bertone as a good administrator, much less a good "pastor." Some mismanagement scandal and the recent leak of secret Vatican documents, which became known as "VatiLeaks" weakened its image. He certainly will receive votes in the conclave, but as for an eventual election to the papacy, Bertone would be a surprise, since his name divides more than unites.

The favorite is Angelo Scola, from the Archdiocese of Milan, one of Italy's most important clerics, he is an expert in theological anthropology and very aligned to Benedict XVI, which is seen as a quality. Both are Catholic thinkers. Scola is more outgoing and charismatic than Ratzinger.

He is highly acclaimed in Milan and is therefore accustomed to crowds. His fans say that Scola mixes the confidence of John Paul II to Benedict XVI's intelligentsia. He is 71 years old which gives him extensive experience as administrator, signaling that his pontificate would last up to 20 years - it would be longer than that of Benedict XVI, Pope for only seven years. However, it is precisely the age that can take votes from Scola: some cardinals want a longer papacy.

Scola is also against the fact that he has never held a position in the Vatican and, moreover, represents the second consecutive pontificate of intense theological teachings, which could be considered excessive. His Italian nationality also weighs, as some cardinals believe it is necessary to renew, choosing someone different, maybe even outside Europe.

The Brazilian Odilo Pedro Scherer, Archbishop of Sao Paulo, is not considered a favorite, but his election would not be a surprise also. Scherer heads the most important archdiocese of Brazil - the largest Catholic country in the world - and one of the largest in Latin America. This gives it great visibility and pastoral experience. The Brazilian cardinal also has extensive experience in Rome, where he worked and studied for seven years. Another quality to be noticed by the cardinals is the fact Scherer dialogues with different movements, from the more traditionalist groups such as Opus Dei and the Focolare, even the younger ones, such as the Catholic Charismatic Renewal (CCR), social and pastoral. He could be a consensus candidate, aligning European and Latin American traditionals and moderates.

In 2012, Scherer said he could not imagine the possibility of being pope. "Only one Pope is elected and there are so many to choose from! It is the conclave that decides, not someone who proposes or that says 'I want to be Pope' or 'vote for me, I'll be Pope,'" explained Cardinal Scherer, who added: "Something else crosses my mind besides being archbishop of Sao Paulo."

Observers often say that although Brazilians are seen in Rome as friendly men, they are not firm enough for the papacy. Another question to be raised is whether the conclave considers that Scherer has responded to the growth in Brazil of evangelical churches and to the strengthening of atheism in Brazil. Being of German family can also be a hindrance, because, for some, he represents the second "German" Pope in a row. With 63 years of age, one would expect a long pontificate.

Speaking of Latin America, the Argentine Cardinal Leonardo Sandri is a favorite because he works in the Vatican as prefect of the Congregation for the Oriental Churches, was Deputy Secretary of State between 2000 and 2007 and is seen as a good administrator. For some, it would be the ideal person to restore order in the Roman curia, lost during the administration of Bertone. Pope Benedict XVI was a theologian and professor more than administrator, analysts say in the Vatican.

Another advantage is the fact Sandri is of an Italian family, but born in Argentina, a developing country. He therefore has one foot in tradition and the other in the future. Theologically, he is aligned to the teaching of the Church and as a good diplomat, is moderate in political issues.

However, Sandri can have his picture "contaminated" by the management mistakes that he participated in as Deputy Secretary of State. In addition, his current position is not of great prominence and some believe he would be a great Secretary of State, instead of Bertone, and not a Pope. Another weakness of the Argentine is the lack of pastoral experience or as diocesan bishop.

Another leading contender for the papacy in America is the Honduran Oscar Andrés Rodríguez Maradiaga, Archbishop of Tegucigalpa, who stands out for being a charismatic person and as easy communicator. Some call him "Latin American John Paul II". He is currently president of Caritas Internationalis, the most notable and recognized charity of the Catholic world. Salesian like Bertone, Maradiaga lived in Rome and Turin.

His reputation was partly tarnished, however, in that he had earlier supported the military coup against former Honduran President Manuel Zelaya in June 2009, during which international diplomacy mobilized. Another weakness is that Maradiaga, a bishop ordained at only 35 years of age, had little pastoral experience as a priest.

Anyway, the profile of the elected pope should signal what is the direction the Cardinals want to give the Catholic Church in the coming years. They should assess at least five main aspects in choosing the new pontiff: age, which helps to estimate how long should the pontificate be; pastoral experience and theological fidelity to the teaching of the Church, or administrative experience as governor - having been bishop of a large diocese can be a quality; political experience, to mediate conflicts and relate with authorities in other countries; charisma, because the Pope has to deal with crowds and know how to communicate.