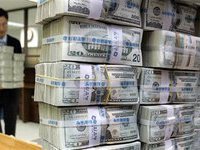 It is necessary for me to paraphrase much of what I have so it may seem rather "short on detail' , but if you wanted any more information/detail, I'd be happy to provide it.

Firstly, money has no intrinsic value; and really, neither has Gold as it is a controlled market. The American Federal Reserve {FED} have been printing monopoly money for 75 years and there is no backing to this currently  - other than people's "faith" in the dollar.  It has been a  contrived financial system based on the Petro-Dollar and a debit based economy. Karl Marx said 'war is inherent in Capitalism".  This is because  capitalism needs to expand , based on debt driven greed and waste, in order to survive. There comes a time when this "bubble" cannot be sustained - rather like blowing a large soapy bubble; it grows and grows until a point whereby the surface tension cannot sustain it's continued expansion. Then it bursts. The American economy is such a bubble - already America cannot ever hope to repay it's debt.  The way out of this conundrum, is to devalue the dollar - let it free fall. Then countries like China, Japan etc who are holding huge amounts of American debt will effectively be holding useless paper money.  The FED, after seizing what real value is in the country  by way of foreclosing on mortgages, loans and collection of  businesses etc, will simply print a new currency.  Ala Germany with the Deutschmark and the new Reichsmark. Depressions are generated to redistribute wealth.  Take from the middle class and poor and give to the 10% of the wealthy.

America has been heading along this path of controlled devaluation since the middle of last year - the FED stated in December that the dollar needed to drop 33 1/3rd % . The issue here is, a controlled devaluation is a fairytale; external forces and other markets will cause a run which cannot be anticipated or controlled.  Japan is onto this and they have been printing money [like the FED has] and effectively devaluing their Yen in unison with the US Dollar. This has caused the FED to complain strongly - but there is little that they  can do about it - China and Japan have already begin trading each other's currency [So too, Russia and China] rather than using the Dollar as the unit of trade, further weakening the position of the US Dollar.

However, a collapse of the US dollar will cause major problems for the countries that are holding huge amounts of American debt - China and Japan especially as both of these counties have supported their balance sheets with US debt. Wipe of that debt and they are bankrupt! This will trigger worldwide depression as the two major industrial powerhouses of the world cannot pay for goods.

Switzerland and Germany have requested their gold be returned from Fort Knox - world markets and countries around the world are becoming very nervous. Switzerland would be regarded as one of the cagiest financial counties in the world - why now demand their gold back? The FED refused a German audit of German gold reserves being held by the FED - why??

Speaking with business partners I have in the States, they are not "alarmists or kooks', but they are alarmed and very concerned over current events. The establishment of the Department of Homeland Security [DHS] is a major concern to many in America. THE DHS are not trained police, they are not trained military, they are people who have been "especially vetted" as to their loyalty to the flag [government]. The DHS has recently placed an order for a further 450 million 10mm Hollow Point ammunition bringing their "stockpile" to almost a thousand million. [what's that? A Billion in Yankee talk?]. There are approximately 300 million citizens in America - the question being asked is "what does the DHS need a billion rounds of ammunition for?".  Further, my partner asked me to provide them with Meals Ready to Eat [MRE - military style ration]. When I asked him why they haven't got any in the US - his answer was that the DHS has been buying them up. Again, people are asking "why does the DHS need MRE, and in such high numbers?".

The answer put forward to these questions is quite logical. With a depression of the scale that is planned, the government cannot rely on the loyalty of the Police, after all, they will have their Super schemes wiped out, their saving gone and their families will be in the same boat as the rest of the middle class. Hardly conducive to loyalty! The Army will fair no better - perhaps worse as many who have been recently fighting a war on behalf of the FED [controlled government], will see the stupidity and pointlessness of their sacrifices. Because of that, it is important that the US return it's troops from Afghanistan and reduce the size of it's standing army so that there is less of a threat from an organised armed group. That leaves the trusty and loyal DHS to protect what the "haves" have and keep the have not from getting it.  A frightening scenario.

With money being worthless, there is no point whatsoever in having a bank account - in fact, the more money you have in the bank, the better the governments will like you. So easy to reduce wealth with a stroke of the pen and a closing of the banks doors.

The only hedge against the possible coming gloom is to store tradable.  Food [long term storage food] and commodities that people need are what current money should be invested in.  This 'investment" is better than money in the bank. Consider the rate of inflation and check out the rate of inflation of food! It will not get cheaper and will hold it's value. What was $1 in current currency will be worth say $50 in any new currency. It will still be worth more than paper value and it is a necessity! Other things that can be stored and traded are certainly worth considering and investing in - especially medicines which will become very hard to procure.

Now, if the worst does not come to pass - what's the problem? The items stored are not spoilt and can be used progressively in lieu of spending money for them later. It is in effect a form of compulsory saving and a hedge against inflation - you will earn more than leaving the money in the bank. Consider also, that shares are a very risky investment in the current market - companies go tits up just like everyone else. Holding shares in a bankrupt company doesn't sound like a great deal.

Personally, I think that the planned time frame for this devaluation is the demobbing of the large standing army [returned troops from Afghanistan], but with current world unrest, events may precipitate a collapse quicker than the FED are planning it.

My free and honest advice is, prepare for a depression and if it doesn't come, you haven't lost anything - rather you have made a wise investment.