The Vatican and Illuminati 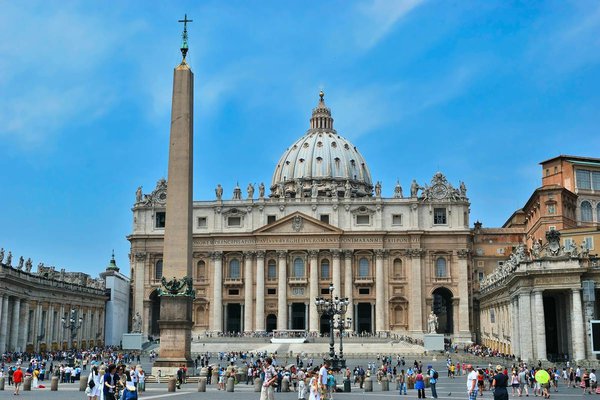 Last night a lightning stroke a dome in the city of the Vatican. Was it a plot of HAARP program or a sign of an angry sky? Of course it could be considered as a sign of the Illuminati, one day after the pope's resignation, which has despaired many of the traditionalist Catholics who believed in him as their last chance.It looks like an episode of Dan Brown's sagas involving secret societies, conspiracies, the opus Dei and the prophecies of Malachy, who predicted the pope's resignation and a final crisis in the already chaotic history of the Catholic Church. Are the days of Armageddon finally near, especially after the Maya deception of 2012?

Mainstream Catholics actually do not differ from modern submitted crowds. They accept anything, just fearing not being politically correct and they live "en accord avec l'esprit des temps". They go sometimes to church; they accept the sacraments but don't give a damn about the future of the faith and European Christianity. If the next pope is an African, in conformity with the mainstream media will, and if he asks Europe to accept one hundred million more Africans, these Christians will be happy to submit and to accept their destruction and submersion. Who would take the risk of being labelled a racist?

Now the French traditionalist Catholics are on their own to fight against the homosexual adoption of children in France. The clergy in France did nothing to help them, as usual. They have gathered a crowd of one million people in Paris, at the Champ de Mars, they have asked their signatures to half a million people, and it is of course useless. In a democracy a mass movement is always unconsidered, especially if it wants to defend and illustrate an ethical and Christian point of view; there may be one country in which the Christian point of view is still working and it is paradoxically Russia. Chesterton used purposely the word of orthodoxy to defend the ideals of Christianity that were already doomed at the beginning of last century. Science and libertarianism, anti-religious bias and global indifference (especially from the catholic crowds) have accelerated a process in which western tradition is itself separated from the corpus of society. Christians now are a minority barely tolerated in France. You can be Muslim, atheist, pagan, Jew, agnostic, polytheist, anything but Christian: I mean you can be a Christian if you are not a Christian; it is Orwellian Catholicism.

Yesterday in Paris a commando of naked and tattooed girls came to swear, scream and profane the church of Notre-Dame and nobody dared to stop them; they were of course filmed by a greedy and luxurious camera. This is not the first time it occurs, but once more there was no reaction, I mean no physical or juridical reaction. The catholic crowd is not prepared to fight or to die for its ideals and the conservative politicians who attend its votes either. So the anti-Christian show can go on. We are not in Russia.

The balance of Benedict XVI (the number of the disaster in the tarots) will have been pitiful in terms of image or projects. The media that at least respected his predecessor's charisma (he had "won the crowd") will have humiliated him with whatever they wanted: condoms, paedophilia or holocaust-denying scandals before purely forgetting and neglecting him. The pope, how many divisions? They know that new flocks are not worth the former ones. So they don't fear them.

May be it is too late to be a catholic of tradition now, may be the Catholic Church is ready for a new agenda, involving ultimate progress, technologies (Twitter, you remember?), innovations and some Illuminati stuff! Benedict had already hired as counsellors infamous Wolfowitz or Peter Sutherland, so, one generation after the shame of Ambrosiano bank, the show can go on...

Yet I consider this resignation to occur at the worst moment for the Catholics who defend in France two thousand years of Christianity. But may be the catholic crowd expects calmly to be round up in its catholic park. According to another prophecy attributed to Malraux , the twenty-first century would be spiritual or wouldn't be; it may be spiritual, but underwater. And I can make my own prediction; the Orthodox Church of Russia must be ready to be the next church of Christians. In France and elsewhere.