Reactionary, heinous hotheads in service to the powerful 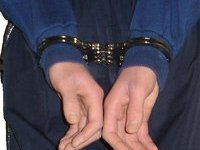 In general the American police are uneducated, unintelligent, inarticulate, intolerant, brutal, trigger-happy, illiberal, compassionless, violent, criminal, vigilant, carping, captious, arrogant, contumelious, institutionally-paranoid, officious, authoritarian, uptight, inhibited, Puritanical, nasty, temperamental, petty, vindictive, bewildered, conformist, discontent, boisterous, confused, and homogenous. "They're all the same," is the frequent complaint. Forget about Torquemada, the Marquis de Sade, Vlad the Impaler, Alba, Hitler, and Nero: The American police are the meanest pricks on the face of the planet! Shakespeare wrote that "the phrase would be more germane to the matter, if we could carry cannon by our sides." The police are one of the greatest obstacles to the enjoyment by Americans of their rights under the law of the land-the Constitution and its amendments, especially the vaunted Bill of Rights (the first ten amendments to the Constitution), though unless somehow enforced it is not worth the paper it is printed on. If each otherwise powerless American could carry cannon by his side, in a metaphorical sense, then maybe the Bill would mean something.

Consider the supposed "right" to peaceably assemble and call on the government to address the people's grievances-part of the First Amendment. The fuzz has a long history of beaking up peaceful assemblies of and demonstrations by the people that they were ordered to break up or broke up because they found the activity "un-American," "subversive," objectionable, extremist, alien, deviant and loathsome. As labor-employer clashes grew in the 19th century, the police, militia (national guard or army reserve), and private corps of thugs like the Pinkertons were employed economically and politically against the workers.

The corporate press made much of Haymarket, but not of the swines discharging their aggression with clubs, tear gas, guns, their fists and sometimes even dynamite and machine guns, in the Colorado mining wars of the late 19th century, in the railroad strike of 1877, during the great upheaval of the 1880s in the Homestead strike, in the Pullman strike, at Republic Steel, Chicago, 1937, at the Democratic National Convention, Chicago, 1968, and elsewhere at different times. Steinbeck's The Grapes of Wrath is full of police goons beating workers, immigrants and immigrant workers, ideas that were based on what the author had observed in California in the 1930s. (Ironically, should the police themselves go on strike, such as famously happened with the Boston police in 1919, when Massachusetts Governor Calvin Coolidge smashed the labor stoppage with the aid of the state guard, they are met with the same ruthless tactics.) The system crushes the poor, and rich men rule the system.

Fortified with his Oxford-man-like police academy education-and relying on the internal affairs department to be nothing more than window dressing intended to head off serious supervision of the police, it being that the police do not police their fellow police-the policeman brutally charges forth with a chip on his shoulder and the intention of busting, literally and figuratively, anyone who shows resistant "attitude" toward his woeful excess of authority. The African-Americans call him "The Man," whites a "cop" (the term is from the metal, copper, since in the 19th century the police used to wear a copper badge and copper helmet), but both often say he is a "prick," and hence believe that that obscenity best describes the police's pitiless and munificent distribution of costly, nonprorated fines and citations, and their frank love of physical aggression, such as shoving, pushing, punching, bending arms, clubbing and mindlessly preparing the hapless American endowed with the glorious and unenforced "Bill of Rights" for the brutish "cuffing" (handcuffing), the police subsequently charging him with everything he can think of, including "resisting arrest."

Meanwhile, the prosecutors and their staff take as the word of God, and never do anything to verify, serious criminal charges made by the coppers in their police reports, which are part of their "civil-like" attempt, as they see it, to bring "law and order" to a violent society through the application of homeopathic doses of vitriolic violence. That is, the prosecutors proceed to prosecute "criminals" for misdemeanors and felonies, whether they are in fact guilty or not; the fact that any given person arrested and charged with a crime by the police may be innocent is completely beside the point. Nothing is done, prior to bringing the plenary resources of the state against the poor, to make certain that the policeman or the two or three policemen in question are not lying-yet lie they do, and with relish, abandon and complete absence of moral scruples.

The poor are mindlessly railroaded by persons devoid of compassion. The prosecutors only go back to police for an interview and further evidence if the "defendant" challenges the criminal charges, in court, and thus the prosecutor's actions involve not verifying the accuracy of police statements but looking for everything that would damn the "defendant" and ignoring exculpatory evidence, and coaching the police as to their upcoming court testimony. Any American who does not believe these assertions ought to conduct a little experiment to see for himself: Go through the past issues of the newspaper of record for a given county to determine the number of cases where a policeman was prosecuted for a crime. Here the "watchdog media" is a crucial factor, since when the media call attention to a crime committed by the police, the prosecutor's office sometimes feels the heat and sometimes acts.

However, that scenario is rather rare. As for a policeman being indicted for a crime on the basis of the complaint of an irritated "defendant"-well, it simply does not happen. The prosecution of a policeman for anything is as rare as a Kennedy or Rockefeller family donation to charity! But in reality, the police routinely commit the crimes of homicide, manslaughter, armed criminal action, assault and battery, illegal arrest, subornation of perjury, falsification of a police report, obstruction of justice, larceny, drug abuse, drunk driving, breaking and entering-and just plain being a mean prick full of authority hubris who constantly barks out at you the order "keep your hands out of your pockets!" For example, there is a cop named Aaron Roediger, to be found in the Midwestern American city St. Louis, in the state of Missouri, a psychotic, violent, truculent belligerent widely recognized as one of the meanest men in America. The American policeman insensibly regards the preservation of peace, order and private property to be his foremost task, in the process annihilating the rights of the very people he is supposed to be serving. Property above people is the reality; people before property is the refrain of progressive critics.

The police referred to here, thus far, are mainly the local county or municipal police; when one examines the state police, mainly the state troopers, and the federal "police"-such as the FBI, the ATF, the DEA, Treasury agents, border patrol agents, INS agents, the Coast Guard, the military police (MP's) and the investigative units of the four branches of the military, CIA dicks illegally operating domestically, and what have you-as well, the picture becomes more complex. The least objectionable of the American police might be the state troopers. I am not, of course, saying that there are no exceptions, or that all American police are as described above. There are exceptions, and I have met enough "nice cops," so to speak, to encourage the belief that when dealing with them you should keep a positive attitude and not fear that they will unleash their worst. For example, it is a courtesy when a policeman who has nailed you and pulled you over for not signaling, or for having a nonfunctioning headlight, then lets you go without a fine and with just "have a nice day."

Obviously, the police are not exactly getting rich at what they do for a living, and the work is fraught with danger to say the least. In this regard, it would be interesting to hear what they have to say on the current intensified issue of gun control; undoubtedly the police favor keeping guns out of the hands of criminals, but apparently, despite all their on-the-job authority, they do not have much political influence-atleast not in the issue of gun control. Nevertheless, such "nice cop" exceptions simply make the rule that the American police are a major source of injustice and crime against the American people. A comparison with European police is instructive-with the Bobbies, gendarmes, Polizei, and so forth. First, the police of Europe do not usually pack heat while on patrol, and neither do they ordinarily need to. Second, the fines attached to citations from the police are prorated according to one's ability to pay, and thus do not impose such a crushing burden on the poor as in the U.S. Third, daily life in Europe is not nearly as violent and chaotic as that in America, so much less often is it a constant battle of worker against worker, would-be class comrades at each other's throats. Fourth, and finally, the police of Europe, like Europeans in general, are not the products of a disintegrating degenerate culture full of monstrous paradox and contradiction.

According to American conservatives, what the world need fear most is socialism and communism. But consider that Marx predicted that capitalism would be overthrown because capitalist society would be increasingly polarized into two classes, the ruling class and the proletariat, while the middle class would disappear, with increasing class conflict due to ever-greater inequality. Therefore, assuming both of them are correct (American conservatives and Marxist prognostication), then the answer to the world's problems, and to the problem of warfare between the police and the American people in particular, would appear to lie in greater equality as a corrective against the growth of communism and socialism, again assuming that the two are undesirable.

Yet the disappearance of the middle class is precisely what is happening in the world, with reference to the deep economic recession, exportation of American jobs to cheap-labor countries ("globalization"), continual corporate downsizing and laying-off of employees, approximately eight-percent unemployment, the refusal of American politicians to prime the pump and spend federal money to stimulate the economy (something that no institution in the entire world other than the American federal government can do so well), skyrocketing CEO and corporate-board-member self-pay and the shrinking pay of middle-class functionaries and workers. All this is leading to the destruction of the middle class in the U.S. and elsewhere. It being that American and British conservatism are as different as night and day, there are actually British conservatives who advocate a classless society (assuredly they are not Marxists)-something the American conservative is ideologically bound to refuse to do. Which way America? I will only add that it is always a matter of greater or lesser equality with any nation, regarding the future, solving problems (e.g., police injustice), and, perhaps, finding salvation. But of course, if you cannot commit to greater equality, there is always the same old dreary status quo of a huge gap between the rich and poor in the U.S.

Fleming is the author of the book Word Power, which can be purchased through Amazon.com.