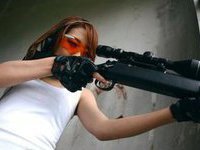 From abroad I must note that when I was last in America I could see the increasingly authoritarian executive branch paying careless disregard to their oath to uphold the Constitution. Thus I am hardly surprised that President Obama, who seems to have to problem arming American soldiers to interfere with the sovereignty of other nations, has decided to again extend executive power, this time to ban and register firearms. The question is whether he's doing this out of care for protecting schools or something else.

Recently there was a tragedy involving a young man killing many school children at Sandy Hook Elementary School, in New Town, Connecticut. This has been used as the so-called 'final straw' requiring unprecedented intervention from the federal government, and explicitly the administrative branch. The strange thing is though, Connecticut itself already had similar laws to the ones prposed including and assault weapons ban. If it didn't work in Connecticut why is the administration proposing it for the whole nation? The chief of police in Newtown was indeed shocked by the firepower the 20 year assailant was packing, but if he didn't obtain it under the laws of Connecticut, how is making it illegal elsewhere going to help?

Criminals and Crazy people will always find a way to create violence; in lieu of assault rifles certainly they'll take up fertilizer and coffee grinders to create bombs as terrorists groups in nations with strict gun laws already have. Yet there's no public outcry to ban gardening. Something else must be compelling Obama, following in the steps of Hitler prior to his seize of power, to go after firearms specifically, and the US amendment that was specifically intended to allow the people to resist the government in an armed struggle by founders who felt that another revolution could one day be necessary. Perhaps Obama isn't worried at all about schools, perhaps he smells revolution in the air.

For those who haven't been following American news; the people are not happy. Two movements have emerged, the so-call Tea Party, and the Occupy movement. The Tea Party movement has held major rallies in cities across America gaining massive support but with relatively no interference by the government. The Occupy movements, seeking to directly protest the financial centers where grievances against the American people have not been addressed and continue unabated, have seen what can only be described as regular abuse of authority by the police; while America accuses other nations, like Russia, of taking a tough line on protests, when it comes to blocking traffic on Wall Street America puts it's boot down hard.

The two groups largely disagree on what should be done but they do agree on one point: The people in power neither care about their issues, nor is the current government capable of addressing their concerns; that may not yet be revolutionary talk but it's getting close to revolutionary thinking. As Obama soon goes to his inauguration, a multi-million dollar event with everything one would expect to need for a rap album release party, he doesn't go with a majority of the people. American voter turn out has been abysmal for years and Americans go to polls far less than other first world countries. Knowing he lacks the support of a majority of the country, enjoying only the support of those not so disappointed with the system that they bother, and that two growing movements identify Federal Government as the problem; maybe we can see why Obama might be concerned with guns. With revolution in the air the most logical thing for an increasingly dictatorial leader to do is to dispense with laws designed to allow for revolution when the government fails to do its job.

As further evidence I'll again point out; the Obama administration has no real problem with assault weapons. Obama himself is surrounded by them every day at public appearances, and every soldier sent abroad is armed with them. Further his administration arms rebels in attacks on governments it doesn't like. Finally a recent program from the administration involved selling assault weapons to drug dealers on the border of Mexico and the United States (resulting already in numerous casualties in America, and in Mexico) in was can only be described as an inept attempt to track drug dealers. (Maybe they should try giving away Improved Explosives to terrorists next?). Certainly the administration doesn't worry about whether assault weapons proliferate they are worried about who has access to them, and knows where they live.

Americans should be taking heed that the administration has a very different plan for America than it says it has abroad. Continually America has been funding revolutions, armed and political, abroad, and arming rebels in many instances. Meanwhile at home the humorously undemocratic two party system is making sure such a revolution cannot take place in America regardless of the will of the people. With the American military already conducting training to put down an uprising within America, and the administration targeting the Second Amendment, the reason is clear; America's elite career politicians are worried. They're not doing the will of the people, the people are catching on, and they're doing all they can to hang onto power rather than do the will of the people. The new gun control laws have nothing to do with schools, and everything to do with propping up a failing state.

George Edward Green III has been a journalist since 1997, and written for several Technology, Financial, and Libertarian Publications, and lives near L'viv Ukraine