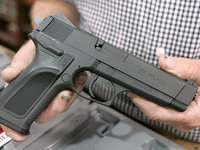 The NRA made a good point in their TV commercial that comrade Obama's family is protected by guards but Obama does not want America's children protected. Governor "Brown Noser" Christie did not like the ad whatsoever saying, "It's awful to bring public figures' children into the political debate." I guess he forgot about the children at Sandy Hook and the living children who need to be guarded. He also forgot that Obama used children himself to promote gun control while killing more children with drones. What did the majority of Americans do? Support Obama or buy more guns? Their efforts and conclusions vary but they continually missed the target.

The NRA is right, Obama is an "Elitist Hypocrite" but he is actually worse than that. He is a liar and a murderer causing chaos in America and the world. Obama's sins multiply more than Dorian Gray's but people still think he looks good. Looking good is all that matters in America, right? The list goes on: he raised taxes on everyone when he said he would not; killing innocent people with drones; executive privilege in "Fast and Furious"; the so called "Arab Spring"; promoting abortions; lying to Russia and pointing missiles at us; paying off his communist buddies to hire Russians to protest against Putin; no effort to lower the US debt by even one penny, etc.. Yet, most people still love him in the US. Those against him stand firm. Obama and those who own him cannot force Americans to give up their guns now, but he will eventually.

Kill one and the herd will stampede in the direction you want them to go. The US government may have massacred its own people killing their own citizens like in the ex-Soviet Union. However, they cannot just simply take away all the guns today. If they did all Americans would sober up and fight. Instead, according to the Communist plan, the government needs to persuade and establish laws to destroy the 2nd amendment year by year. Sandy Hook was a hoax per citizen journalist Brendan Hunt. I tend to listen to a citizen journalist rather than the mainstream media. Hoax or tragedy as other past shootings were, they seemed senseless but had a diabolical purpose. Massacres to herd the masses to accept gun control. It is just the beginning. The massacre of the innocents. Real or not they have their purpose.

What did most Americans do? I saw people on TV who felt guns were the evil culprit. Perhaps they preferred murder in another way like being pushed out of windows. Those people might prefer murder by knives or drugs since it is quieter and maybe more popular. It certainly is cheaper. Some felt guns promoted violence as though throughout history men have always had guns. Yes, that's why the Romans had wars. Caesar had an AK47 with him always. You know, if Genghis Khan didn't have that AR15, so many people would not have been killed. Tell old Joe Biden if there had been gun laws in the old West the Civil War never would have happened and the Native Americans never would have fought with each other before the Europeans came. It's so true because a movie star said so.

I heard useless laws by a useless president and people buying more guns. I can understand why people bought more guns as they can clearly see Obama's intention. I agree they need to protect themselves. Obama obviously does not want to guard children in schools. It's too expensive. He feels it's cheaper to have more kids than to prevent their deaths. He's just trying to reduce America's debt. He feels the coffins are smaller and therefore economical. All Americans should be against him because of that. There were no major protests in Washington last week and I definitely did not see a major movement to restore America's soul.

"Prepare ye the way of the Lord, make straight his paths" are words we should live by daily.  However, prayer, penance and fasting are not the norm in a country in dire straits. America was a country of religious freedom. "In the beginning of the contest with Britain, when we were sensible of danger, we had daily prayers in this room for Divine protection. Our prayers, Sir, were heard, and they were graciously answered... do we imagine we no longer need His assistance?" - Benjamin Franklin. In today's America, an atheist or the ACLU would have sued Franklin.

Were all the churches filled, men rushing to become priests and women joining monasteries in the US? Did Hispanic and Black gangs repent giving up their guns and turning to Christ and accepting White people as their brothers and sisters? Were all the TV's turned off and families joined in prayer and fasting doing penance for the sins of their country? Was this America's popular choice? I hope it is and maybe it just went unnoticed.

Know your enemy America. Fight or die. "Be sober and watch: because your adversary the devil, as a roaring lion, goeth about seeking whom he may devour". The devil never sleeps and knows your weaknesses, but we know his. Christ defeated him on the cross and won our place in Heaven if we but follow Him. Victory can be America's and Obama can be a storm soon forgotten if the country listens and obeys God.

When will someone tell Obama or his followers like Christie, "Begone, Satan: for it is written, The Lord thy God shalt thou adore, and him only shalt thou serve" and not Obama. They also should not follow sport heroes, movie and music stars or Obama. They are idols before God. These superstars are only super rich and famous because people in America follow them. If Americans gave their money to churches or to their education instead of to their entertainment, life would be a lot different. Serve God who created you and this universe. Has America chosen to serve themselves? I've seen Americans who happily serve Obama. They see freedom in that especially since he is the first Black president (they forgot he's half white). Some see no freedom in serving God. How can they?

"Drug, sex and rock and roll" in America's coliseum, the TV, are like "bread and circuses" in ancient Rome. The devil has sifted them as wheat. Laughing at their misery and death; catching each soul one by one. People continue to wonder, why the misery, why the deaths. Satan sneers and laughs at their tears. Only the faithful will survive or wear the martyr's crown. Devils are screaming and shouting in the US media promoting life that is contrary to Christ's teaching. Freedom to do evil is protected by law.  No country is perfect but America is near the point of no return. It will be destroyed unless they turn to the guiding hand of God as their Founding Fathers did.

" It is impossible to rightly govern the world without God and Bible." - George Washington. I have read books that have had original quotes by Washington, Jefferson, Adams, Franklin and others. I am amazed at how the US is today. It's as though they study only TV and the internet at schools and universities. I guess they don't teach the American Revolution and the Founding Fathers in American schools anymore. Long ago, a Roman teacher complained his students only talked about gladiators, the games, popular harlots and failed to study their history.

As I wrote in my article, "Communist Victory Amerika", Penance is necessary. "Christ's death on the cross is nonsense to those who are being lost; but for us who are being saved it is God's power" - St Paul.  The people of Rome no longer have slaves and persecute Christians in the arena. Follow Russia's lead out of the same tyrannical darkness. Repent or be enslaved.

I hope buying more guns or following Obama is not America's only response. They keep missing the target. Gun laws or more guns are not the answer. They should focus on Christ and His teachings. The goal, the answer is Christ. Maybe the NRA will put out an ad to follow Christ and to worship Him alone or at least about the Faith of their Founding Fathers. ACLU be damned for fighting against Christianity in the US. The ACLU and atheists are fools and care not for your souls. America, do not forget God or He will forget you. Kneel and pray every day for the Lord of Hosts will do battle for us.

Does Obama speak of traditional values, spirituality, morality and guide American Christians? The Christians who voted for Obama, especially the Black Christians, should be ashamed of themselves and beg God's forgiveness for preferring a Black president instead of a true Christian for president. Christianity in Russia has been reborn and Christ is once again accepted by the government. President Vladimir Putin still points out Russia's spiritual flaws, its "deficit of spiritual values".

The western media continually lies about Putin and Russia to its people, especially MSNBC who literally worships Obama. So, below is a video you can see that was censored by Fox News, CNN, ABC and the rest. After watching it; courageously ask yourself why they keep this and other religious news about Russia from you. The answer is clear. It is the same reason the Communists enslaved Russians for almost 75 years. They think religion is the opium of the people.

Author`s name Xavier Lerma
18:54
Ukrainian soldier uses chainsaw and fire to release US howitzer from ice trap
18:30
Onet: Ukraine will lose in six months due to shell shortage
17:36
Russian troops defeat Ukrainian troops in Zaporizhzhia region
14:50
Number of foreign mercenaries in Ukraine continues growing
14:17
Russians buy more than 50 tons of gold in 2022
13:57
Russia will not talk to Ukraine. Russia will talk to the West
13:34
USA's plan to give 20 percent of Ukraine for peace hoax
12:51
Medvedev: Ukraine as a state to be devastated, go bankrupt and be turned into colony
19:57
Russia will use all of its military potential to counter Western arms supplies to Kyiv
18:34
Biden changing strategy on Ukraine to reach diplomatic solution with Russia
The West prepares army to invade Russia