Venezuela is buzzing with the news that President Hugo Chávez is ever more likely to return from his enforced absence in a hospital in Havana, Cuba. Venezuelan diplomat Roy Chaderton has confirmed that the return of Hugo Chávez is "more and more certain". 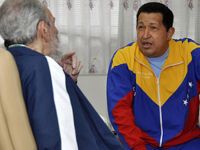 Chaderton made his declarations to Venezuelan State TV Telesur today, claiming that there is a "stronger and stronger possibility" that Chávez will return to Venezuela and retake his functions. He had already stated to a meeting of the Organization of American States that since Hugo Chávez came to power in 1999, the Venezuelan people became educated.

Hugo Chávez went to Cuba on December 11 for a fourth operation for cancer. He was unable to be present at the inauguration ceremony for his new mandate after victory in the 2012 election. New malignant cancerous cells were discovered in his pelvic region, in which he had previous operations to remove tumours.

The latest news is that Chávez is alive, well and working from his bed as he recovers from a delicate operation in Havana. When he was first diagnosed with cancer in 2011, he requested that technicians created a digital signature for him so that he could sign decrees via the Internet. This is what has apparently just happened with the appointment of Elías Jaua as Venezuela's Foreign Minister, dated January 15, 2013.

The opposition politicians in Venezuela are complaining, but the fact remains that in this day and age, the electronic option is viable and Hugo Chávez saw the need almost two years before he used it.

Hugo Chavez, apart from his democratic socialist policies which have created a new middle class in Venezuela, a country which was caught in a medieval regime ruled by a corrupt oligarchic clique of elitists, has spread his governance abroad: poorer families in the northern states of the USA can obtain oil cheaper for their energy needs.

Apart from this, he has a new vision for world governance: to expand the UN Security Council to include more countries from all regions of our planet; a new policy of transparency with more effective methods of crisis management; the suppression of the anti-democratic veto at the UNSC; the strengthening of the powers of the Secretary-General of the UNO - a re-founding of the UNO with powers which are adequate to handle the issues of today's world.

Internally, Hugo Chávez has brought healthcare and education to the people, in just 12 years. Consultations are provided for free, medicines are distributed free, 24 hours a day, to the people of Venezuela in the Barrio Adentro programme. The Mercals (state-subsidised grocery stores) provide staple products for reduced prices, making foodstuffs available for all.

Certainly, there is far more to do. But Hugo Chávez has identified the key question: an educated people can create their own welfare conditions, the perfect answer to those who brand him a "dictator". What dictator is democratically elected, and what dictator educates his people?

Viva Hugo Chávez! You have far more to do! In Venezuela and in the world!