Is 'Rapism' the New Indian Culture? 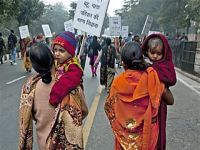 I feel very angry...very upset. Not, just because the innocent Delhi girl was raped and murdered. Not only because, as the country and the governance try to redress the situation through strict policy measures, more and more girls are being raped, disfigured and burnt; but because I belong to the new Indian Culture. Don't get me wrong...I am not talking about Post Modernism, neither about Post colonialism...but about the New Indian Order, that I name Rapism.

The world, at large, knows India, as the land of Goddess worship, piety and rectitude. Yet, who would measure the agony of the human heart caught within an Indian woman's anatomy? One is a woman...one is automatically an object. From sophisticated propositions to the cruder attacks on her existence and will, sexuality is the buzzword and the structural masculine monopoly spells power. The effect is pretty sharp for all known purposes. Not only does it destroy the womanly possibility of "Production" "for"  their community, the unpredictability of this 'rapier' power serves to terrorise the community and warn one and all about the futility of resistance.

The age old romanticisation of the commodification culture has led to the formation of a tough ideological barrier, which is unquestionably tougher than the age old ideas of male privilege, right wing misogyny  and liberal smugness. This, being the new cultural, intellectual and media milieu in which it becomes virtually impossible to create and serious social dialogue about the phrase

India has been a culture, where sex and sexuality have traditionally been revered. With change in time , however, we tend to have become a sex obsessed culture, where the 'self' defence and gratification of animal desires is the best example of the globalised or free-market ideology...or  should I say, that one need not , now even visit the market? Like everything else, instant gratification is at hand!  All you need to do is, feel  the urge, grab a girl and  that's it...The war of the sexes leads to the primary fantasy of humiliation and/or rape. How can acts of domination and violence lead to love and peace when the basic masculine attitudes of trophy display and bragging as essentially the 'normal' rituals of male bonding are aggravated by all social and neo-cultural forms and forums---and not to say, women collude as well...

Right from the masculine culture of oral pornography, where men brag about their masculinity and dominance to how they 'put women in their places', this sexual talk might get more benignly competitive as in 'how great a lover he is', 'how happy he can make a woman', 'how women cannot resist him', etc etc; which is nothing else but the basic idea of aggression implanted in the male psyche. The dual Indian psyche of domination  in domesticity  and the control of freedom in buying servility through acts such as verbal or physical rape of women, are solid representations  of the neo liberal ideology which believes, that like everything else, sexuality is for sale. Films, newspapers, music, television and the other media , capable of influencing the human mind, scream out, loud and clear that the colonisation and expropriation of the female body is  just fine...because, she just has a body, when does she have a mind?  Also, these are happily sacralised by a rather putrid association with 'freedom of thought and speech' which easily obviate any need to take the lives and deaths of physically humiliated women seriously.

The security of about one-half of the earth's human population is at stake. When Nostradamus predicted about  our  present phase, he depicted a man attacking  the womb of Mother Earth, with a bow and arrow in hand. The womb had a woman.  Are we actually hell bent on raping our existence and killing ourselves by humiliating and desecrating the Feminine Powers? If, so, then, we are inching closer to disaster.  One cannot predict the time,  but a negation of human goodness cannot uphold human existence for very long.  We are passing through a tough transition period. One, that urgently requires that we learn to collectively take the human responsibility of the horrendous changes around us. India, now, more than ever, requires the grace of humanity and peace. We need a cultural renewal,  an act of submission to faith. Hopefully, the next time, a boy in the family, insults a girl, the household "goddesses" will not encourage the act in the name of masculinity. If, however, that happens, they have failed to recognise themselves...and for sure, women in forgetfulness will never be able to give a dignified identity to men who are their sons...lives, then we say, do come a full circle!