4 fatalities among the 8 occupants of the Tupolev 204-100V Red Wings Airlines which crashed at VKO Moskva-Vnukovo Airport on December 29 at 16.33 local time, overshooting the runway and hitting the embankment of the M3 motorway before the aircraft was destroyed. Among the hysteria in the western press, let us try to pinpoint the truth. 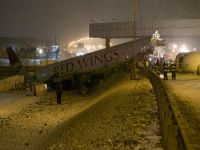 The first reaction in the international community was sickeningly predictable: Russian aircraft and Russian pilots. For those of us who understand something about aviation, both notions are as predictable, primary reactions among the ignorant. Russian pilots are in general among the most experienced in the world and Russian equipment is of the highest standard, the military aircraft being far superior in technical terms and structural engineering to anything NATO can cook up.

Its first flight was in 2008. The aircraft, belonging to low cost airlines Red Wings had taken off from Pardubice Airport (PED) (PED/LKPD), Czech Republic at 11.10 local time destined for Moskva-Vnukovo Airport (VKO) (VKO/UUWW), Russia, approaching runway 19 from the north at 16.33 local time.

Eye-witness reports quoted by western media sources indicate a "heavy landing"; this in aviation terms is as absurd as it is ridiculous since a "positive" landing is what Russian pilots have to become accustomed to, slapping the aircraft down on the runway, dispelling kinetic energy and getting the aircraft under control in inhospitable conditions, often with heavy winds and heavier gusts.

The airport NOTAM  informs that runway 24 has been closed since December 19. Could it be that runway 19 was substantially shorter, contaminated by ice and with gusts of wind rendering an approaching aircraft particularly vulnerable under these conditions?

Of course only a full investigation, such as that launched by the Russian Aviation Authorities will provide an answer. My take is that it was the runway contaminated with ice, possibly shorter than the crew needed in the circumstances, certainly not Russian aircraft or pilots.

What the west should investigate is the cases of sabotage against Russian airliners every time one makes an exhibition flight. Now THAT is increasingly suspicious and something that has been gnawing at me since the Tupolev 144 at the Paris Air Show in 1973 to the Sukhoi-100 Superjet in Indonesia in May 2012.